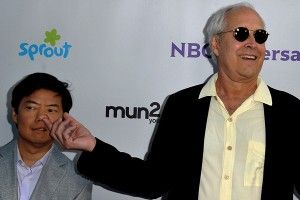 For a while now, Community‘s endless fount of crises — beloved showrunner fired, time slot moved to Friday night, return of show delayed indefinitely, etc., etc. — has been kind of hilarious. Sure, yeah you feel bad for all parties involved, but they’re all rich people and they all seem to be taking it well. So why not have a chuckle at the expense of a sitcom somehow attempting to re-create the Book of Job? This latest flare-up, though, is, uh, just really depressing.

Deadline reports that shooting on set was temporarily halted when Chevy Chase, who plays creepy rich guy Pierce Hawthorne, caused a commotion by using the N-word:

It appears that the tirade was not addressed at Black cast members Donald Glover or Yvette Nicole Brown. People close to the situation say that Chase had been increasingly frustrated and uncomfortable with the direction of his character, Pierce, who is a bigot. After getting fed more lines he found offensive during a scene yesterday, I hear he snapped and launched the tirade, airing his frustration and suggesting that the way things with Pierce are going, he may next be asked to call Troy (Glover) or Shirley (Brown) the N-Word. I hear the outburst upset the cast. Chase later apologized.

And somewhere out in California tonight, Chevy’s nemesis Dan Harmon is mouthing the words “I told you so.”