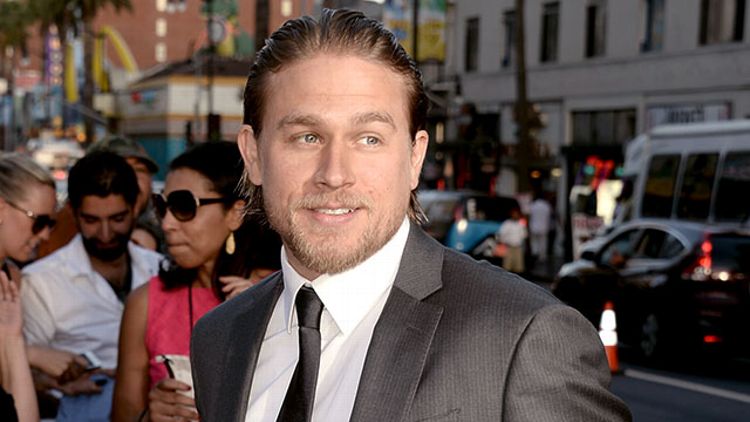 When the makers of the Fifty Shades of Grey adaptation promised that the movie would faithfully depict the book’s sexual torture and Twilight erotica vibes, it seemed unlikely that any major A-list actor would be willing to put his dick on the line for the project, no matter how hot the buzz. Better to cast hungry up-and-comers who would do anything to become a recognizable name, even full frontal. While author E.L. James envisioned sexual sadist with a secret Christian Grey as a cross between Robert Pattinson and Ryan Gosling, neither expressed any interest in the role. Next in line was Garrett Hedlund, who reportedly claimed he didn’t want to commit to a potential trilogy. British actor Christian Cooke was named as a contender and then mysteriously was no longer in the running. Charlie Hunnam, the U.K. actor who had a hit this summer as part of the Pacific Rim ensemble, said no. But then he was courted by some of the studio heads coproducing the film, and I guess they made a good argument because he signed on in September.

Sometime in the month after signing up, though, Hunnam must have had a change of heart, because this weekend it was announced that he was dropping out of Fifty Shades of Grey. Although Hunnam’s official reason was scheduling conflicts with Sons of Anarchy, insiders say it was cold feet about the movie’s sex scenes and down-market prestige. The project is both coveted and untouchable among young actors. It will either be a huge hit with its intended audience or a laughable bomb on the scale of Caligula, punished for the sin of trying to combine mainstream entertainment with pornography. Fifty Shades will probably end up being more softcore than the book, if only to avoid a pre-release paddling by the MPAA. If the script is anything like the book, it’s probably embarrassing to read, let alone speak. Maybe Hunnam realized he sounded ridiculous just practicing his lines as Christian Grey, and jumped ship before the final exam.

Hunnam is best known in the U.S. for his leading role as a biker Hamlet named Jax Teller on FX’s Sons of Anarchy. In the U.K. he is probably still better known for his part in the original groundbreaking Channel 4 drama Queer as Folk, in which he played 15-year-old Nathan Maloney, a newbie in Manchester’s gay club scene. Hunnam had explicit sex scenes on Queer as Folk, which made him seem like a not-terrible fit for the Christian Grey role. At least he had prior experience being naked onscreen, and probably already knew his way around a cock sock. Dakota Johnson, the daughter of Melanie Griffith and Don Johnson, signed on to play virginal heroine Anastasia Steele opposite Hunnam’s taskmaster Grey.

So what is to become of Fifty Shades of Grey the movie? With shooting scheduled to start next month in Vancouver, a replacement list of dominating males will have to be drafted at warp speed. Producers might return to some previous names tossed out, such as Ian Somerhalder and Matt Bomer. Grey is written as a skinny white male businessman in his late twenties, and some fans were angry that Hunnam was cast because he wasn’t accurately pallid and raven-haired enough. Those fans were also angry that blonde Dakota Johnson was cast, when Anastasia Steele is written as a Snow White type, not a Sleeping Beauty. Maybe it’s best that Fifty Shades of Grey falls apart before a camera even rolls. At best, if they rewrite the book it works as a sexual psychological thriller. At worst, it will be a complete fiasco. Assuming Johnson and Sam Taylor-Wood stay attached and the production remains on schedule, they’ll need to work fast to finalize a male lead, especially if they’re going for a name. Just get James Franco. You know he’ll be down.