Cannes Interview: Rooney Mara and Casey Affleck on Ain’t Them Bodies Saints, Their Career Choices, and the Joaquin Debacle 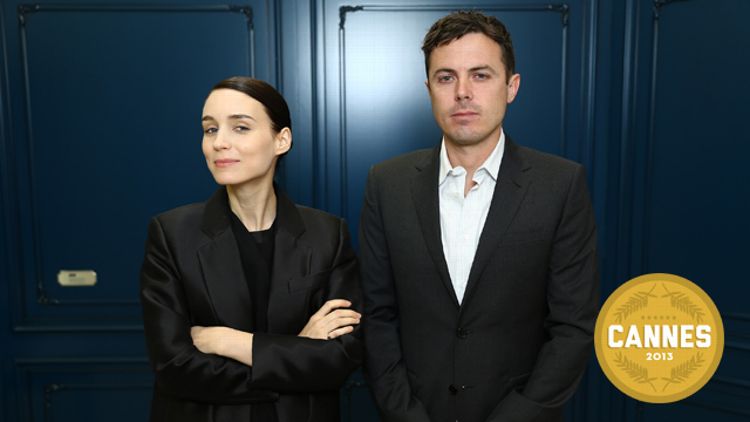 The first thing I said to Rooney Mara was so wrong, it turned out right.

It’s the Sunday midpoint of the Cannes Film Festival, and I’ve just sat down in a subdivided hotel ballroom across from Mara and Casey Affleck, costars of Ain’t Them Bodies Saints, the moody, Malick-esque criminal lovers odyssey from young American writer-director David Lowery. The stunning Saints, which premiered at the Sundance Film Festival in January, had reemerged the evening before in a streamlined new cut, as the big Saturday-night screening of the Cannes sidebar Critic’s Week. A massive crowd had huddled in one of the worst downpours in recent Cannes memory in hopes of getting into one of the festival’s smallest venues to see the film. Most of those people were turned away; those who did get in mobbed around the stars before the movie with cell phones aloft; the amateur paparazzi attack continued after the movie, amid a standing ovation. My summary of the evening/attempt at an Affleck/Mara icebreaker went like this: “The screening last night was so intense.”

With her china-white pallor, her dark hair pulled back tight, and her bones shrouded in a shapeless black blazer, Mara fixed her laser-beam eyes on me and breathed two syllables of pure acid: “It was?” It stung — and it was perfect, it was exactly what you’d want from her. It was Full Rooney.

That this withering withholding, this obstinate untouchability, is (a) Mara’s commodity, and (b) actually selling, is kind of thrillingly nuts in an age defined by “just like us” stars and fake digital friendship. Lowery, a multitalented veteran of the American indie scene who had never worked with name actors or a budget higher than five figures, says Mara was the first and only actress he approached to play Ruth, the young mom at the center of a slow-burning love triangle between her prison-breaking baby-daddy Bob (Affleck) and the cop who’s looking for him (Ben Foster). She read the script while The Girl With the Dragon Tattoo was in theaters, when she probably could have picked anything. Was she concerned about stemming the tide of her skyrocketing stardom by hitching her wagon to a potentially risky art movie from an unknown filmmaker? “First of all, I don’t think of myself like that, so I don’t think of it in terms of that,” she says. “I just read a ton of stuff and this was the thing I responded to the most.”

Casey Affleck was, likewise, the first person Lowery thought of for the role of Bob, who takes the fall for the pregnant Ruth and goes to prison, then breaks free and tries to make his way home. With these two onboard, in the spring of 2012 financiers started lining up to provide the movie’s $3 million budget. After taking meetings in L.A., Lowery holed up at Shane Carruth’s Dallas home to edit Upstream Color, where he found himself stepping away from cutting Carruth’s instant cult classic to take conference calls with the likes of Harvey Weinstein.

It’s nothing new for a pair of celebrities to serve as the security on an indie-film gamble, but it still seems notable that Rooney Mara + Casey Affleck is an equation that gets a fledgling writer-director’s elegiac, morally ambiguous quasi-Western made. Between the aggressive invulnerability that made Mara a star under the auspices of David Fincher, and Affleck’s résumé chock full of criminals (The Assassination of Jesse James by the Coward Robert Ford, The Killer Inside Me) and criminally unpopular experiments (Gus Van Sant’s desolate Gerry, Affleck’s own faux-doc directorial effort I’m Still Here), both performers have built brands based on a certain type of seductive instability.

Their uniqueness within Hollywood is thrown into relief by their mutual status as the younger, weirder half of movie-land sibling acts. This is not, according to Lowery, mere convenient Hollywood packaging, the necessary cosmetic differentiation of two people in the same industry with the same last name. “I think it’s one hundred percent true to who they are,” the filmmaker says. “They do things their own way.” At the very least, it’s impossible to imagine Rooney taking a four-episode love-interest arc on Entourage, as her sister Kate did; it’d be almost as weird if Casey were to cast himself in an American-hero part like the one brother Ben took in his Oscar-winning Argo. Kate and Ben are both really good movie stars in that they excel at inviting audiences into what they’re thinking. They’re maybe marginally more conventionally good-looking than Rooney and Casey, but they’re also just plain conventional. The whole point of the younger Mara and Affleck are that they’re a little bit off. They’re unknowable, at least vaguely threatening, and bad-idea sexy because of it.

This thing they have in common, this weirdly alluring moral and psychological opacity, drives their characters’ relationship in Saints; they make you believe Bob and Ruth are inextricably linked in scant minutes of screen time at the beginning of the film, creating a palpable bond that carries through the lovers’ nearly film-long separation. How did they do it? True to form, Affleck and Mara seem equally resistant to putting their process into words. If they were pitchers, you could say they hide the ball well. “We didn’t really do anything,” Affleck says. “I don’t have to find the character, David wrote the character,” Mara adds. “I just have to show up and do the lines.” While waiting for the other person to answer, each of them disappears, adeptly flicking a virtual “back in 5” sign over their eyes, then snapping into autopilot when asked a direct question.

They engage in something like banter exactly once. Dancing around my question about his iconoclastic choices, Affleck says, “I do think people do pick movies that reveal something about them that they aren’t always aware of. If you ask them what kind of an actor they think they are, they’ll probably tell you something different than what they’ve actually done. That said, for some reason I’ve wound up being murderous criminals in a lot of movies, and that’s not really a part of who I am — ”

“Yet,” Mara interjects, with an actual, apparently unforced smile. (She’ll give up another one of those — a knee-jerk, knowing but not necessarily telling grin — when I mention her Side Effects director Steven Soderbergh’s allegedly impending retirement.)

As many outlaw roles as Affleck has racked up, he insists he doesn’t want to be perceived as an enemy to the status quo. “I like studio movies, I love big commercial movies,” declares the actor, whose last theatrically released project was Brett Ratner’s Tower Heist. “I don’t want to be known as someone who is deliberately trying to do things that are not commercial! That is not a good reputation to have when you’re trying to be a working actor.” The last thing he wants, he says, is to be marginalized alongside artists he deems “more sophisticated and more artistic than I am, [like] David Lynch or Harmony Korine, people who are deliberately subverting the form in some way.”

But what about I’m Still Here, the 2010 film he directed, “documenting” the public transformation of his best friend and brother-in-law Joaquin Phoenix from acclaimed character actor into hirsute hip-hop upstart? Wasn’t that, as a genre-bending, wide-ranging, highly committed conceptual stunt on — and, knowingly or otherwise, abetted by — aspects of the industry and the entertainment media, a deliberate subversion?

“It was,” he concedes. “That was a little bit of a subversion. Maybe the most premeditated subversion that I’ve made in my career.” Essentially an experimental fiction film presented in documentary style, I’m Still Here was, Affleck suggests, drastically misinterpreted. “Which maybe just says I didn’t do a good enough job. I thought it was a comedy. Other people didn’t find it all that funny.”

Did it make his life as an actor more difficult? Affleck sighs. “That just made my life more difficult in general. People responded so badly to that movie and it was so misunderstood. I don’t know if I would do things differently, but I would definitely be more careful about how it was done. I think the idea that Joaquin and I had of trying to make a movie that was — you know, we didn’t tell people, we said ‘this is a documentary’ — I think that made people feel kind of cheated, or lied to. It made them angry, everyone from the press — some of whom were very nasty about it, and wrote really mean-spirited stuff about it — to people who were around the movie and felt like they were involved and should have known more.” Even if the knives hadn’t come out, the production took Affleck away from acting for two and a half years, which if nothing else derailed his momentum. “That’s the nature of the business: It kind of sets you back if you aren’t out there working,” he admits. “It sort of takes awhile to get going again.”

It’s not lost on Affleck that with Saints he’s reentering the leading-man fray by playing an antisocial character working his way back from exile. “That’s the kind of thing I’m talking about — the stuff you’re sort of subconsciously drawn to, when you read something or you decide to join a movie. You know, I would say, ‘I took this movie because it was so well written, and the director was such a smart, nice guy,’ but maybe I was also responding to the part in some way, of him trying to get back home.”

This is where the Saints stars diverge: While Affleck is self-consciously trying to make his way back into a working niche, Mara is blithely anti-careerist. Saints comes out in August, and she’s already shot Spike Jonze’s Her and the untitled, Austin-set new one from Terrence Malick — of which she says, simply, “I hope I’m still in it” — and with those films awaiting release, she says she’s in no hurry to make another. “Right now I’m not really doing anything,” Mara declares flatly. “I’m taking some time off, trying to find something to do. Haven’t really found it yet. I feel like I worked too much last year. I’m sick of myself.”