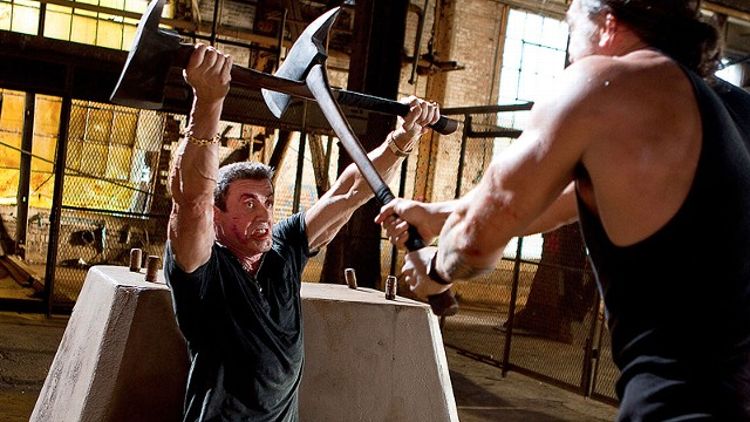 You could empty a bottle of Zoloft being sad about Bullet to the Head. It was directed and cowritten by the man who made The Driver, The Warriors, 48 Hours, and Trespass, and who either cowrote or coproduced the entire Alien series — Walter Hill. It misses being John Woo’s Bullet in the Head by both a preposition and about a million miles. It stars Sylvester Stallone. I don’t know what the movie’s about. Men go crashing through cabinets at a tattoo parlor and appear to bleed tomato paste. The finale is set in a vacant warehouse, which at this point in action-movie history is like giving your wife a vacuum cleaner on her birthday.

Stallone is Jimmy Bobo, a Hit Man Who Reluctantly Teams Up With a Renegade Detective (Who’s Also Reluctant About the Team-Up). They’re trying to bring down a New Orleans crime syndicate that’s composed of a crippled African, the guy who played Conan the Barbarian (Jason Momoa) in that remake two summers ago, and Christian Slater. The money spared for exciting locations was spent to hire extras to fall down the stairs in generic ones.

It’s possible for a director to phone it in. He can just copy car chases from other movies and make sure he’s hired a cinematographer who can at least make him look as though he cared. Even though the movie looks bad, Hill’s not pretending. He gives us pivotal flash drives, editing designed to flicker like the flame of a dying match, and at least one line that he more or less stole from Marcia Gay Harden in Pollock. (“I think I broke this whole thing wide open.”) The violence seems like it hurts, and all the tattoos look real. That renegade detective is played by Sung Kang, who reacts to a wallop to the stomach as though Stallone actually hit him, which feels authentically Walter Hill.

But people don’t go to the movies just to feel like they’re still home watching Showtime Extreme or wishing they were outside the bus terminal rifling through their bootleg-DVD dealer’s collection. Bullet to the Head is the movie in the pile that you didn’t know existed. The saddest thing about it — besides the fact that it exists — is that it exists with Stallone. It exists with Stallone playing a role that reeks of having been turned down by Steven Seagal and Jeff Fahey.

At one point in the movie, mugshots of Jimmy Bobo appear, and they might be some of the most depressing images of the year. One by one, the mugshots fill the screen, these images of Sylvester Stallone — in his 20s, in his 30s, maybe in his 40s, this young, pretty, but dangerous-looking man. There’s the threat of a mugging in that face. There’s the threat of sex in it. Then there’s a cut to a version of the loosely preserved Stallone we’ve got in this movie and you want to get up and leave the theater. Stallone is 66 now, but it isn’t age you see in his hulking, fatless physique, with its Partonesque chest and its clammy, veiny skin (inked here with body art). What you see is unnatural. It’s the action hero as melting candle.

Stallone has always been an awkward star and not because of his sludgy diction. In the original Rocky and Rambo, the diction made him an original. Amid the great, ethnic, and average-looking stars of the 1970s — the De Niros, Pacinos, Hoffmans, and Nicholsons — Stallone used physicality to muscle around actorly impoverishment. He was the bridge between the non-classical-looking gang of that era and the brute-force action figures of the 1980s. But after two Rockys and two Rambos, with everything from Over the Top and Cobra to directing an oiled-up and loin-clothed John Travolta in Staying Alive, Stallone quick-dried into caricature. He was too insecure to be more on screen than arbor or statuary. The shock of his Expendables movies is how seriously they take themselves. They’re farces that don’t know they’re farces. He’s not kidding with those films or with Bullet to the Head. There doesn’t appear to be much else Stallone can do with that face (it no longer moves) or that enormous body, whose joints appear in need of oil. In one scene, he leaps for cover and it’s like watching a tree fall.

He might not be too old for this shit. But aren’t we?