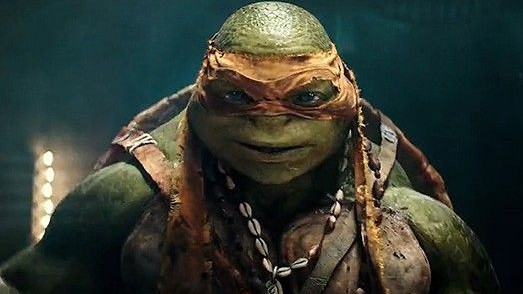 $28.4 million: The American total for Teenage Mutant Ninja Turtles, giving the reboot the no. 1 slot for the second straight weekend. That’s a 57 percent dip from the $65 million opener, but the overall box office is still up 6 percent from the same time period last year, and August “remains on track to be the biggest ever at the domestic box office with around $1 billion,” Box Office Mojo writes. Internationally, the Turtles have $185.1 million in their pockets. I wonder what Will Arnett’s payday looked like. I also wonder what Megan Fox’s payday looked like compared to her Transformers paydays.

$24.7 million: Guardians of the Galaxy’s third-weekend domestic take. The film stayed in the no. 2 spot and managed to pass the $400 million mark worldwide. Guardians has now usurped Thor: The Dark World’s American total and will soon blast beyond Captain America: The Winter Soldier as well.

3: New movies that landed inside the top five this weekend.

$17.7 million: Opening-weekend earnings for the spectacularly untimely Let’s Be Cops, starring New Girl’s Jake Johnson and Damon Wayans Jr. It’s not a huge opener, but (a) it earned back its budget, and (b) it opened higher than Adam Sandler and Drew Barrymore’s Blended ($14.3 million), Jason Segel and Cameron Diaz’s Sex Tape ($14.6 million), and Seth MacFarlane’s A Million Ways to Die in the West ($16.8 million). Maybe it was a case of mid-August Superbad nostalgia?

$16.2 million: Domestic opener for The Expendables 3. That’s the lowest-opening Expendables by a long shot — the 2010 original made $34.8 million on its first weekend, while the 2012 sequel opened to $28.6 million. Each movie opened at this exact point in the summer. The Expendables 3 hasn’t premiered abroad yet, though, and each of the first two films made considerably more overseas than at home.

$12.8 million: American total for the 21-years-late adaptation of Lois Lowry’s The Giver. That’s the sixth-best opening for director Phillip Noyce (Salt, Clear and Present Danger). Box Office Mojo writes that The Giver “essentially wound up in the same realm as recent young-adult flops The Host, The Mortal Instruments: City of Bones and Beautiful Creatures.”

1: Articles about going to the dump with Lois Lowry the world received thanks to The Giver: The Movie.

$2.7 million: Tiny second-weekend American total for Step Up All In, which has been playing abroad since early July and has an international total of $49.6 million.

2: Dumb and Dumber To parody posters Lucy is now popular enough to have inspired. The Luc Besson/Scarlett Johansson film passed $100 million in America this weekend and has $168.5 million including the foreign box office.

4: Days until Sin City: A Dame to Kill For can have a strong debut nine long years after Robert Rodriguez’s original film.

Filed Under: Movies, Box office, box office by the numbers, teenage mutant ninja turtles, guardians of the galaxy, the expendables 3, the giver, let\'s be cops, boyhood, Step Up: All In

Blockbuster Talk: 'The Expendables 3’ Could Have Used Some Reinforcements