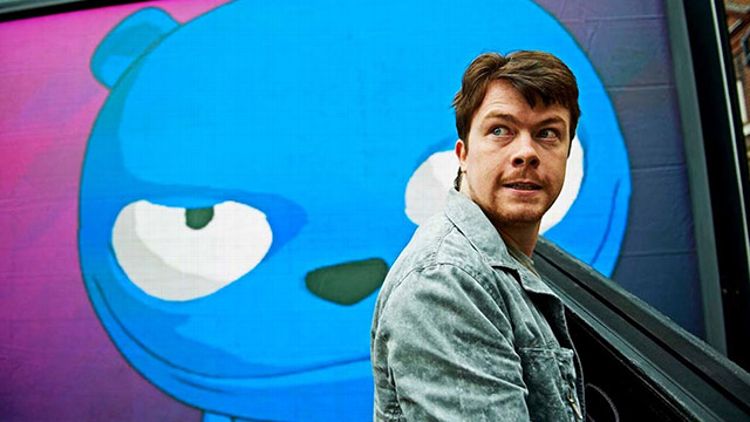 For the past six weeks, I have been responding to the British sci-fi series Black Mirror, which premiered on Channel 4 in 2011 and has wrapped up its debut on North American television via DirecTV. These are not meant to be strict recaps, but there will be plenty of spoilers, which, trust me, if you plan on watching the show, you do not want.

In its original airing on Channel 4, “The Waldo Moment” was the last episode aired of the second series, and a perhaps intentional return to something that looks like our present, a place we haven’t seen since the show’s opener, “The National Anthem.” It’s also a return to politics, which I find interesting: It’s not as if creator Charlie Brooker couldn’t tell a story about power and apathy in a far-removed future — plenty of sci-fi writers have done it before — but in the present it has more bite; there’s less artifice to hide behind. “The Waldo Moment” was originally an idea for Nathan Barley, another show Brooker produced with the yin to his yin, Chris Morris. Nathan Barley followed the exploits of the titular gen-Y “media node,” an idiotic Internet provocateur who is legitimized as a voice of a generation by the equally clueless mainstream media. Nathan Barley was apocalyptically obnoxious, its resounding stance seemingly that everyone’s a dummy and that the world — led by the media — is going down the toilet in a hurry. “The Waldo Moment,” though ultimately more earnest in execution and with fewer laughs along the way, leaves one with a similarly paralyzed sense of “well, shit.” Like “Fifteen Million Merits” it finds Brooker questioning his own agenda, as well as the agenda of anyone who mocks everything but does nothing.

Though it may seem to us in the States that the U.K. offers more of a platform for such dissent, the attitude is easy to find in U.S. entertainment, particularly that aimed at adolescent males. I’m as big a South Park fan as the next guy/girl, but even when watching its most cutting installments, I can’t help but think that it’s further bolstering a generation’s (or even two’s) apathy. What eventually burned me out on Grand Theft Auto V wasn’t the misogyny or violence, but the nihilism and the game’s crude excuse for “satire.” I can only spend so much time driving around a virtual replica of my city while being shouted at about how dumb and lame everything in it is, and I cringed thinking about the millions of angry teenagers also playing at that very moment who would soon be old enough to not register to vote. I say this completely implicating myself, by the way; like the “Waldo” puppeteer Jamie (Daniel Rigby), I’m not stupid or smart enough to do politics. I think there’s plenty of good, mind-expanding work to be done by anyone in the media (surely you, too, were thinking of Jon Stewart and Stephen Colbert throughout this episode, especially this), but I wouldn’t know the first thing about getting an air pollution bill passed. I imagine this is a sentiment shared by 99.9 percent of the population. Does that make us part of the problem?

One look at the crowd (seemingly pulled from the Sports Sesh studio) cheering on Waldo’s campaign against conservative politician Liam Monroe, and you’d think the answer was yes, but they’re not the villains of “The Waldo Moment.” They’re merely laughing at a bit of crude humor they think is funny; the real damage comes when the people in power (ultimately, absurdly, the CIA) believe they have no choice but to cater to that laughter. There will always be dumb people who want to laugh at dumb things, but leveraging that laughter for a position in office (as opposed to an actual concrete goal) is exactly the kind of craven behavior that makes people not trust politicians in the first place.

It will be interesting and possibly terrifying to see how political discourse evolves as the Like generation not only comes of age, but becomes candidates. Perhaps today’s 18-year-olds will have a better idea of how to mobilize tomorrow’s 18-year-olds, but the ever-steepening curve of technology means that the gaps between generations are widening with every passing decade. Caring about current events may go out of vogue, but as Monroe points out, someone still has to build roads. Politics isn’t like brick-and-mortar bookstores or movie theaters; just because young people don’t flock to it anymore doesn’t mean it will be phased out, even if the 2096 election is decided by 15 thumbs-up on FaceTube.

“The Waldo Moment” is usually considered the weakest episode of Black Mirror, and while its territory feels a little more familiar than the first five episodes, I still think its plausibility makes it a more thought-provoking watch than “White Bear.” But it does make one wonder about how much of Black Mirror’s appeal is its uncanny prescience. Brooker is currently stalled in an undisclosed stage of production for a third series of the show, and he told Digital Spy that the delay is a genuine concern. “We have so far been quite fortunate that everything has happened, just days after we’ve aired the episodes,” he said. “That is the annoying thing about the slight delay. I have these ideas, and if I don’t get them out quickly, they could actually happen in the real world. That’s a worry. Real life will overtake the show.”