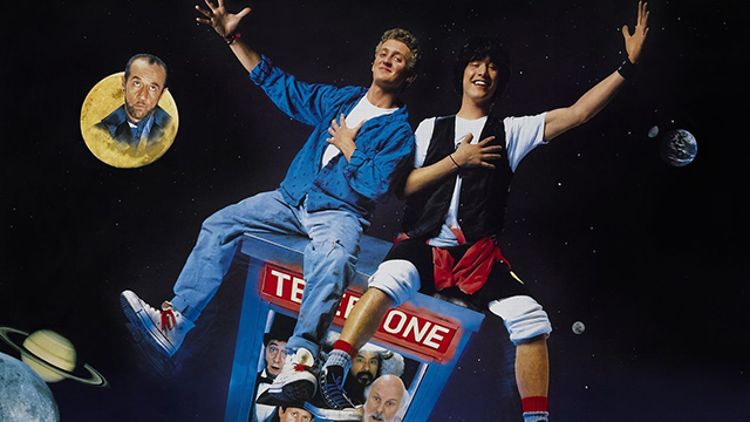 Have you ever found yourself lounging around in your Johnny Utah commemorative T-shirt, ordering the Blu-ray special edition of A Walk in the Clouds while listening to “Neodammerung” from The Matrix Revolutions official soundtrack and wondering Why isn’t there more news about Keanu Reeves? I mean, this is Neo we’re talking about, Johnny Mnemonic, the guy who once gave up a few million just so he could go toe-to-toe with Al Pacino doing this. Well, this morning is your lucky morning.

While promoting his directorial debut, Man of Tai Chi, at the Toronto International Film Festival, Reeves was subjected to no-holds-barred questioning by MTV News’s Josh Horowitz about the perpetual limbo of Bill & Ted 3. (What? You didn’t know that this was a real thing, with a script by no less than the original writers Chris Matheson and Ed Solomon? Shame on you!) Now, actors get this all the time. They’re asked for information by countless interviewers, bloggers, and men on the street (self included) about forthcoming sequels to beloved projects over which they have little control or insight other than to say “Summer 2015!” or “We’re just trying to get a script that isn’t a totally transparent grab at your wallet via your youthful nostalgia.” I mean, just Google “Bill Murray” and “Ghostbusters 3” to understand this phenomenon in all its relentless glory.

However, rarely do stars give an answer as cryptic, ominous, and confusingly sardonic as Keanu did. Batting around phrases such as “subterfuge,” “conspiracy theories,” and “it’s pretty dark out there” like overpumped tennis balls, Reeves eventually landed decisively on this Billy Corgan–esque koan of a non-answer: “There’s darkness out there that’s keeping it from happening.” Now, if you watch the actual video, you might surmise that the darkness Reeves jokingly refers to may just be his foreknowledge that this is far from the last time he’ll be asked that question. I like to believe that a cabal of sadistic, evil Hollywood executives continually blows money on needless rewrites to a Mozart-level masterpiece of a script, just to deny Reeves and fans the emotional catharsis of hearing the actual song that the Wyld Stallyns composed to bring about world peace on the off chance said song does in fact bring about world peace by leaving us all hopelessly hooked to our Spotify feeds, and thus unable to purchase tickets to Cloudy With a Chance of Meatballs 2 — forever ending Hollywood as we know it.

Or people could just be waiting to see how much money 47 Ronin will lose.

Afternoon Links: Is The Newsroom the Greatest Show on Television?