Barbie, Peeps, It’s a Small World — Anything Can (and Will) Be a Movie Now! 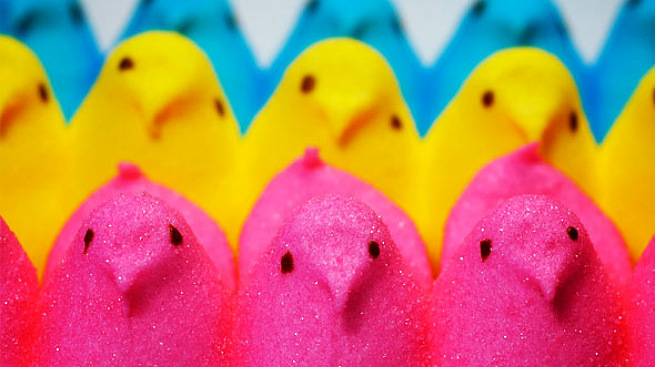 Since you’re already walking away and shaking your head, I’ll keep the details to the point.

Pedigree: Script’s by Jenny Bicks, who executive produced and wrote for Sex and the City and The Big C. Also penned the 2003 Amanda Bynes joint What a Girl Wants.
Plot/deetz: Deadline says it’ll be a live-actioner about Barbie using her many careers and costumes/“personal and professional skills” to “step into the lives of others and improve them, almost like a modern-day Mary Poppins.” Young performers will play Barbie, Ken, and Barbie’s TBD BFF, while bigger, interchangeable stars will hover around them. Marvel-style franchisedom is the goal.
Sony Pictures says: The “unexpected, clever, and truly funny concept … captures everything that has made Barbie a classic for generation after generation while also standing on its own, establishing Barbie as a truly original screen character.”

Why now? This year’s the 50th anniversary of the Disney boat ride’s debut at the 1964 New York World’s Fair.
Pedigree: Jon Turteltaub (3 Ninjas, Cool Runnings, National Treasure) will direct, The Lego Movie producer Dan Lin will produce, and Jared Stern (The Internship, Wreck-It Ralph) will write.
Plot: No indication. But franchise whisperer Deadline says, “this one will take awhile to come together but it is envisioned as a potential franchise for the studio.”

OK! Now, just to properly prepare ourselves: What else can we expect to see on IMDb in the next few years? Educated speculation:

Foods: M&Ms (inevitable ever since the TV commercials), Coca-Cola (should be terrible but will somehow be great because it’s Coke), Lunchables (every kid will love it even though it’s awful), Go-Gurt (The Blob–style retro horror flick), String Cheese (in which this chillingly Medusa-like mascot becomes a superhero).

Rides & Attractions: Terminator 2: Judgment Day Pinball (you’ll go twice even though you’ve got no idea what’s going on), The Teacups (most vomit-inducing cinematography since Cloverfield), Skee-Ball (better than Rollerball, worse than Baseketball), Indiana Jones Epic Stunt Spectacular! (something tells you that guy’s not really Harrison Ford, but something also tells you this is better than Kingdom of the Crystal Skull).

Filed Under: Movies, barbie, peeps, it's a small world

Look, don't judge Drake for lint-rolling his pants courtside at a basketball game. Shit gets linty sometimes, it's not like lint knows you're busy watching the playoffs.