Why wasn’t the trial by combat a push?

In a recent interview in Rolling Stone, George R.R. Martin denied the charge, quite often leveled by book readers, that A Song of Ice and Fire and Game of Thrones are the product of a nihilistic worldview. I don’t agree with that particular critique, but things like the trial-by-combat scene in “The Mountain and the Viper” (and its origin chapter) are why people proffer it. This story will not let you have nice things. In Book 1, the hero gets beheaded at the end. Book 2 is war and tragedy, the sack of Winterfell, the Stark boys cast out into the wilderness. Book 3 introduces the swaggering Oberyn Martell, the Red Viper, the only person in the books who, at that point, seems to be having any fun while trying to strike a blow for the good guys. Then you get the Red Wedding and all hopes for a Stark revanche are dashed; more than ever, you hang your hopes on Oberyn. And then he’s gone. After I finished reading the trial-by-combat chapter toward the end of Book 3, I remember quite distinctly thinking that Martin was an asshole.

Anyway, Oberyn Martell: million-dollar move and a 10-cent ending. Gotta finish that, my dude. Quit flossing. The reason it wasn’t a push is, very simply, that Oberyn’s head was a strawberry-jam ruin of bones, teeth, and brain, and the Mountain, while badly wounded, still drew breath. If you’re breathing at the buzzer and the other guy has no face, you win. The gods have spoken, and they are dicks.

Charlie asks, “I don’t remember how or why Jorah came to be a spy? I only remember him showing up before the wedding in Season 1. What’s the deal with that?”

Poor Ser Jorah, exiled from the Friend Zone into the Slaver’s Bay badlands and it’s hard to decide which is worse. Jorah is the former Lord of Bear Island, off the western coast of the North in the Bay of Ice. He is the son of the late Lord Commander of the Night’s Watch, Jeor Mormont. Jorah has had a hard-luck love life to say the least. His first wife died in childbirth. Later, while competing at a tournament at Lannisport, he met Lynesse of House Hightower, one of the noble houses of the verdant southern breadbasket of Westeros known as the Reach, which is ruled over by the Tyrells of Highgarden. Jorah asked Lynesse’s father for her hand in marriage and was given the OK. Well, as you might imagine, a highborn lady from what is essentially the south of France found the pleasures of Bear Island — in the Bay of fucking Ice, featuring picturesque views of a beautiful stretch of mainland beyond-the-Wall beach known as the Frozen Shore — just a tad unsatisfying. Ned Stark himself once described Bear Island as “cold and distant and poor,” and Ned loooooooooooved the North.

Answers to your burning Game of Thrones questions.
So, needing to raise the funds to keep the lovely Lynesse in the lifestyle to which she had grown accustomed, Ser Jorah, as many do in a tough economy, started up a side business selling dudes he caught poaching on his lands into slavery in the east. Two problems: Slavery’s not legal in Westeros, and Warden of the North Ned Stark was kind of a stickler about stuff like this. Ned found out, and Jorah got wind of it and fled for his life to Essos, Lynesse in tow. Finding herself first marooned on a frozen rock with a northern view of Wildling country, and now a refugee in Lys (famous for its prostitutes and poisons), Lynesse was understandably unhappy, and when Jorah was out on a sellsword campaign, she took up with someone else. That turn of events would make anyone pine for the charms of Bear Island, so, seeking a way to return to his ancestral home, Jorah went to work for Varys and the Baratheon regime, trading information on Dany and Viserys against the hope of a royal pardon. We first meet him, already working as a Baratheon agent, at the wedding of Dany and Khal Drogo, arranged by Illyrio Mopatis of Pentos. (More on Illyrio here.)

All of which brings to mind an oft-forgotten scene from Episode 5 of Season 1. Arya, following the recommended training regime of her fencing coach Syrio Forel, is chasing kitties through the tunnels and corridors under the Red Keep when she overhears a conversation between Master of Whisperers Varys and a man she doesn’t recognize but whom we know to be — dun dun dun — Illyrio Mopatis. Read that again. Illyrio Mopatis, fresh off brokering the marriage between Dany and Drogo, IS IN KING’S LANDING, talking with Varys (who ostensibly is trying to kill Dany) about current events in Westeros. Current events like: Ned finding out about Robert’s bastards; the coming struggle between the Starks and the Lannisters; the Lannister attempt on Bran Stark’s life; and the recent death of Jon Arryn and the possibility that the current Hand, Ned Stark, might meet the same fate. Both men agree that war is coming, but Illyrio thinks it’s coming too soon. “We’re not ready,” he says. Who isn’t ready and for what? 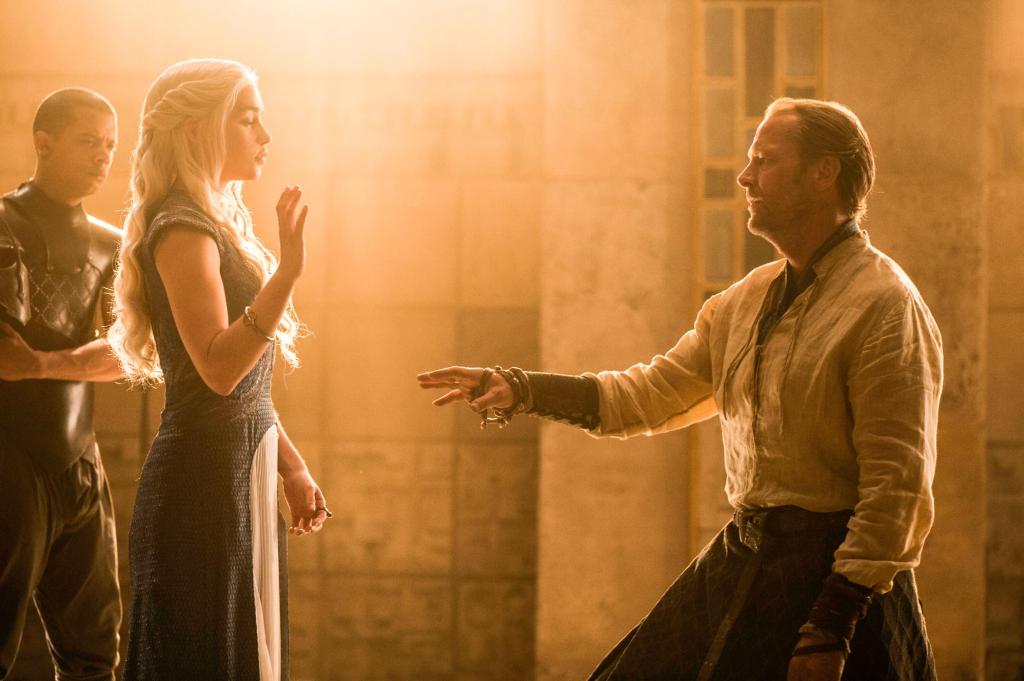 Evan asks, “Whose seal was on Mormont’s pardon when it was handed off to Ser Selmy? Varys?”

The seal is in the shape of a hand, so we can safely assume it came from Tywin Lannister. This bothered me, though: Being that there are, I assume, no notaries in Westeros or Essos, WHY NOT JUST DENY THAT SHIT, SER JORAH? DAMN. IT’S NOT LIKE YOUR SOCIAL SECURITY NUMBER AND PICTURE ARE ON IT. IT’S JUST WRITING; IT COULD BE ANYONE’S.

Liam asks, “Has it ever been confirmed that Benjen Stark is dead? I can’t remember him being mentioned since the first series.”

Nope. As some might remember, Ned’s brother Benjen, a ranger in the Night’s Watch, went north of the Wall on a scouting mission and never returned. In Book World, this is the subject of much speculation.

Daniel asks, “Can you explain a little more why just 105 men have to defend Castle Black? Are they stranded from the rest of their troops? Or is that really the entire freakin’ Night’s Watch?”

Those 105 are all the men at Castle Black because the garrison lost much of its strength when Lord Commander Mormont’s ranging party — numbering some 300 men, the largest ranging party in living memory — was cut to pieces on the Fist of the First Men by the forces of the White Walkers. So it’s actually much worse than it appears, because that 105 is mainly composed of Brothers who wouldn’t normally be hefting swords: cooks, stewards, blacksmiths. There are two other manned castles on the wall — Eastwatch and Shadow Tower — that could conceivably lend a hand, but there’s no guarantee they wouldn’t get hit as well. Eastwatch in particular is a valuable target as it’s the Night’s Watch’s only port.

Tell me about Moat Cailin, the castle Ramsay tasked Theon/Reek with convincing to surrender.

Moat Cailin is an ancient tumbledown fortress, built by the First Men, which guards the King’s Road on a swampy isthmus called the Neck that connects the North to southern Westeros. I’ve talked before about how the populations of the North and the regions beyond the Wall are primarily ethnically First Men, the first human inhabitants of Westeros, while the south is chiefy Andal. That’s because as the invading Andals gradually displaced the First Men from every region south of the Neck, their forays into the North were thrown back again and again by the old Kings of Winter and Moat Cailin. Surrounded on three sides by impassable bogs stretching to the coast, Moat Cailin can be advanced on only by a northbound army in a full-frontal assault straight up the King’s Road. Making the task more difficult, the three towers of Moat Cailin are arranged to provide what modern military parlance would call “interlocking fields of fire”: As an attacking army moves up the King’s Road in that aforementioned full-frontal assault, it has to pass between the three towers, and not one of the towers can be attacked without the attackers taking arrow fire from the other two. It is said that Moat Cailin, manned by a few hundred determined and skilled archers, can throw back an army of thousands. It has never once been taken by force from the south. As long as Moat Cailin is in the hands of the Ironborn, all the armies of the North (including Roose Bolton’s) that took part in the War of the Five Kings are trapped south of the Neck. Yet another reason Castle Black stands alone.

Thomas asks, “At the end of Season 3 wasn’t Stannis alerted to the problems north of the Wall and announce he was going to head up to help the Night’s Watch instead of his current quest for power? Did he just forget about that and decide to do a spot of banking instead?”

He was alerted to the Wildling host bearing down on the Wall; he just had no ships or army with which to do anything about it. Step 1  of doing something about it: Get money to pay an army. Step 2: Buy an army and ships for them to travel on. We can assume he’s doing the second thing right now.

Another Daniel asks, “My friends and I were discussing Stannis Baratheon’s scarred daughter last night. How did the injury happen?”

This is a good question that I’ve been getting a lot, but it’s best left unanswered for now.

William asks, “Do we know anything of interest about Bronn’s past prior to him meeting up with Tyrion?”

Jeremy asks, “I understand that the Mountain killed Oberyn’s sister and her children from orders (allegedly) handed down by Tywin Lannister, what still confuses me were the circumstances surrounding her murder. Why would Tywin want her and her children murdered? Was he just being a typical Lannister d-bag or was she or her children heir to a position of power?”

Tywin wanted them dead because those children, remember, were Crown Prince Rhaegar Targaryen’s. Power would have passed to them, and if allowed to live, they could have become potent symbols for Targaryen loyalists to rally around. Look at Daenerys: Once a street beggar turned teen bride, she now commands three dragons and an army several thousand strong. Well, she barely commands the dragons, but you get what I mean. Gregor Clegane’s murder of Elia Martell and her offspring was an abominable act. Yet it speaks to the dark, medieval quality of Game of Thrones’ world that the logic behind the killings was pretty sound. This is an awful place we’re talking about, where right and wrong are determined by the people holding the swords, and if you don’t think a victorious Daenerys would have advisers in her ear telling her to kill every last living Lannister, down to young Myrcella, you’re wrong.

Scene of the Week, or “Why Mace Tyrell Is an Idiot” 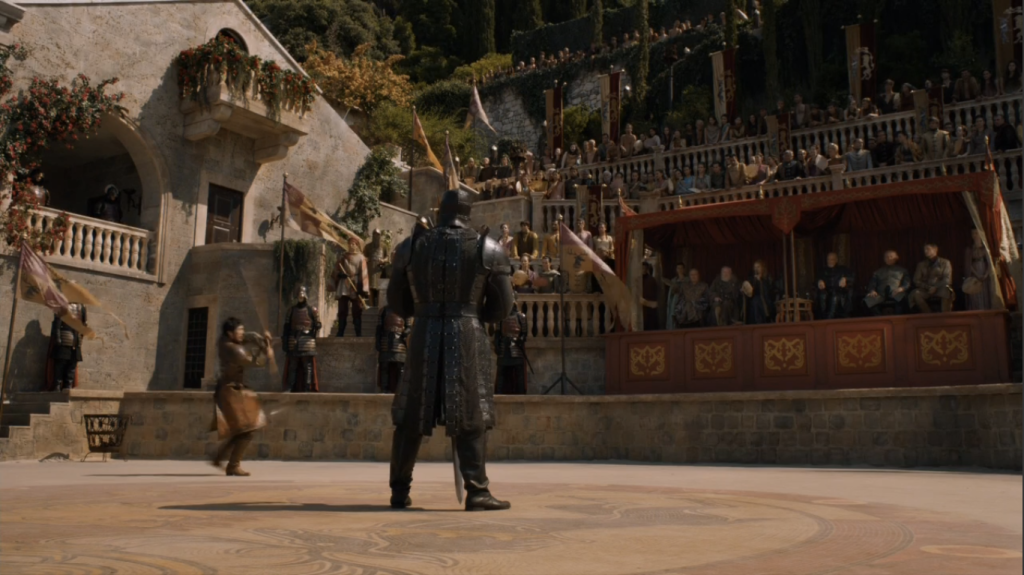 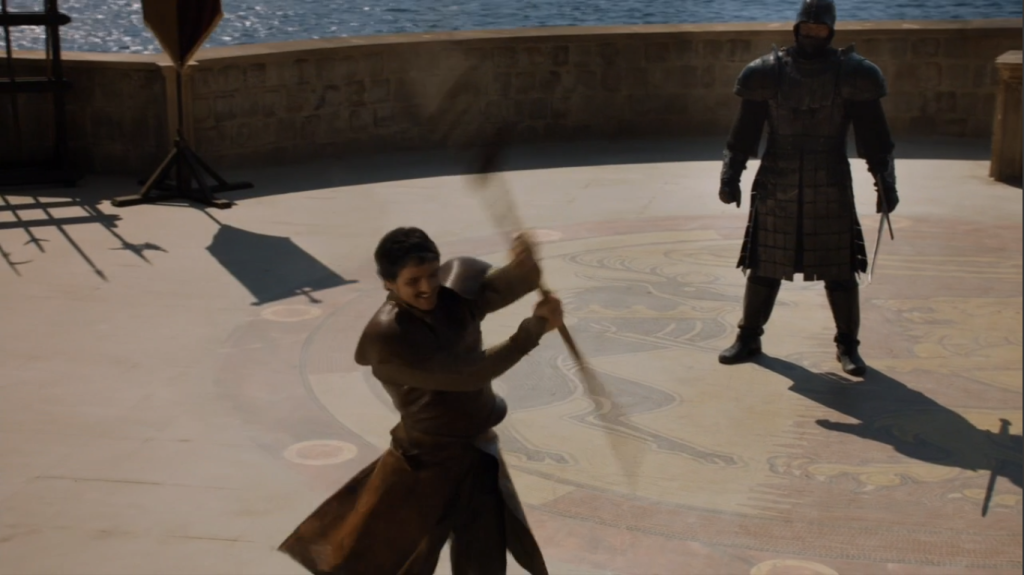 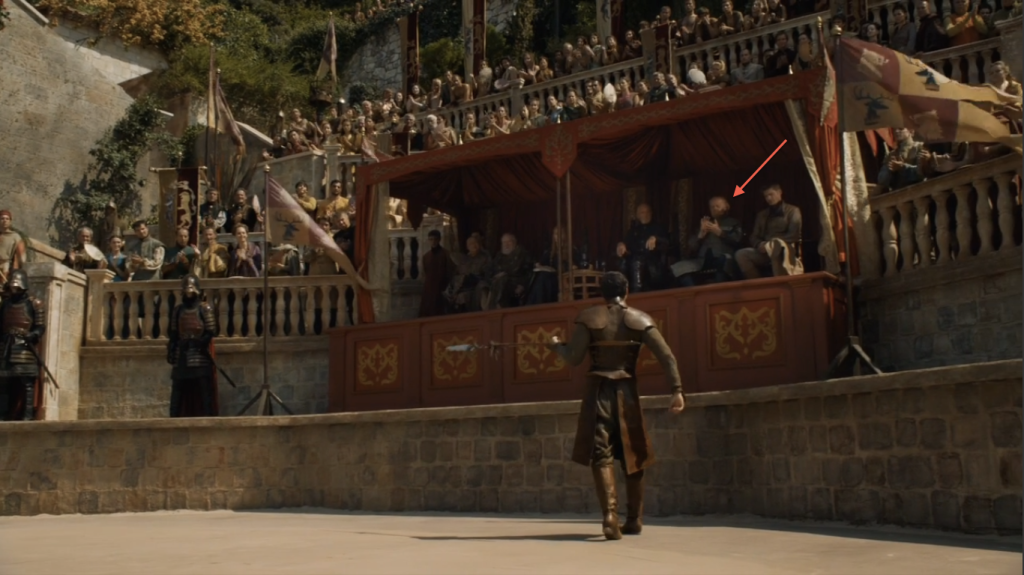 Why are you clapping, Mace?