Ask the Maester: May-December Romances, Escaping to Essos, and the Targaryen Clan

Stein asks, “Can you remind me why I should not be rooting for Sansa and Little Finger as a couple? Yes, Baelish is creepy, but not as creepy as Robin Arryn. Yes, he played a role in the Stark family’s demise, but he told Ned not to trust him. And yes, he’s much older, but c’mon, its the middle ages. Homeboy has helped Sansa out quite a bit.”

I’ll say this for Petyr Baelish: At least when he decides to send a ladyfriend through the Moon Door, he has the guts to do it in person rather than just passive-aggressively ignoring her ravens.

The reason you shouldn’t root for Petyr and Sansa — those crazy, star-crossed kids just trying to make their way through this topsy-turvy Westeros world — is really pretty simple. The reason Westeros is in upheaval in the first place is largely because of Littlefinger; about the only ball he didn’t set rolling down the long hill to chaos, war, mass murder, and economic devastation is the rise of the White Walkers. As Master of Coin, he funded the kingdom through massive loans of Lannister gold, accelerating the depletion of the Lannister mines, and setting the crown on the course to eventual collections by the Iron Bank, with Stannis Baratheon (the guy who in strict legal terms should actually be king) as its repo man. He engineered the murder of Jon Arryn via his lifelong manipulation of Lysa Arryn, paving the way for Ned Stark, King Robert’s childhood homeslice, to be offered the office of King’s Hand, the acceptance of which separated Ned from Winterfell and his fantastically-unprepared-for-life children at the worst possible time. Littlefinger played some kind of role in the shadowy attempt on a comatose, post-defenestration Bran’s life, identifying the assassin’s weapon as one he’d formerly owned before losing it to Tyrion Lannister in a bet, setting in motion the events that would lead to open conflict between the Starks and the Lannisters, which in turn spiraled into the War of the Five Kings. He fattened up Ned Stark’s self-important sense of honor and then sold him out like calf at market. He, with acquiescence and assistance from House Tyrell, had King Joffrey killed before Joffrey could even enjoy his wedding pie, which, OK, was totally awesome, but only serves to further destabilize an already shattered kingdom.

Harrenhal, awarded to Petyr by Lord Tywin for his behind-the-scenes role in brokering the Lannister-Tyrell alliance, is a nice get, as its attendant lands would surely provide a cushy income. But for the game Littlefinger is playing, a dragon-scorched fixer-upper in the Frey-controlled Riverlands just up the King’s Road from King’s Landing means his potential executioners won’t have to travel very far should his littlefingerprints be found on any of his schemes. And anyway, even if nothing is ever traced back to him, staying in a tumbledown (albeit gigantic) castle in the centrally located crossroads of the continent is basically a front-row seat to whatever war pops off next. Luckily — or, more likely, according to plan — his overly attached childhood ladyfriend happens to own an out-of-the-way castle with a well-earned reputation for being fucking impregnable. Cue the wedding bells.

Answers to your burning Game of Thrones questions.
So here we have Littlefinger, safely ensconced in the Eyrie, high in the Mountains of the Moon. He is now the sole legal guardian (Lord Protector) of the future Lord of the Vale, the disturbed young Robin Arryn. The armies of the Vale, at least in theory, are his to command until Robin comes of age. Which, you know, it’s a dangerous world and things happen to even the most stable of little lordlings all the time, even those who don’t have trapdoors in their living rooms. And, of course, Littlefinger has Sansa, whose children will be the heirs to the North. Does Littlefinger have feelings for Sansa, born out of the fondness he felt for her mother? [Gags.] Or does he merely lust after her and the power available to him through her? So: “helped Sansa out”? Nah, dude is an actual pimp; he helped her out to turn her out. 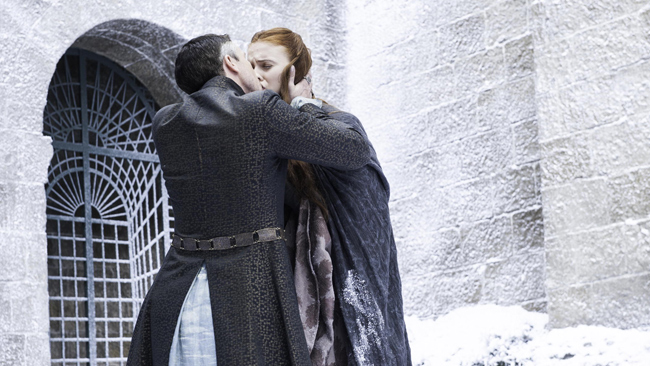 James asks, “Why would Littlefinger kill his wife, wouldn’t the entire Eryie come down on him? Or is he the lord of the Eyrie now?”

Littlefinger is, by virtue of his marriage to Lady Lysa, Lord Protector of the Vale. Essentially the caretaker lord until young Robin comes of age. I’m quite sure the various landed nobility and knights of the Vale would be pretty pissed if they found out that Littlefinger sent their late leal lord’s wife a-sailing out the Moon Door. Considering what we know of Littlefinger, though, I’m equally sure he has some sort of scheme to ensure the various citizens of the Vale never actually figure that out.

Westeros is a mess, but Braavos looks pretty nice. Why don’t people just move to Essos?

It’s not a bad question. But I’m not sure we’ve seen enough of the Free Cities of Essos to make a fair comparison, and besides, all we have to judge Braavos on is basically one of the Iron Bank’s conference rooms. One strike against Essos as a plush retirement spot is that the continent has been in a state of continuous war since the Doom of Valyria several centuries before current events. A large swath of land stretching inland from the southwestern coast of Essos known as “The Disputed Lands” has been fought over by various Free City belligerents for some 300 years, and is still being wrestled over in the current Thrones timeline. That state of constant warfare keeps Essos’s various sellsword companies, including Daario’s Second Sons, steadily employed. The shadowy and prohibitively expensive assassin’s guild known as “The Faceless Men” makes its home in Braavos, and an organization of face-changing killers doesn’t seem like the best choice of neighbors. That’s before we mention the continentwide slave trade; the possibly cursed ruins of Valyria, still emitting toxic and conceivably darkly magical smoke; the savage Dothraki hordes roaming the vast grasslands of the interior; and the pirates patrolling the coast.

Andrew asks, “I know Dany’s a Targaryen who escaped with her life after Robert’s Rebellion. But how is she related to the larger Targaryen clan? I know some of the Targaryen children were killed, how did she and her brother survive?” 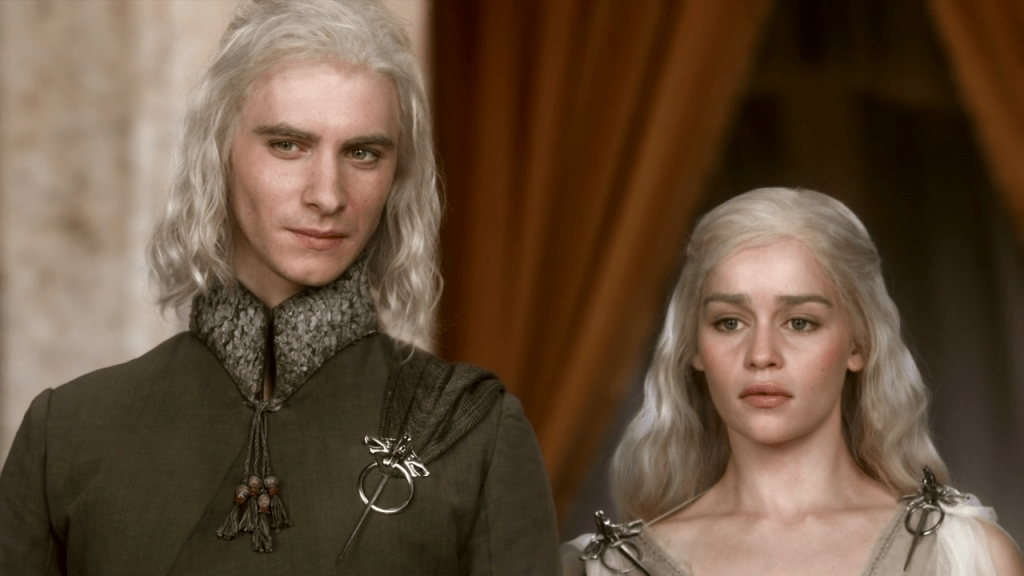 Daenerys and her late brother Viserys are the children of the Mad King Aerys II and his wife/sister Queen Rhaella, as well as the younger siblings of the slain Crown Prince Rhaegar Targaryen. Rhaella, pregnant with Dany, fled King’s Landing in the waning days of Robert’s Rebellion with Viserys and a clutch of loyalists including Ser Willem Darry, the former master-at-arms of the Red Keep. They sailed to Dragonstone, and it was there Rhaella died giving birth to Dany while a terrible storm, strong enough to tear stones from the towers of the castle, wrecked the anchored Targaryen fleet. Some months later, Ser Willem caught wind of a plan hatched by the garrison of Dragonstone to sell the infant Dany and young Viserys to the victorious forces of Robert Baratheon, who were just then preparing to sail on the island. Ser Willem, with the help of a few others whose names have been lost to history, broke into the nursery, stole the royal offspring, and fled to Braavos.

Ser Willem had access to money, it seems, managing to procure a house in Braavos complete with servants. Some of Dany’s earliest memories are of that house in Braavos, its red door, and the lemon tree outside her window. But Ser Willem was old and sick, and shortly thereafter, he died. The house servants stole nearly everything of value and turned the now rootless Targaryen children out into the world. Young Viserys, who would later have molten gold poured onto his head by Khal Drogo in Season 1, essentially saved their lives, moving them from Free City to Free City, one step ahead of Baratheon assassins. All the while, Viserys was trying to broker a deal with various seedy eastern potentates, merchants, and magisters — basically whoever would listen — that went something like this: Build us an army, help us retake the throne, and you will get your just reward. That pitch was enough to carry the interest of some wealthy patrons, eager to break bread with the very last of the legendary dragons. But only for a short while. As the Baratheon regime solidified its position, fewer and fewer people of distinction were willing to hear out these Targaryen curiosities, and Viserys and Dany became, essentially, street beggars. Somehow, the pair found their way to the Free City of Pentos, where they met the wealthy Illyrio Mopatis, which brings us to the beginning of Season 1, and the wedding of Dany to Khal Drogo, which was arranged by Illyrio.

Why is Mance’s Wildling army going to attack Castle Black? Isn’t the Wall hundreds of miles long and dotted with other castles that aren’t even manned? Why not attack there?

There are 19 Night’s Watch castles built in the shadow of the wall, running from coast to coast, but only three of them are manned. There is the Shadow Tower, to the west; Eastwatch by the Sea, the easternmost castle and the Night’s Watch seaport for supplies and trade; and Castle Black. As the Watch abandoned the castles over the centuries, the tunnels of those castles were sealed off. Mance’s host is vast — 100,000 by Jon’s count. That’s too many to climb the Wall, and digging their own tunnel would take too long. The Wildlings want Castle Black because they want the tunnel that runs through the Wall there.

Kendra asks, “So, Melisandre showed Stannis’s wife (I don’t remember her name) all of her fancy potions, one of which can be used to make black smoke. Does this mean that Smoke Baby isn’t real? I mean, we haven’t seen Li’l Smoky since its birth.”

Nope, Smoky Jr. was real enough. That scene with Queen Selyse just gave us some insight into Melisandre’s craft. It’s not all royal blood and smoke-baby assassins. Powerful blood magic like that takes a toll; you can’t just do it all the time. Those cheap magician’s potions and parlor trick powders are for maintaining Melisandre’s aura as a vessel for the Lord of Light in the eyes of those around her, without her having to, you know, give live birth to another Smoky. In fact, just which parts of Melisandre’s shtick are bullshit and which are legit visions from the Lord of Light is an open question, as far as I’m concerned. 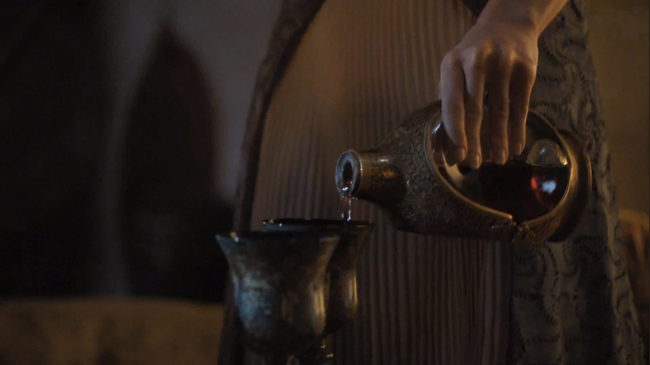 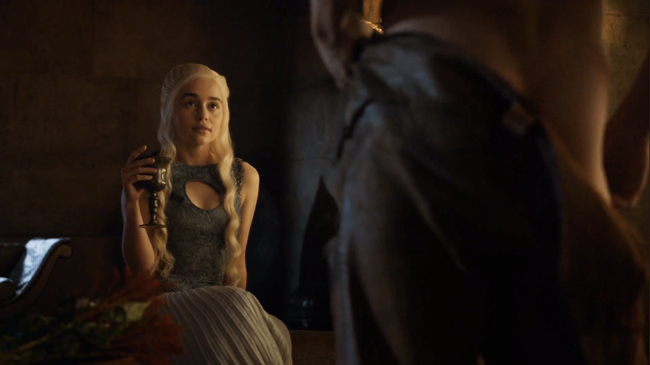 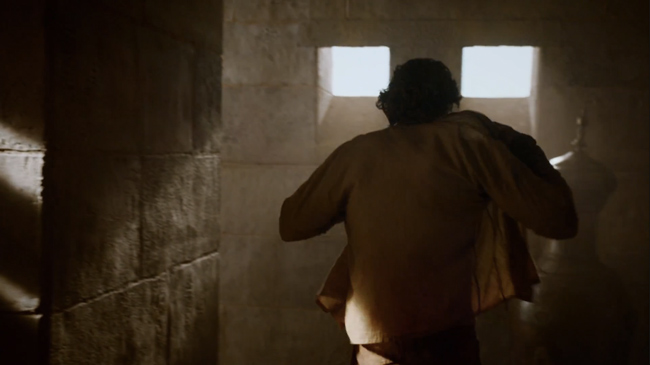 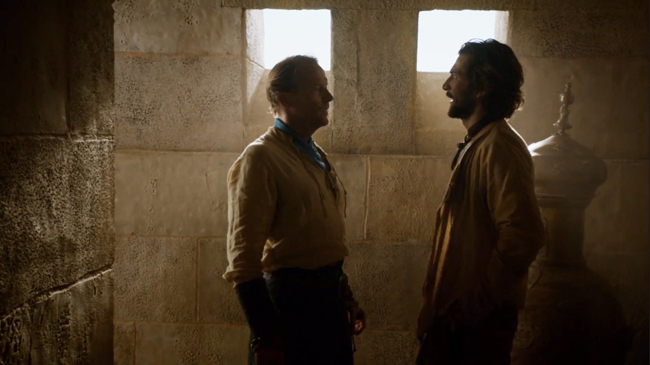 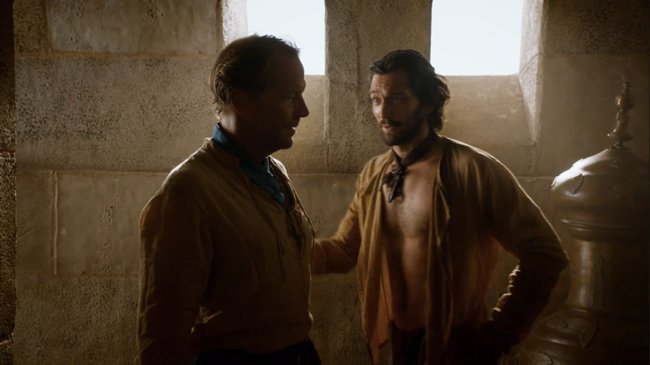 “The, uh, plans for that thing, you know, the Masters or whatever. We were just discussing those.”

“Yes, well, I have a drinking problem. Good day.” 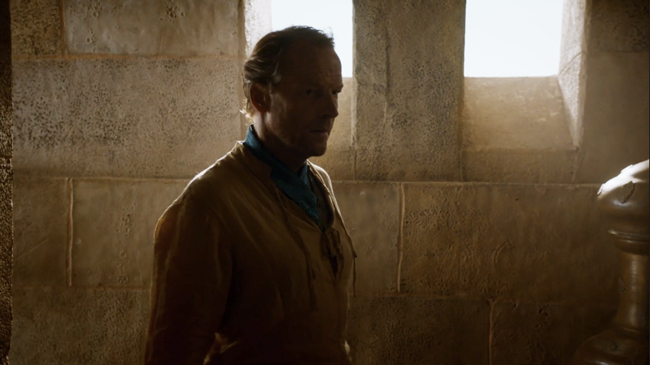 Filed Under: Game of Thrones, TV, ask the maester, HBO

Cannes Diary, Day 6: Somebody Wants to Win the Festival and It’s Not the Guy Who Made ‘Moneyball’

We Went There: Behind the Scenes at the 'Jeopardy!' Battle of the Decades Tournament Finals