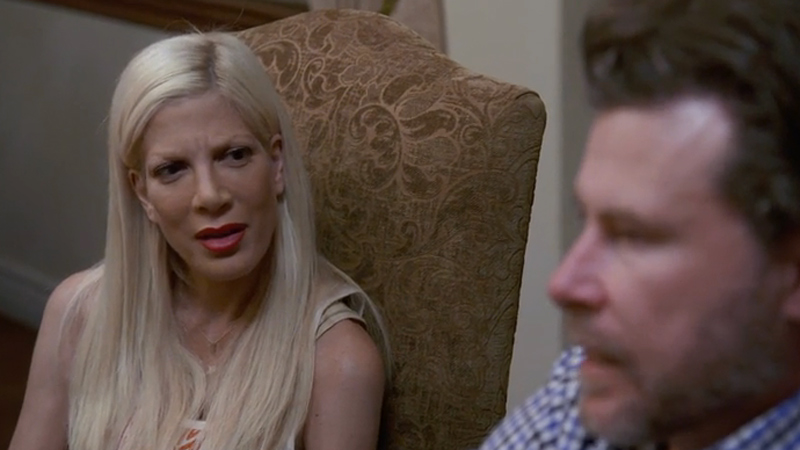 Who Is This Now? Tori.

Why Are We Watching Her? She’s wrangling with her husband, Dean, over his plans to leave the home (and country) for several months to host Chopped Canada.

How Did She Get Here? The reason Tori doesn’t want Dean to go is that when he hosted the last season, he was unfaithful to her.

What’s the Grossest Thing We See? Though Tori knows perfectly well that Dean will face serious financial consequences if he breaks his contract and refuses to return to host the show, she tells him she doesn’t want him to go. Dean says he doesn’t want to go at this juncture in their relationship, but that he has to, and that he wants her to understand because he doesn’t want to lose his family. “I can’t predict the future,” she shrugs. The next day, Dean tells Tori he’s not going to go, and she responds that he has to go, but I guess all she wanted was for him to say he wouldn’t even though they both knew the whole time that he didn’t actually have a choice?

What Have We Learned? Maybe one of the issues Tori can work on with her therapist while Dean is gone is emotional maturity.

Who Is This Now? Jerez Coleman, a.k.a. Kidd Cole.

Why Are We Watching Him? He’s being confronted about some scams he ran on a gullible young woman named Lucille.

How Did He Get Here? Somehow, he got the idea that if you’re trying to break into the music industry as a producer, it’s more important to front with lots of private security guards and luxury cars that you can’t pay for than it is to be good at producing music, so he’s grifted a bunch of trusting people into delivering services and then skipping out on the bills.

What’s the Grossest Thing We See? Kidd is a pretty terrible person who’s committed thousands of dollars’ worth of fraud, and that is definitely gross. But even worse is the moment when host/self-styled investigator Nev Schulman makes a point about Kidd’s many crimes by taking Kidd’s phone out of his hands and tossing it into the river they’re standing next to.

What Have We Learned? You can get pretty far in life with no money or credentials as long as you are loaded with confidence and B.S.

Who Is This Now? Constance.

Why Are We Watching Her? We’re checking in on the tidiness of her home.

How Did She Get Here? Several years ago, Hoarders paid for a crew of specialists to clean out her hoarded home; now it’s time for her to show whether she maintained the home in its post-cleanup state.

What’s the Grossest Thing We See? When Constance’s sister Darlene opens the freezer, she reveals a mass grave of frozen gnats. Professional organizer Standolyn says she’s never actually seen a freezer so filthy that it even could attract bugs, and presumably she’s seen some pretty horrendous stuff.

What Have We Learned? “I feel like I’m already dead,” Constance tells Standolyn, in front of the sister who’s remained in her life to help her and for whose assistance Constance is completely ungrateful — so maybe some people don’t deserve a crew of professional cleaners to try to set their lives in order. (Just kidding, we already knew that was true of at least half of these people, if not many, many more.)

Why Are We Watching Her? She’s having a hard time answering tough questions about her marriage at a press conference.

How Did She Get Here? Tanisha, a former star of The Bad Girls Club, has not exactly found happiness since marrying her husband, Clive (read: they fight a lot), so she and Clive have entered a live-in couples’ counseling boot camp.

What’s the Grossest Thing We See? At a surprise press conference to introduce the boot campers to the media, Tanisha is (mistakenly) described by one reporter as Clive’s “girlfriend,” at which Tanisha refuses to answer the question because of the factual error. When another journalist asks Clive about Tanisha’s infidelity, Tanisha turns on Clive, assuming he’s the source of the accusation. She storms out, shrieking profanity at Clive loud enough for everyone in the next room to hear.

What Have We Learned? Clive has a hearing impairment. And I think I might know what caused it.

‘24: Live Another Day’ Episode 6 Recap: Never Trust a Ben Bratt and a Smile