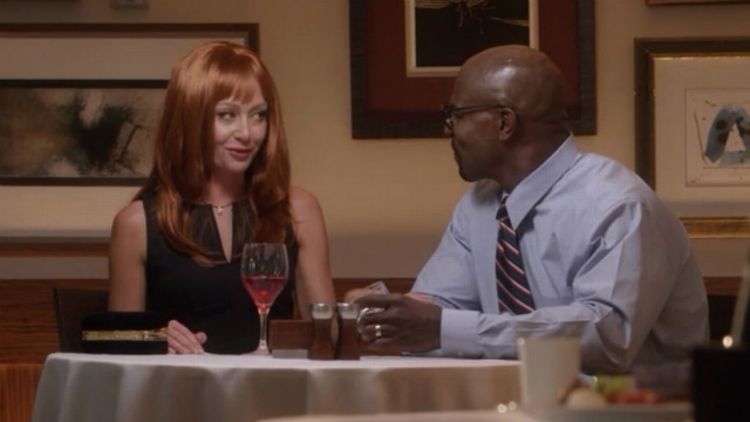 Of all the Bluth family members, Lindsay has the most fraught sense of self, the biggest questions about her role in the family. She grew up thinking she was Michael’s twin (twinness itself a complication of identity, multiplying it), and then discovered at the end of Season 3 that she was adopted. In “Red Hairing,” she approaches her literal identity crisis in a very literal manner: Changing her appearance, or, given the eerie manipulation her face seems to have undergone since 2007, it might be more accurate to say that she’s changing it even more. “Who am I?” she frets throughout the episode, trying on different looks and different relationships until, like all Bluths must, she returns to the sea … Cinco de Cuatro, to be specific.

The episode picks up almost exactly where the first Lindsay episode began: at an ostrich farm run by Marky Bark, freegan activist son of Lindsay’s one-time protest partner Johnny Bark. Lindsay and Marky met cute, as many couples do, dropping their original partners off at the methadone clinic. Now Lindsay has joined her face-blind, speedy lover at his desert ostrich farm and is experiencing a little sweat-and-squeeze herself. She’s so hot she’d “give $20,000 for a lemonade,” even as Marky’s mother presses her into grimy service as Marky puts pressure onto the neighboring businessmen’s retreat that’s rubbing up against their property lines.

Yes, Marky is the Ostrich God that warns George Sr. and Oscar that “the weak will become the strong,” a gambit to keep the corporate colony from taking over. Lindsay can’t take the heat or the drugged wildlife (“Who keeps numbing these desert animals?”). When Marky’s mom pipes up that Lucille has been “sent away,” Lindsay leads the unusual family unit (her, Marky, and their ostrich, Cindy) to the empty condo and revels in the barely recollected smell of home: “not-urine.”

She soothes Marky’s discomfort with the “apparently lavish” lifestyle by suggesting they aren’t living in the condo, they’re “occupying it.”

Flash-forward a year and we see the condo in the state that it’s in when Michael comes home from Phoenix and Tobias reconnoiters the place for things to steal to support himself and DeBrie: newspaper on the windows, stuffing torn out of the couches, but really, “the only thing they’d really changed was getting the not-urine smell out.” Despite the continuous need for the two to reintroduce themselves to each other, the relationship has gone just as stale. Lindsay is understandably excited to come home from scrounging food and find Marky at work on a “love bomb.” (“Let me just change out of these filthy clothes and into some filthy lingerie.”) But Marky has a bigger, longer-lasting plan in mind: He wants to glitter-bomb Herbert Love.

He’ll leap out of the lectern, he explains, and then Love and the audience will — Lindsay interrupts: “be blue in the face.” Considers Mark: “That’s better than mine, actually. I was going to say they’ll be covered in ink and glitter.”

Lindsay rolls her eyes at the plan, her impatience with their lifestyle having already reared its feathered head in Lindsay’s furtive visits with Lucille Two across the hall. (Making Lucille three-for-three for Bluth sibling secret trysts.) Lucille Two is delighted in the company of Lucille Bluth’s daughter; it’s another notch in her ongoing battle for Lucille supremacy. She gifts Lindsay with sequined clothes and a darling red wig, previously used for nautical cosplay. (Lucille Two: “I used to wear that with the Captain, and I was …” Lindsay: “Tennille?” Lucille Two: “And not make eye contact, yes!”)

Lindsay is happy with the arrangement as well: “You’ve been like a mother to me, except kind and loving and willing to let me eat.” She has even made Lucille a banner. (Look at banner, Lucille!) Lindsay wants to support Lucille Two’s run “4 Congres,” drawing on her experience campaigning for student government against long-time nemesis Sally Sitwell, daughter of Bluth family rival Stan Sitwell.

She and Marky argue about the passion having gone out of their relationship (“It doesn’t matter, but I’m really, really pretty!” “I’m the straightest guy you know!” “Why does every man have to say that to me?”), Marky storms out, and Lindsay discovers a check wedged in the pages of Venus magazine. It’s for $50,000 and the memo indicates its intended recipient: “Gangie 4: Facelift.” Using what could be called “banner logic,” Lindsay interprets this to mean that the money is Lucille Bluth’s gift to Maeby to pay for plastic surgery. Lindsay goes to the soft-time prison where her mother is serving time and tennis balls.

They argue, as usual. Lindsay defends Maeby’s beauty but her emotional plea falls on two sets of dry eyes: “I’ll be out on parole by the time you work up a tear,” observes Lucille.

Lindsay rebelliously steals a jar of glitter and returns to the condo, ready to help Marky with his Love-bomb scheme by attending the candidate’s fund-raiser incognito. She even offers to sign over the check for 50 grand, “It could buy a lot of leaflets … and Nature’s Miracle.” Marky insists Lindsay tear up the check.

Having donned the red wig (it’s a better disguise than the original two-part horse costume), Lindsay runs into both her father, who asks for money, and her daughter, who asks what she’s doing there. Lindsay’s honest answer — “A random act of senseless non-violence” — provokes a like response from Maeby: She’s there to pick up a lifetime achievement award for her work in the entertainment business. Lindsay sighs, “Tell your therapist I tried.”

While dumping some vodka in her purse, Lindsay is chatted up by Love, who she doesn’t recognize (face-blind Marky just showed her a picture of Nat King Cole): “The only phony I’m interested in is your phony number.” She’s too distracted to let Marky out of the lectern and thus when the glitter bomb explodes, he just blues himself. A déjà vu–despondent Lindsay brightens when Herbert Love presents his card and suggests “sexual congress.”

Maeby lets her know who she’s been schmoozing, which both further depresses and excites her. For a couple of days, Lindsay drinks her purse vodka and nurses her wounds, visiting Marky in prison (“They’re dropping my charges from prank bomb to ‘not Arab terrorism.'”) and eventually attempting to reconcile with Maeby.

Maeby floats the idea that Lindsay could use her feminine wiles to get Love to let Marky out of jail. Lindsay jumps at the idea, eager to do right by Marky, but also intrigued by being with, as Maeby puts it, “one of those shallow guys only interested in looks.” Sighs Lindsay, “I’ve missed that.”

Lindsay and Love meet at the Ealing Club (where everyone does!). He uses clever wordplay (“Your cheekbones are higher than my approval rating”) to ease her into a hotel room. On the way she runs into Michael and becomes ensnared in the favor-chain begun when Michael asked his father for movie rights. At this point, Michael wants Lindsay to talk to turn Love “against the wall.” She agrees to, if Michael will talk to Warden Gentles about letting Marky out. He figures why not — “I have a script notes call with him on Tuesday” — only to then forge another link in the exchange: Will Lindsay sign over her movie rights as well? She agrees.

A brief detour into Michael-land comes next, with Michael and George Michael both encountering probably fake traffic jams that keep them from having to meet at the Ealing Club, where Michael can’t get in, anyway.

Lindsay successfully gets Love against the wall, in every way you can imagine. He takes it slow, wanting to get his six hours’ worth. (You can see where this is going, trick-wise, no?) He also gives her a “diamond” heart from “Tiffani’s,” leading Lindsay to believe that he might be the Love promised her by the Four Seasons Mumbai shaman. They’re so in sync, she says, “It’s like we finish each other’s …” Continues Love: “sandwiches.”

Love hires Lindsay as his (room) key adviser. Neither of them can overtly spend money on each other, so Lindsay pays for dinner the way she always has — putting it on her parents’ card at the Balboa Country Club. But, as the narrator points out, she was “not the only Bluth pretending to be something they weren’t that night”; Michael is there with Rebel Alley, playing the big shot.

An evening of awkward sibling embraces ensues, as the two passive-aggressively try to figure out how to keep their polar-opposite dates from engaging aggressive-aggressively. It comes out that Love is still for the wall, and that Rebel Alley gets a little snarky when she’s two glasses of wine to the wind. (Says Love, “I guess the special tonight is ‘red snapper.'” Though later he declares allegiance to another form of sea life: “Is there anything better than the great American scallop?”)

Lindsay hears Rebel spouting the kind of beliefs that she has herself and becomes torn “between who she was with and who she wanted to be.” Love decides to leave the love he’s with and loudly announces a return to his wife.

Prowling the boardwalk later, “Lindsay was trying to figure out who she was when she ran into a man who couldn’t tell, either.” Marky! Did Warden Gentles get him out of the slammer? No, Marky “got out my way,” not from jail, but a Dumpster. “You won’t believe the scallops they’re throwing away here.”

Marky tells Lindsay that he has another bomb planned, “a real one,” with Love’s yacht his intended target. Says Marky, “On Cinco de Quatro, Love’s boat is going to …” Lindsay adds “sink-o?” right as Marky finishes lamely, “go into the water.” (No wonder she was turned on by Love’s superior wordplay.)

Faced with the choice between a high-powered politician and an idealistic ostrich farmer, Lindsay chooses to follow her chipped, diamanté heart and tries to rat out Marky. Love will have none of her loyalty. His wife has found out about the affair, though he’s done spin control: “I told her you’re just a prostitute.” Lindsay protests that she’s not, but when he gives her a “severance package for servicing my package,” she literally cannot bring herself to throw it away.

This whole last bit is pretty fast-moving and flip-floppy, with Lindsay undergoing at least four changes of heart in seven minutes. She tries to be loyal but is given proof that she behaves like a prostitute (“These were taken in an Albertsons parking lot”). She contemplates returning to Marky and his awful mother, she runs into her awful mother, she defects to her faux-mother (Lucille Two), she decides to stick to her liberal (and blonde) roots, she gets riled up and betrays them in exchange for a crowd’s affirmation. In the end, her changability is the constant, her willingness to slap on any superficial label to soothe her ego is her core. As the narrator closes, “That’s when Lindsay found out who she really was: a Bluth, just like her mother.”

A coda: Lindsay becomes something of a conservative folk hero, “a game changer,” who agrees to run for office when Love slips into a coma, possibly due to “blowback.” Her hair is all different again.

Past season jokes (please add the ones you spy in the comments):

Jokes from this season: