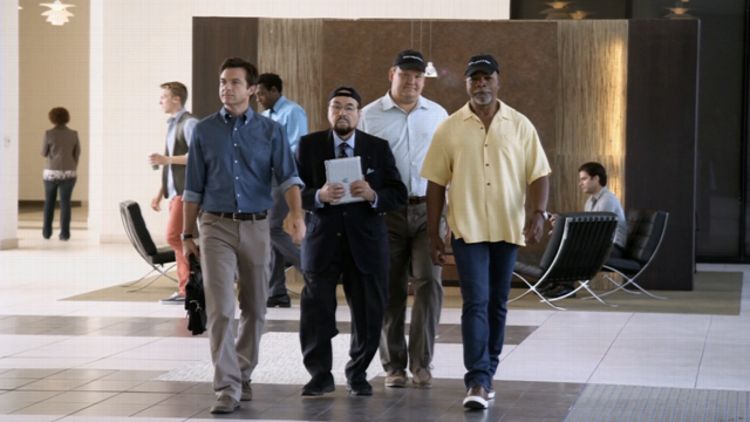 “The B. Team” is easily the most self-aware and meta episode thus far, which, four episodes in, doesn’t sound like much. But consider how far inside its own navel Arrested Development travels on a regular basis: This episode’s mixture of nods and winks is almost distracting, a form of postmodern Tourette’s so severe I can’t even imagine what a non-fan might make of it. I take notes on the callbacks, call-forwards, and other references while I’m watching, and at this point I think it might be easier to keep track of the jokes anyone would get.

Yet I think this might be the best episode so far, too, but mainly because of the stuff that was easy to follow, not the intertextual filigree you need Google — or, um, “G—–” to get. First of all, it’s a Michael episode, and he seems to have returned to the basic competence I complained about missing in the previous episodes. Even more helpfully, the story arc sticks mostly to one period in the Bluth family saga; there’s none of the timeline hopscotching that marked the first Michael chapter. Whether or not any of these narrative aides would make the episode more comprehensible to an average viewer, I don’t know. Maybe they can fix it in post.

In any case, the plethora of inside jokes and self-references might have been unavoidable, as inevitable as a stair-car hitting a banner: This episode has to do with Hollywood, or, as they say on the show, “Get this — Beverly Hills.”

Understandably dissatisfied with his job driving around a 360-degree-camera “ostrich car” for the not-actually-named Google, Michael happily answers a request to meet with IRL series producer Ron Howard at his Imagine Entertainment office. He wades through a sea of Opie auditioners (for the Andy Griffith movie — yes, they’re “finally making that movie”) only to discover that most of Howard’s projects “are based on still photos I find inspiring.” He confides, “Willow was based on a Soft ‘n’ Snuggly coupon I got in the mail.” (Which of course explains a lot.)

You thought Howard simply appearing in the series was cute. No: This is where we start to enter the wormhole. Howard has used still photos as inspiration for a movie. Specifically, in 2011, he partnered with Canon for a photo contest in which “the final goal is to use the eight winning entries as creative coordinates of a short film that connects the seemingly random images within a unified story.”

So there’s the Canon reference, which is just part of an entire background thread in the episode about Howard’s willingness to commercialize his work. And then there’s the next-level thing: seemingly random images connected to become a unified story … Hmm … ostrich much? Prayer hands? Stair car? Do I need to draw you a picture of a chicken or are you getting the parallel here?

Just the use of Howard to start the ball rolling is indicative of how the episode’s jokes, and to some extent its plot, knowingly circle back on themselves.

Howard’s inspiration at this point stems from the “begging photo” of Michael that accompanied the Altitude magazine profile we first found out about in Episode 1. He’s interested in both telling the story of a family undone by the real estate market crash (an interest “ever since Brian Grazer got tipped off three months before it happened”) — especially if the mom was dying. Never mind that Michael’s wife passed away two years prior to the events of the original series: “I think it’ll be a lot more fun if we see her die.”

Michael awkwardly agrees — “A lot more fun” — only to be made even more uncomfortable by Howard’s suggestion of whom to cast: “My girl,” Rebel Alley. Michael assumes that Rebel is Howard’s mistress but is briefly distracted from that ethical dilemma when Howard explains to him that the movie should include his entire family. “Them?”

Thus Michael is faced with a task familiar from the whole series’ run: Getting all the Bluths together to do anything. At this point, all he needs are their signatures on releases to tell their life stories. He knows he’ll have a hard time getting the OK from a recalcitrant and vindictive George Bluth; family lawyer Barry Zuckerkorn confirms that it’s hard to get the elder Bluth to sign anything. It’s almost as if, he muses, someone once told him — segue to young Zuckerkorn and his dad advising young Lucille and young George — “What if you never signed anything because you said you don’t have a signature … just like you, Pop. He’s never given me one card. All his gifts are money orders.” Barry’s father fidgets uncomfortably, and this little vignette parallels what Howard and true Arrested fans already know about the Bluth family story: “The real heartbeat of this thing is the father-son thing.”

Outside the Imagine offices, Michael has “one of those ridiculous meet-cute clichés” with an actress (Isla Fisher) returning from an audition involving “one of those ridiculous meet-cute clichés.” She has red hair, much like Michael’s deceased wife! And Michael is a producer for Imagine Entertainment! He has the business card to prove it, though not the health benefits. But they never get each other’s names.

Redhead invites Michael to see her Scottish music band play, and Michael determines to become “a real movie producer” and go after the signatures of his family members. Espying a man who looks like George Bluth (but, come on, that’s got to be Oscar) romancing Lucille Two, Michael makes his pitch: The movie will put his dad in the best possible light: “Everyone needs to see who the real George Sr. is … very, very nice.” To which George/Oscar replies, “Go to hell.”

Stymied in that direction, Michael continues to pursue the redhead. Kitty Sanchez (now working for Maeby at Imagine) thinks he’s just using the movie as an excuse to bed the redhead (which is kinda the case), and scolds him, “This is not the hot tub at Bruckheimer Tower.”

From his tiny office at Imagine, surrounded by Howard detritus (More Angels and Demons lobby stand, off-brand Grinches), Michael engages Carl Weathers, who pulled off his own rights-free version of the Bluth story, as part of his strategy to “build it first”: Get the basics of the movie together and then get the rights. He and Weathers bring in the world’s only prison warden/Writers Guild member, Stephen Gentles, to write the script, and Andy Richter, who once “came to a chicken and ham-water dinner” the Bluths had, to play Michael. (I think?)

Howard and Grazer (waltzing in for a half-cameo himself) are unimpressed by the assembled B-list team. Howard “really does insist on controlling the casting” himself.

Michael winds up fishing for rights in the Orange County offices of Imagine, fending off those who confuse it with Orange County Imaging (which will be much better with the patient samples). George Bluth (Oscar?) makes a surprise visit, and Michael explains that he needed his signature not just to make a movie but also to prove that he’s a big shot. That changes the elder Bluth’s mind: “I didn’t know it was about lying to a girl!”

Michael heads out to see Redhead’s Scottish music band, running into Howard outside the club. Michael relays that he’s acquired his father’s (?) signature, and now is ready to make the movie: “Who’s not going to relate to a son standing up to a self-centered father?” Howard points out that in his vision for the movie, Michael is the father. But, Michael says, “that would make my son the son …” He does see Redhead at the club, and after some horrible music they chat themselves into a photo booth for some sexytime. It goes exceedingly well — Michael really does “have a part for her” — but he is still groping for her name, in addition to other things. She leaves before saying it, but the souvenir photos give it away: She’s Rebel.

Michael thinks he’s messed around with Howard’s mistress, but, as the narrator Howard points out, “Actually, that’s his daughter … but that’s kind of worse, don’t you think?”

The season’s inscrutableness has actually made me appreciate its throwaway gags even more, and a variety of them leavened this episode’s dense hermeneutics. You don’t need to be an Arrested devotee to get the constant background jokes about Howard’s more craven career moves (a script for a Backgammon movie, Angeles y Diablos: Mas, Mas, Mas!), and compared to the “MethadOne” mix-up, the confusion between the Orange County Imagine office and the Orange County Imaging clinic was unforced and breezy, even given the parallel health care/entertainment industry misunderstanding. (“Brain embolism? I’m here to pitch a game show.”)

That said, the layering on of questions about identity is rich enough for a semiotics grad student feast. There’s the appearance of Howard and Grazer as versions of themselves, the doubling of George and Oscar, the Richter quintuplets, “twins club,” a constant theme of personal privacy — the Google Maps car and George Michael’s boundaries and software. And then there’s the near-constant thrum of references to the way the show’s makers had to work around not having all the actors together at once (they’re almost as difficult to herd as the Bluths themselves): obviously overdubbed scenes including the back of a character’s head, clunky devices to obscure faces … even in the snapshots from Michael’s hot photo session, the features of the actors are impossibly blurred. Mix in “face blindness” and now I’ll be searching for DeLillo in the credits.

Callbacks I saw (add yours in the comments):

Call-forwards (is that what they’re calling them? Offer your suggestions in the comments!):

Meta shit not mentioned above and undoubtedly incomplete: