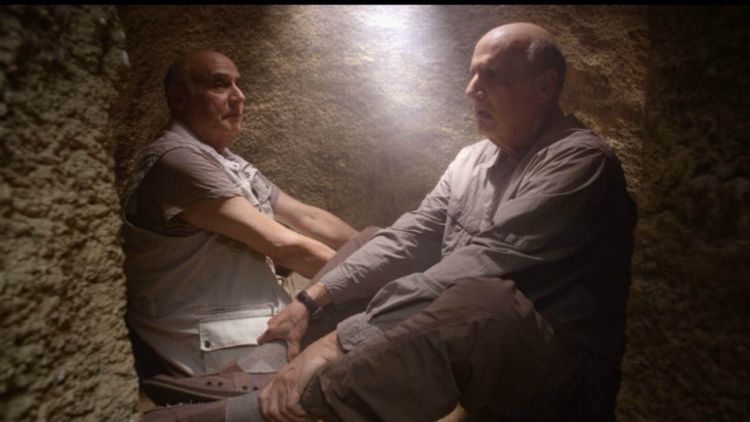 And so now it’s George Bluth’s story, or, rather: “And now the story of a family whose future was abruptly canceled and the one father who had no choice but to keep himself together. It’s George Sr.’s Arrested Development.”

George faces a particularly tough assignment in keeping himself together because, of course, there are two of him, and the main challenge of the episode is how to capitalize on his twin brother Oscar for use as an alibi/decoy/dupe.

We open with George leading a pseudo-spiritual sweat lodge ceremony for desperate corporate executives, a riff on his time huckstering Kabbalah-ish nonsense from prison via “Caged Wisdom” tapes and DVDs. After hours in the heat, he used to let the lemonade rule him! Now, having achieved enlightenment, he’s willing to share the answers with businessmen thirsty for his secrets: “Come on, Daniels, you ran Bear Stearns, for God’s sake!”

George didn’t wander into the desert looking for enlightenment, of course. And the first of the flashbacks begins. George came to the desert as part of a scheme to profit off the border fence he believes Bluth rival Stan Sitwell to be bidding on. In the flashback, Sitwell admits he has a government contract that will make him bigger than “Well, maybe not Halliburton, but definitely Halliburton Teen” (an outfit that sells some familiar-looking jorts).

George wrestles away what he thinks are the blueprints for the construction project. Stan tells him, “It’s not what it looks like,” so obviously George assumes it’s exactly what it looks like: a monument honoring George W. Bush, designed to be 20 feet wide and extending five miles into the sky. He shows the cell phone image he snapped of the plans to Lucille, who explains that the “W.” stands for “wall” and, George realizes, “the ‘bush’ stands for bush.” And, “This explains the immigration booth 10,000 feet in the air.”

Lucille is upset that the government border fence rips off her proposal “to keep out the immigrants, which was my idea!”

Disheartened by Lucille’s scolding, George rekindles his relationship with Oscar, who is living the spiritual life in the no-man’s land between Mexico and the U.S. George sees a chance to gouge the government after all and buys the land, as well as starts up the corporate retreat.

(All this happens after winning Lucille’s approval for the idea, which they celebrate with an attempt at sex: “Sorry I gave you the old noodle-stab there.” They also decide to pretend to separate, so as to throw now-majority owner Lucille “Two” Austero off their collaboration.)

The tough-love corporate retreat is a “first-class experience” devoted to teaching the “sweat-and-squeeze,” and the narrative finally catches up with the opening. We learn the secret behind George’s capitalist consciousness-raising: He extorts dehydrated executives for $15,000 in exchange for teaching them how to “get something for yourself by taking from someone who thinks it’s his,” plus all the lemonade they can drink — a scam abetted by subbing himself in for an equally dehydrated Oscar after they all leave the sweat lodge.

A school-play-level-fake Ostrich God calls out George’s duplicity and dispenses a warning — “You must leave this land or the land will change you” — but all George can think is to ask him for tickets to his reservation’s Ray Romano show, “And get us close to the front, but not so close that Ray talks to us.”

Flash forward a year (again, the chronology is so complicated I’m not sure it’s worth keeping track the first time through): George is not even trying to extort anymore (charging a measly two grand for lemonade) and Barry Zuckerkorn explains that he owes a balloon payment on the land for $15 million. Zuckerkorn suggests that George try to get congressional candidate Herbert Love (who is running against Lucille Two) to push for the long-delayed wall/George W. Bush monument.

George sends Oscar off to romance Lucille while he goes on his political errand — a switch that backfires when Oscar learns that George’s enthusiasm for the retreat did not spring from a concern for family but out of the real Bluth-most-important-thing, greed.

A friend pointed out to me that some of the jokes that I had suspected to be call-forwards are actually at the very least references to older jokes: When Michael romanced government prosecutor Maggie Lizer, he masquerades as “Chareth Cutestory,” a maritime lawyer … which just seems overly twee on a number of points now, a sign of both Michael and the series trying too hard.

I enjoyed this episode even less than the first. I laughed, but generally more at the quasi-original developments than at the twists on overly familiar tropes. (Heartfire trying to silently order a drink in a bar, Halliburton Teen.) I look forward to the payoffs from Slattery’s genially disgraced anesthesiologist (“If only we could use some of [an armadillo’s] medicine for our own pain. Oh wait, I’ve got a full syringe in the car”) and the maca tree’s fertilizer treatment more than I do most anything else. The wit so far seems less ridiculous and funny-for-funny’s-sake than it used to be, when the gags were abundant and less freighted. So far, Arrested is like the Bluth family: self-involved — and even, yes, greedy.

Callbacks (an inevitably incomplete list; please amend in the comments):

Potential call-forwards (or callbacks I have missed!):

As the Coast Guard jail scene opens, the narrator explains, “The family met up at the beginning of a fourth season that would never come.”