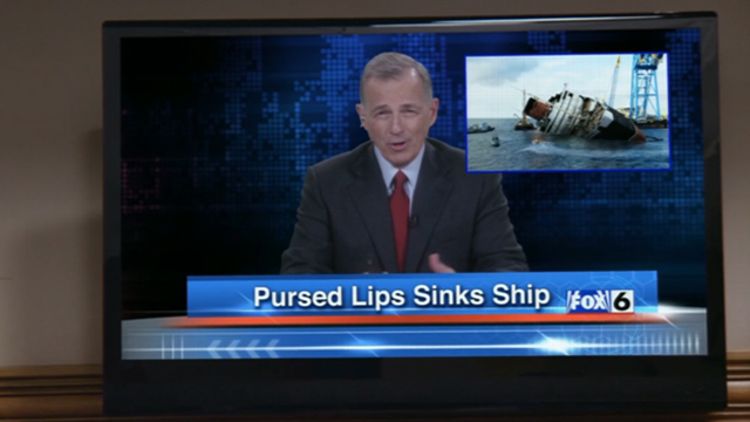 This is the first Lucille episode, but I feel like she’s been Season 4’s most visible Bluth family member. It’s her beaching of the Queen Mary that launches a plethora of plots, and it’s her machinations that animate the herky-jerky attitudes of the Bluth family toward the border wall — and, for that matter, toward each other. She is very much the Queen B, and right up until the end of the episode, she seems in full command of her colony and of herself. The rest of the family may be in near-constant states of identity crisis, but Lucille is quite comfortable with who she is. In this episode, the only time she pretends to be what she’s not is when she puts on her “drunk act” to get into rehab and, well, that’s not much of an act.

The lack of pretense makes her the most consistent and least interesting Bluth. Buster may seem one-note, but he’s actually pretty conflicted, even complicated. His love interests have included Lucille Two, Lupe, and a Roomba — how’s that for range? No, Lucille is the most one-dimensional Bluth; it’s not really that surprising that Jessica Walters does an almost note-for-note version of Lucille as the mother/mastermind on the animated series Archer. What’s weird is that when the show offers Lucille a way out of her martini-swirling villainy, it’s not to become more complex, but to consider becoming invisible. This might be a commentary on the paucity of roles available to actresses over 60.

We open with a brief introduction to The Real Asian Prison Housewives of the Orange County White Collar Prison System and its central clique, the Jade Dragon Triad. It does not take long to realize that Lucille has made some powerful enemies on the inside. Warns a Dragon: “She’s going to end up on the wrong end of a noodle.”

But how did we wind up at this carbo-load? Netflix rewind to the end of Season 3, when Lucille commandeers the Queen Mary to escape the feds. She gets a call from Lucille Two, who is giddily following the chaos from her condo. They begin to throw shade. “I’m practically counting your crows’ feet,” hoots Two. Vengeance wins out and Lucille turns the boat around, turning it over in the process. As the local Fox station chyron has it: “Pursed Lips Sink Ship.”

Cut to the Coast Guard jail, where Barry Zuckerkorn has good news! For him, at least: It’ll cost a fortune in legal fees. And she’s going away for a long time — unless she can find an alibi. Lucille catches Buster’s eye and attempts to goad him into a cover story: “Tell them how you were drowning and I commandeered the ship to save you. Tell them the truth.” BIG WINK. Buster does his best, announcing: “She stole the Queen Mary to get away from the SEC. Oh, and she winked … correction — it’s a glare.”

Still, Buster is nothing if not malleable and the plan for him to testify as her star witness takes a hideous shape: He has to live with her, alone, since she and George are fake-separating in order to distract from their wall-doings. As the trial draws near, they get on each other’s nerves, neither feeling like the other is holding up their end of the bargain. Of course, it’s not much of a bargain, since Lucille never promised Buster anything in return for being her alibi. Buster finally realizes this and demands “stimmie” money “so I can get a hook” that will do that thing where you rub your fingers together to simulate fingering money. Besides, the current hook puts holes in the toast.

Lucille’s recalcitrance alienates Buster to the point of his boycotting her maritime court trial. (I think the absence of all Bluth family members has been accounted for at this point.) The only person even close to family there is Lucille Two. As Zuckerkorn connects the dots (like, for real, dots on a piece of paper), Lucille tries to wring some sympathetic testimony from Austero, but instead the two wind up playing a very old-lady version of “the dozens”: Lucille Two mocks Lucille’s “Keystone Kops” family. Well, says Lucille Bluth, “Your references are as old as the wallpaper in the room of that pretend child you’ve had all these years.”

The jury finds her guilty and sentences her to three to five years at one of those “country club prisons that had become popular after the Enron debacle.” We’ve seen glimpses of this soft-time facility but now get some details: You can pick a scent for your delousing spray, and dial 7 if you’re sexually assaulted by a guard — “If you go through the front desk, it’ll take forever.” Oh, and don’t forget to tip the towel girl; she also does the cavity searches.

George Sr. comes to visit and there is good news: No one has come after Lucille on the financial shenanigans, just the boat stuff. So, he explains, if she agrees to go to Austerity, they’ll actually shorten her sentence. Lucille rejects the idea: “I’m not going to fake having some sort of alcohol problem.” “Really,” George mumbles, “I figured … ”

Plan B! China Garden (not the one by the harbor, the assistant at the sweat lodge) has an aunt doing time, Olive. She will hook Lucille up with the Jade Dragon Triad and maybe prison life will get a little lusher. It does, in fact, get richer: Lucille uses her knowledge of local smoking ordinances to seal alliances with the Triad and quickly convinces China’s aunt to invest her husband’s money in the border wall. That’s right, she tells George, “I got Olive Garden to give us unlimited bread.”

When the U.S. government backs away from the plan to build the wall, and it turns out that the Bluths don’t even own the “right property,” Lucille falls into bad odor with the Jade Dragon Triad. Fearful of getting a sharpened noodle in the wrong place, at the wrong time, Lucille tells George to get Love to oppose the wall — but they will need to build enough of it to trigger the government to pay off the Bluth company (and the Jade Dragon Triad). It all seems a little “treason-adjacent” to George, but Lucille says the only thing they have to worry about is Michael. He has walked away from the company, but to really make sure he and his conscience don’t interfere, George should get him to sign away his rights.

And that is how the “You’d do that for me?” exchange between Michael and George becomes “the now four-favor family pact.”

Alerted to the precariousness of her position by how the Jade Dragon Triad is already divvying up her stuff — and frustrated by George’s inept “Steamboat Willie–ing” of fake wall footage, Lucille calls Gob, demanding he get to work on the wall. He’s busy working for Michael. Frustrated again, she moans, “Is there anyone there with half a brain who can help me with this?” Gob has a suggestion: “I don’t know about half a brain, but Tobias is living with me right now and he’s not very bright.”

He also tells her that Tobias is at Austerity, so Lucille decides to go ahead and fake that alcohol problem in hopes of manipulating Tobias into releasing her early. (“That was an ac—?”) (She also demands that Gob start building that wall.)

Tobias gets right to business: “How ARE you?” She proposes that he call her cured and she’ll buy him a car. He doesn’t work that way. It’s a stalemate. With the two of them, a very stale mate, indeed.

They sit in silence until one day Tobias is fiddling around with the Fantastic Four script and mumbles something about the need for a villain. Something cracks in Lucille, something that’s not a nail or a glass. “You think I’m a villain?” She ticks off the list of people who seem to think that, but Tobias explains it’s a character in a play that will be performed on a boat. “TAKE TO THE SEA,” she remembers the young Zuckerkorn saying, and an escape plan hatches anew.

She’ll play “the old sea bitch,” she says. Rehearsals are going well until she gets a call from Oscar, who she thinks is George. She tells him that Gene Parmesan has pictures of Herbert Love having sex with a redheaded whore, so they don’t have to worry about Love’s position on the wall. George/Oscar also tells her he wants to have sex, she tells him to meet her at Cinco, with a boat.

Michael also comes calling. They agree to exchange signatures on the various rights they need to release. They also exchange some intel about Lindsay (she’s the Love redhead), as well as Rebel Alley. Michael has gathered that she’s dating someone named “George Maharris.” Lucille suggests that maybe that is “George” as in “George Oscar Bluth.” But why not get proof, she says. Take the family P.I., Gene Parmesan! Eeeeeiiii!

And now to the Cinco de Quatro clown car: Lucille, it turns out, is in the gang of substance abusers who show up at the pier to put on the musical, though she immediately slips off to look for the boat that she asked George (Oscar) to have running and ready to go. But instead she runs into the real George first (who is really not quite himself). She’s confused why he’s confused, but then he realizes she’s been pillow-talking to Oscar and “he’s been filling in for me.” Ahem. “I got in there a couple of times, too.” Cough.

She demands a real divorce and storms off, only to run into the real Oscar, who passionately declares his love for her. When they embrace, however, she finds a Lucille Two campaign sticker on his ass. The narrator explains that it must have gotten there “while he was polling her.” Disappointed yet again, she wanders off only to run into Tobias.

Tobias tells her she’s not the villain, she’s the invisible girl. Tobias means this more literally than she thinks (he’d like her to take the Sue Storm part), but it’s a revelation to Lucille, whose star rises even as Lucille Two’s fades.

Things that are jokes from past seasons (you saw something? Say something!):

Jokes that are fresher than Lucille Two’s references (got more?)

Meta shit (surprisingly little, but I assume I missed things):

When Lucille derides George for “Steamboat Willie–ing” the fake wall (he drives around and around a silo), my first thought was of other early animations: zoetropes, which are really kind of the opposite of what George was doing. But it turns out there’s a different meta joke available: “Steamboat Willie,” according to Wikipedia, “has been the center of a variety of controversies regarding copyright.”

I don’t think there are any notable new ones!

R.I.P., Sci-Fi Giant Richard Matheson, Author of I Am Legend