And Then There Was One: Mariah Carey and Nicki Minaj Officially Out at American Idol, Leaving Keith Urban All Alone 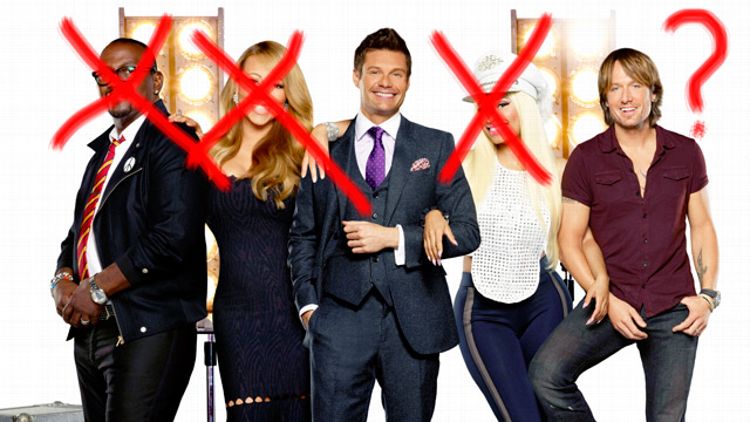 Just hours before the finale of what was widely believed to be the worst season in American Idol history, 12-cycle veteran Randy Jackson quietly gathered his belongings, whispered a despairing triple-Yo to his slumbering colleagues, and stole away in the last available lifeboat, watching as the Karaoke Titanic he was leaving behind continued its quickening descent to the bottom of the prime-time ocean. A captain might need to go down with his ship, but a dawg gets out while the getting is good.

Randy’s now joined by the ghosts of Mariah Carey and Nicki Minaj, who perished in that wreck, but yesterday issued tweets from beyond the watery grave confirming what we’ve already known for weeks: They will not be returning as Idol judges. First, Carey, via a retweet of her publicists, because do you think The Queen issues her edicts in 140 characters? Don’t be an idiot:

Hot on the diva’s tail was Minaj, presumably composing her good-bye while wearing a hot-pink Beefeater uniform, just for old time’s sake:

Thank you American Idol for a life changing experience! Wouldn’t trade it for the world! Time to focus on the Music!!! Mmmuuuaahhh!!!

These three departures leave Keith Urban the only one left sitting behind the judges table, a situation we imagine will be remedied just as soon as the producer tasked with informing him that’s it time to focus on his music career can reach him inside his walk-in T-shirt closet, where he’s been worriedly folding and unfolding dozens of horse-emblazoned crew necks while awaiting news of his fate and hiding from Nicole Kidman’s withering, icy gaze. And from the sting of her riding crop, which Urban can already hear slapping against her palm as she patiently waits outside his cedar-lined sanctuary, ready to deliver the punishment he knows, in his heart of hearts, he deserves. Failure is not an option in their household.

In any case, a new era of Idol judging will dawn next season. Will they fill the panel with Jennifer Hudson and a crew of fellow alumni, celebrating the homegrown stars the franchise has produced in its dozen years of existence? Or will they once again lay out eight figures for a Big Name, hoping against hope that this new centerpiece doesn’t nap away three-quarters of the season, like Carey did, before snapping awake and babbling her way through the final month as though awakened from a bad dream by a bucket of cold water?

The answer: Oh, god, don’t even make us think about this right now. It’s bad enough that Urban will soon crawl out of that closet on all fours, wearing his gilded punishment-saddle, ready to accept his lashes. He deserves better. Stay strong, gentle one, for you are too beautiful for this ugly world. It will all be over soon.

Video on Demand Report: Don't Let the Nice Weather and a Slow Week on VOD Deter You From Spending the Weekend Indoors