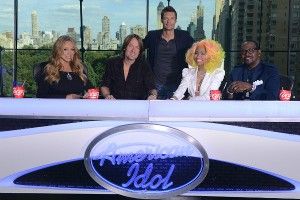 When last we checked in on American Idol‘s chaotic staffing situation, following a breathless report that Nicki Minaj was “100 percent confirmed” to join soon-to-be mortal diva-enemy Mariah Carey behind the judging table, we’d assumed some kind of announcement solidifying the entire lineup would be forthcoming. And then we waited. Oh, how we waited. We waited through the briefly exciting Kanye rumors, the not-nearly-as-enticing Jo-Bro whisperings, the inter-office who-says-no? fights about getting an increasingly desperate Madonna on the show, and a brief hallucination about a Michael Jackson holo-judge who giggles that every performance is either “delicious” or “devilish.” Then came the return of The Voice, and two entire episodes of The X Factor in which a stalker-besieged Britney Spears did not light herself on fire, and still no news. But now, nearly a month after the initial shake-up, we finally have our new and not-improved-in-any-discernible-way Idol panel, via Ryan Seacrest’s Twitter feed:

Mariah Carey, Keith Urban, Nicki Minaj, and … Randy Jackson, who, it seems, somehow avoided being fed into the mentorship wood chipper to return to his customary position of utter uselessness at the judges’ table.

And somewhere, Simon Cowell cackles in delight, mutters something nonsensical about having seen better judges on a cruise ship, then gleefully fires Nicole Scherzinger from X Factor UK just to keep the jollies rolling.

Cowell’s presumptive joy in Idol‘s failures notwithstanding, this is a terrible panel. Back in July, things started promisingly enough with the deck-clearing moves (J.Lo and Steve Tyler out, Randy moving to mentor) that accompanied Carey’s signing. With the sad reality of the new team before us, we now have to ask: Are they just giving up? Will Season 12 be the final one, a last attempt to squeeze the last bit of life out of the hobbled franchise? Will The Voice sue them for cloning their winning judges’ concept? (The math adds up: Mariah = Xtina, Urban = Blake Shelton, Minaj = Cee Lo, and, um, Randy and Adam Levine both possess the ability to sit in chairs.) It definitely feels like a white-flag-waving moment; with the chance to make at least one more splash the size of the Carey announcement, they went small, unless your idea of a splashy move is hiring Nicole Kidman’s husband.

Here’s the best-case scenario for a Season 12 judging run:

Mariah: “Oh, honey, I think you’re great, but I’ve just always liked my version of ‘We Belong Together’ better.”

Minaj: [Wearing a hot-pink Barney costume with glittery bat wings for no discernible reason.] “Someone bring me a turkey sandwich! What city is this? WHAAAAAAT? [Storms off.]

Randy: I don’t even know, dawg, she had a turkey sandwich in the green room already. Good one, too.

Seacrest: Well, while we look into this turkey-sandwich situation …

Yeah, we’d watch that, but that’s the best-case scenario. What we’re probably going to get is a bored Minaj, twirling locks of purple and yellow hair, offering up a defeated “I dunno, I didn’t feel it” right alongside the usual uncritical cheerleading of the other judges, once we’re past Hollywood Week and death-marching our way toward another tween-powered, inevitable cute-boy-with-guitar win. So, come January, should we still have the energy to check out the new kids after the double-barreled Voice/Factor fall season gives us all the prime-time karaoke we can handle, we’re essentially hoping Nicki Minaj loses her mind for the entertainment value.

But maybe this is the beginning of the end. And maybe we won’t even care.