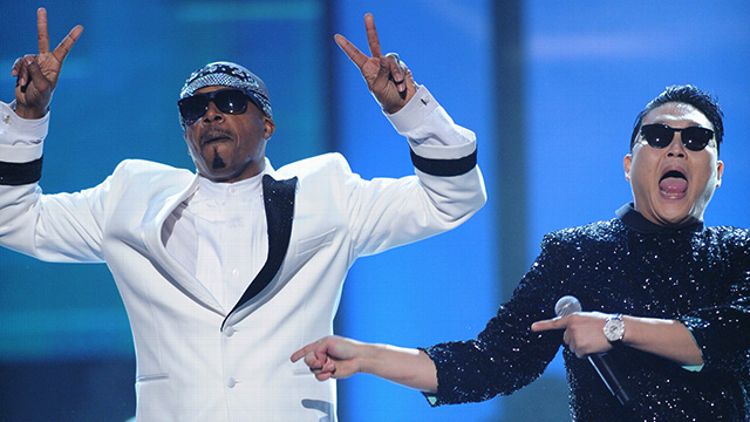 Ah, the American Music Awards. For 40 years now they’ve been going strong, unspooling a rich populist music history. (Did you know that in 1974 Donny Osmond co-hosted with a 16-year-old Michael Jackson? Amazing.) And yet, every year, I totally forget they exist. But they do! And last night, the 2012 edition took place at the Nokia Theater in lovely Los Angeles, California. What went down?

Justin Bieber, still embroiled in a heated will-they-or-won’t-they with his lady Selena Gomez, showed up with his mom. He won a couple of awards, opting to thank “all the haters who thought that I was just here for one or two years” (think again, haters!). He also performed, doing an acoustic “As Long as You Love Me” and a spirited “Beauty and a Beat.” Nicki Minaj, who got a solo turn elsewhere in the show, popped up to do her verse on the latter track, and opted not to censor that bit where she shouts out Ms. Gomez. Also: For a second she placed her butt in front of Bieber, so that he could dance up on it, but I’m pretty sure she grabs his wrist before he can get any fresh ideas about where his hands are going, young man.

While Taylor Swift’s unabashed pop embrace on Red has been a massive smash saleswise, there’s still some rough edges. Namely that, when performing live, Swift has dropped guitar playing in favor of big ol’ choreography set pieces; this has been, for the most part, awkward as hell. Last night, though, I actually thought she did a pretty good job? Angry diva face, mid-set costume change, some labored story telling vis-à-vis the dudes in the masks … not a bad execution of “I Knew You Were Trouble,” a.k.a. “the Taylor Swift dubstep song.”

Ke$ha did “Die Young” with an army of handsome skull men drummers, which certainly didn’t take away from the undeniable virtues of “Die Young.” The real star here, though, is Cyndi Lauper, who intros Ke$ha in gloriously rambling fashion: “It’s my privilege to introduce this female performer, singing one of her hottest songs this year …” By the way, has Cyndi always talked like a 1950s dockworker/Ryan Gosling, or is that something new?

In the middle part of his medley, during perfect heartbreak lament “Climax,” Usher started dramatically sprinting on a treadmill, a sort-of nod to the suffocating futility of a doomed relationship. A treadmill? Look, I don’t know what kind of dude Jay Kay is, but if he’s pissed off right now, I’d understand.

How was it that MC Hammer came out with Psy to do “2 Legit 2 Quit”? Allow Hammer to explain: “Scooter Braun [who manages Bieber and Psy] connected us, and [when] I spoke with Psy I knew right away that he is a good guy. I like working with good people.” Psy: international viral phenomenon, and Hammer-approved model of virtue.

For her medley, Christina Aguilera posted up outside a mobile home with dancers in hoods wearing words representing, presumably, the criticism that has been levied against her ever since she started doing stuff like getting arrested for public intoxication. There are guys wearing ones that say “Pig,” and “Fake,” and “Weird,” and “Loser,” and “Queen.” (“Queen”! Can’t leave out all those people who were complaining about how Christina Aguilera was too much of a queen.) And then, as Chris hits her crescendo, the dancers toss off their hoods, like so much petty nonsense, and begin fist-dancing with all of their might, metaphorically encapsulating with great exactitude the tensile strength of Christina Aguilera’s unbroken spirit. In other words, Christina Aguilera wins.