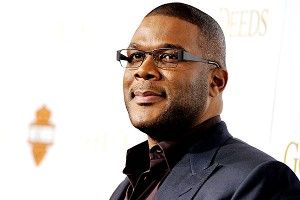 Well, this is certainly an odd pairing: Alex Cross — an adaptation of yet another James Patterson paperback smash hit, this one about a psychologist/cop facing off against a dastardly serial killer — features not one but two familiar faces playing against type. In this corner we have Tyler Perry, in a rare sighting outside the Tyler Perry Presents … universe. He’s the quiet, loyal, uber-competent family man Alex Cross (it’s the same guy Morgan Freeman played in Along Came a Spider), which would be a familiar role from Perry’s more dramatic in-house fare, most recently February’s Good Deeds — if it wasn’t for the fact that Perry also has to jump in the air while shooting a gun, and run around sweaty yelling out orders at confused subordinates, and ominously whisper bonkers preposterous stuff like “I will meet his soul at the gates of hell before I let him take a person that I love.”

By the way, Idris Elba was originally booked for the role, and when the casting switch happened, co-producer Bill Block had an interesting explanation: “Sure, Idris is a great actor; Tyler Perry is one of the most significant entertainers in all of media … and he’s a terrific actor whose range is going to be shown here. You’re going to see Tyler Perry like you haven’t seen him. He’s 6’5″, he is a linebacker. He is an awesome physical presence and is just going to tear it apart here.” Plenty to pick apart there! But no time, no time. Because in the other corner is an even more unlikely individual: Why, hello, crazy jacked shaved-head serial killer Matthew Fox! Again, you could argue we’ve seen some of this intensity from Fox before, in the nuttier beardo days of Lost‘s Jack Shephard. But then he has to crank his head to the side in a villainous fashion and scuba dive through a building pipe (???) and say bonkers preposterous stuff like “Inflicting pain is a crucial part of my true calling.” In related news: I am totally seeing this movie.