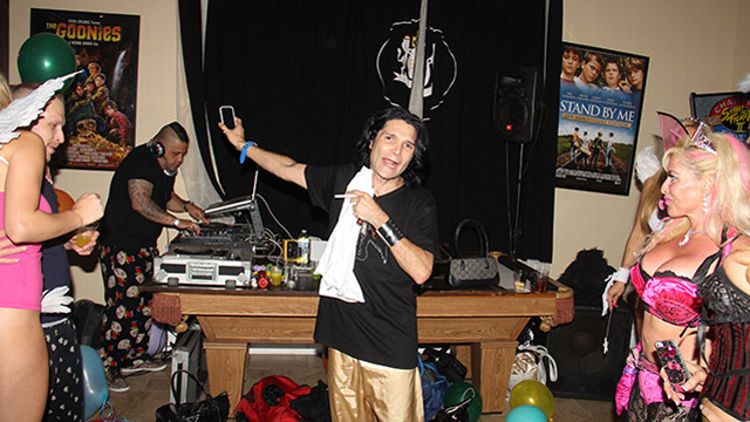 Childult actor and budding party-mogul Corey Feldman (The Goonies, Stand by Me, Zero Dark Dirty) recently allowed Vice into his home — [clears throat theatrically] excuse us, The Feldmansion — to celebrate his birthday and participate in his latest business venture: Corey’s Angels, a combustible mix of marginal celebrity, misguided entrepreneurship, and a dangerously downmarket, heaven-themed restaurant’s worth of hostessing seraphim. For the low, low cost of $250, chill dudes can pay for the privilege of warming themselves by the burnt match head of Feldman’s Hollywood sizzle, cavorting through the kind of cracked-mirror Playboy fantasia where your Bizarro Hef resembles a late-model Ozzy Osbourne who decorates his fuck-grotto with vintage Street Fighter machines. And the ladies, it should be noted, get in for free. (But only when pre-approved, if for no other reason than to ensure that the naughty-cherub supply store on Melrose wouldn’t run out of fuzzy halo-and-wings sets and plunge the entire event into the Dr. Moreau–style chaos of “angels” wearing surplus cheetah ears and devil tails.)

The Vice report from the party, which you should read in full right now, is every bit as depressing as you’d expect, even after having its text vetted by Feldman himself. And maybe that’s why Corey immediately took to Twitter to rail against the backstabbing ingrates who chose to focus on the midrange-Brookstone-quality massage chairs and skewed Lost Boys posters of it all rather than the bitchin’, premium-priced time being enjoyed by everyone not secreting Internet treachery in their jealousy-blackened hearts:

Im really sad that there r so many liars n haters n the world. This online site went out of the way to make beautiful ppl look bad..so sad!

Every1 who was there last Fri had an amazing time, and it was beautiful, I truly hope U aren't deceived by those horrid photos!

After a cooling-down period, it seemed that Feldman doffed the Sexual Snape costume, let bygones be bygones, and returned to the more mundane parts of empire-building.

Enough of the fighting and recriminations. It looks like Corey and his angels are going to be just fine.

Next Up on the Celebrity Kickstarter Carousel: Sylvester Stallone

Justin Timberlake Is NOT Cheating on Jessica Biel With His Cousin ... and Other Close Calls From This Week's Tabloids