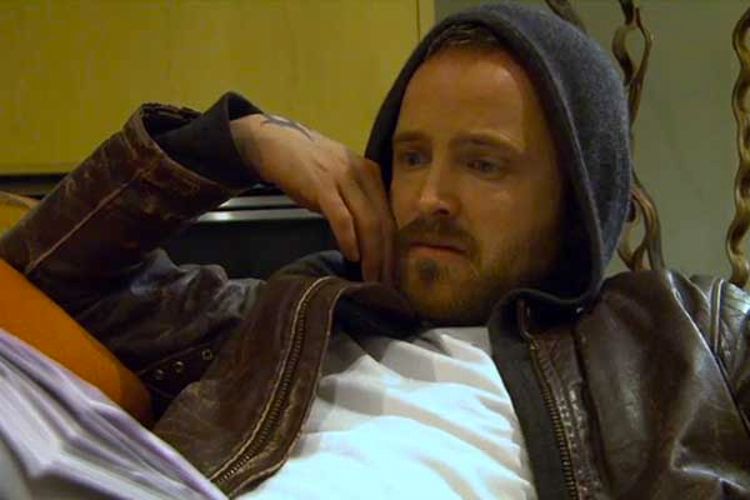 Thank goodness someone was thoughtful enough to film Bryan Cranston and Aaron Paul reading the final pages of the Breaking Bad finale’s script. Paul is so good at tearing up that he even gets a little misty listening to Cranston read Jesse’s fate. Apparently the clip is part of a two-hour documentary about the making of the final season, which sounds sensational. In ancillary BrBa news, Vince Gilligan re-upped with Sony Pictures TV today, signing an eight-figure deal that will keep his future TV projects in-house.

Speaking of Breaking Bad: Here’s the new, best-so-far trailer for Aaron Paul’s Need for Speed. Come for the cars (and the Michael Keaton!?!?), tolerate the “yo mama” jokes. [h/t Pop Culture Brain]

Sequel alert: 1946’s It’s a Wonderful Life may get a follow-up, subtitled The Rest of the Story, in time for the 2015 holiday season. (Or it may not.)

Just on the beautiful side of creepy: portraits of deceased rock stars if they’d lived till today. Hendrix, Lennon, Joplin, Cobain, and more.

How I Met Your Dad (refresher here) did indeed get a pilot order. Notice how far that new title distances it from How I Met Your Mother, then go practice pronouncing HIMYD aloud.

Jim Belushi would prefer that his son star in his brother’s biopic rather than Emile Hirsch.

Kanye’s been busy: He got his gigantic LED screen fixed up and resumed the Yeezus tour, he spoke at the Harvard Graduate School of Design, and he had an hour-long conversation with Bret Easton Ellis. (There Will Be Blood is the most recent film Kanye’s watched in the 30-to-40-times range. Same for me, man. Best movie ever.)

Judy Greer’s memoir will be called I Don’t Know What You Know Me From [Ed note: Arrested Development, The Descendants, general awesomeness]: Confessions of a Co-Star. And EW has the cover.

After its second cancellation, The Killing has been salvaged by Netflix for what’ll be called the “final” season.