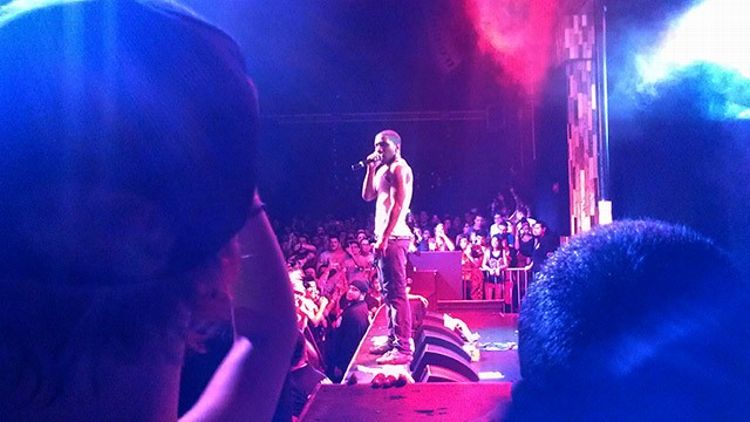 There is plenty of time to discuss Lil B’s mystique, but first I have to address his shoes. See, Lil B has worn the same pair of Vans for too many years, and as such, his Vans have an impossible patina, like shoes you’d find on a rescue mission airboating through the Everglades. The toe box (or lack thereof) is barely holding onto its integrity. The outer canvas fabric has long since worn away, leaving only a thin strip of the inner fabric to maintain the guise of close-toed shoes. It’s truly a modern marvel. The Bay Area rapper has famously said he won’t stop wearing the shoes until he makes a million dollars. Lil B is nothing if not committed. And his unwavering conviction over the years, along with his quest to share his convictions with anyone willing to listen, is how he was able to command a legion of passionate followers to the Observatory, a quaint theater tucked inside an industrial park in Santa Ana, California.

It all started with the shoes. Lil B first rose to national, albeit short-lived, prominence as a member of the Bay Area rap group the Pack, when they released “Vans” in 2006, when he was 16. It’s been a long, bizarre trip since then. Somewhere along the way he became the Based God, wrote a book at 19, scattered thousands of tracks all across social media, became one of Time Magazine’s best Twitter feeds of 2013, developed his own holistic life philosophy, and became an early martyr for weird contemporary rap — and he’s only 23. His own pair of Vans is a walk(-assist)ing metaphor.

But the Santa Ana crowd came dangerously close to seeing it all end with those shoes on Friday night. Halfway into the show, Lil B told his DJ to stop the music. He was standing on top of a speaker system embracing his fans, but one fan went too far. She tugged at his Vans, very likely tearing deeper into one of the shoe’s many holes. Lil B stopped to give a lecture (but not that kind of lecture). Main takeaway: One is not to touch the Based God’s shoes. They are very precious and very rare (they were last estimated to be worth $45,000, according to Lil B). He took the shoe off, paced across the stage a couple times screaming “NOOOO!” as the crowd stood in stunned silence. But part of being “Based,” as Lil B has explained, is finding and embracing positivity. After a few runs (which were done tongue-in-cheek), he put the shoe back on and said, “We can try to fix it.”

It was a very #rare appearance for the Based God, his first headlining, non-festival concert in Southern California since 2010. Lil B concerts are surreal — equal parts Juggalo gathering without the heavy drugs, self-help seminar, and kitchen-tools-and-gadgets convention. Kids show up in aprons holding spatulas, a nod to Lil B’s famous “cooking” dance, and pink bandannas to show their allegiance to Lil B and to one another as Lil B’s guardians. Sometimes Lil B led chants of “I love Earth” and sometimes he asked us to repeat his weird cooing noises. We were all more than happy to oblige. When newcomers first listen to Lil B, the question always arises: Is this guy a joke? And the answer is yes, he is. But if you don’t vibe with his brand of humor, there won’t be much for you in Lil B. This is a guy who spent a good four minutes at the front of the stage walking an imaginary tightrope, flexing in slow motion. Finding him funny is the gateway to finding him compelling.

There was a remarkable sense of wholeness in the show. Immediately after performing “Breathe Slow,” which has several references to gun use, Lil B adamantly discouraged violence. He stressed that the crowd’s safety was his first priority, but when a fan who had evaded security botched a stage dive, Lil B gave him props for trying. Under a certain lens, the concert, and B’s music in general, exposed him as a contradiction. And maybe he is — but you get a sense that it’s all in a noble attempt to be everything to everyone. We often use truth to delineate right and wrong, real and fake. But in Based World, truth is all of it, everything all at once.

But obviously this kind of contradiction can lead to some problems, especially when it comes to Lil B’s predominantly teenage fan base. For many of his fans (and for Lil B himself), the Internet is home. It’s a space where the deluge of memes often disarms and decontextualizes his often misogynistic lyrics. But when these memes are transported into the public sphere, it gets more than a little uncomfortable. Decorum has never been a strong suit for teenagers, but when the girl who tugged at Lil B’s shoe almost derailed the entire night, a chant began among scattered members of the crowd, using one of Lil B’s more prominent misogynistic lines to convey their frustrations. It was and is unfortunate. Since Lil B’s product is mainly served up to meme-imbibing children, the mixed messages in Lil B’s music can unfortunately come off as endorsements.

Despite having pure intentions, Lil B’s many incongruities complicate things. It’s a burden he faces alone, and it can tire a person out. Lil B could be seen lying on the floor at points in the concert, at some points feigning exhaustion, at others really looking pooped — and with good reason. He ran the gamut of tracks, balancing ignorance with introspection, classics from his unending catalog and new material. He performed “I’m God,” his most essential song. He stretched “Wonton Soup,” the closest thing he has to a pop hit, into an eight-minute mantra, with fans jumping up and down, joyously reciting the chorus over and over and over again.

With Lil B, the gripe has always been “He can’t rap.” Many of his tracks follow a template, creating songs that resemble mindless Zen recitations. But in the latter portion of the show, he cut out the beats for two songs, “Real Person Music” and “Giving Up,” to put all eyes and ears on his presence and his verbal dexterity. It was a brazen and honestly gripping show of skill from a guy who critics often claim has none. “Giving Up,” as one could deduce from the title, is a pensive look at life and struggle. At the end of the song, there’s a lovely chant that goes “We won’t give up / We won’t give up / We won’t give up / We goin’ make it.” Except he never gets that far. Before the lyrics reach their bleakest, he cuts himself off by shouting, “SHUT UP, BRANDON. SHUT UP, LIL B.” The beat returns and blares. The giddy ignorance, as though it were a trapped animal, leaps forth. Everything comes full circle. This is the Lil B experience.

But the best moments with Lil B happened after the show was over. Lil B’s generosity toward his fans is unlike anything I’ve ever encountered. After the show, he stood off to the side of the stage for more than an hour and a half to sign autographs and take photos with any fan who wanted one. Each photo was accompanied by an earnest handshake, with full eye contact and a positive message. It was nearing 2 a.m. and there was still a crowd waiting to meet the Based God. The security guards stood around perplexed. When they weren’t looking at their phones, they were inventing reasons to get mad at the kids.

My friend Jon came to the show with copies of 2009’s I’m Thraxx and 6 Kiss, the only two Lil B albums to be sold as physical CDs. Jon brought them out to envious gasps from the crowd. In a night of rarities, he had the #rarest Based artifact of all. Even Lil B, who was visibly weary at this point, was impressed. The albums were very rare collectibles, he told Jon, and mentioned his desire to release more physical copies of his music if it weren’t for the long and tedious process. As Jon gave the Based God dap and a parting farewell, Lil B pulled him over and said, “I’ll see you soon.”

But the Based God is elusive. I get the sense that whenever soon is, it won’t be soon enough.

Danny Chau (@dannychau) is an intern at Grantland. He got Lil B to sign a $1 bill. He’s in the process of framing it.

Filed Under: Lil B, We Went there

See all Lil B