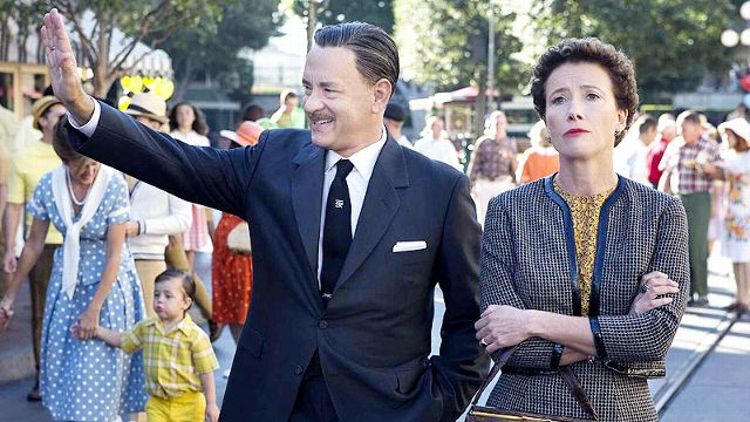 In Saving Mr. Banks, Emma Thompson plays Mary Poppins author P.L. Travers. It’s the early 1960s, and Travers keeps her hair in a short, close perm. She wears body-hugging tweed suits and her face is frozen in a clench of exasperation. Everything about her is tight, which is meant to make her eventual emotional undoing seem psychological. Because Walt Disney really loves her book, Travers has been flown from London to Los Angeles to help turn it into a movie. He’s been trying for 20 years, and for 20 years, the answer has been “no.” But now she’s broke and blocked and doesn’t want to lose her house.

So she deigns to visit a city she finds hideous, negotiate with a man she finds smarmy, and work on a film she’s sure to detest. Travers’s mornings and afternoons are spent first condescending to her driver (Paul Giamatti) and then in a bungalow on the Disney lot with Don DaGradi (Bradley Whitford), a veteran screenwriter, and Robert and Richard M. Sherman (B.J. Novak and Jason Schwartzman, respectively), the legendary Disney songwriters. She might as well be at Alcatraz. But in her mind, these men work for her, not Disney. Travers wants the sessions recorded. She makes a withering comparison between Laurence Olivier and Dick Van Dyke and bemoans the songs that the Saving Mr. Banks audience already knows are classics. People are going to be tempted to say, “I didn’t know Cruella de Vil wrote children’s books.”

You know where this is headed — not because there’s a finished film to prove it, but because Disney is played by Tom Hanks. The debonair geniality Hanks gives the role is so specific (he’s graying, tanned, and moustached; he keeps his smoking a secret, but you detect a polite cigarette musk about him), and the more he asks Travers to consider the happiness a Mary Poppins musical will bring to all the children of the world, the Grinchier that Travers is meant to seem.

Meanwhile, the movie makes overbearing use of flashbacks to Travers’s Australian childhood, with Colin Farrell as her beloved drunken Irish father. Those are all a setup for a dramatic collision with the present that you can see coming after about five minutes. Very little of the history here appears to be true. Disney was more of a businessman about the adaptation, and Travers wasn’t the sourpuss she’s supposed to be here. In fact, an audiotape from one of the early sessions plays during the closing credits. It’s of a scene reenacted in the film, and Travers sounds kinder and more reasonable than Thompson’s version. So what on earth is the point? And why would an actor want to play a role in what is effectively a sort of character assassination?

The movie is written by Kelly Marcel and Sue Smith, and directed by John Lee Hancock, who made The Blind Side. It’s almost lawyerly in its manipulation. What they’ve done with Travers is subjugated her to a bunch of men. She rejects informality of all kinds and demands to be called “Mrs. Travers,” even though she never married. There are parts here for Kathy Baker and Melanie Paxson, who’s terrific. Baker is credited as playing an executive, but she seems like one of Disney’s secretaries; Paxson’s character actually is one. And Travers doesn’t really talk to either of them.

The movie winds up using all of Travers’s childhood misfortunes (then those of her driver’s daughter) against her. It’s as though Travers’s biography is the only reason she might object to a musical. Really, isn’t she to be admired for weighing the costs of working with Hollywood? In reality, the finished version of Mary Poppins left her bitter (she disliked the animation sequences). In this telling, the movie leaves her bawling. The whole thing leaves you with an appalling chill. It feels like a warning from Hollywood to the ambivalent creators of anything: Take the spoonful of sugar or we’ll force-feed it to you.

Now That Treme’s Over, It's Time to Give It Another Chance