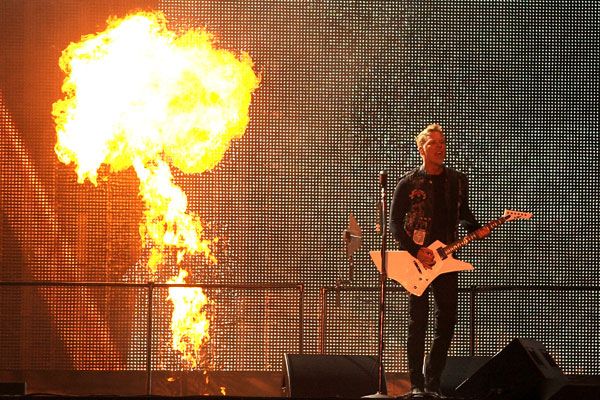 For the past decade, every large-scale Metallica concert has started the same way. When the waiting ends, a video comes on the large screens flanked to each side of the stage. It’s a scene from The Good, the Bad and the Ugly, the one in which Tuco frantically searches the graveyard for the buried gold coins. The soundtrack, Ennio Morricone’s “Ecstasy of Gold,” has introduced every Metallica show for more than 20 years.

That video is how my first concert started. It was 2003, and my dad had driven some friends and me to Metallica’s Summer Sanitarium show at the Hawthorne Race Course in Cicero, Illinois. It was a month before my 16th birthday. At one point in the drive, I tried to put some Metallica on the CD player when our only concert veteran friend stopped me. “There’s only a couple rules,” he said. “No listening to the band, and no wearing their T-shirts.” Since I’d already broken the second rule, I got defensive and informed him that this was a stupid idea. I haven’t done either since.

On Saturday in San Francisco’s Golden Gate Park, not much had changed, save the size of our midsections and that there were beers in our hands. I stood with that same friend, and a week after seeing Black Sabbath play Lollapalooza, we waited for Metallica to begin a hometown show to a packed Outside Lands festival. The video came on 15 minutes before they were scheduled to start, and it was clear what sort of night it’d be. “Ecstasy of Gold” turned into “Hit the Lights,” the band’s first song, recorded back in 1981, and I looked at my friend and smiled like an idiot.

When my Metallica obsession began at 14, it started as a way to consciously feel like an outsider. (That notion seems hilarious now. Yesterday was the 21st birthday of the band’s 1991 self-titled “Black Album,” a record that’s sold more copies than any other during that span. I rebelled by tying myself to the biggest band in the world.) By 16, I owned a dozen Metallica T-shirts, and as I listened to the crowd sing the interlude to “Master of Puppets” on Saturday night, I had to imagine plenty of them did, too. No moment exhibits the cult of live Metallica more than everyone knowing to hum the notes of the guitar harmony in the middle of the 8:35 monster.

Like many of the hard-core Metallica fans I know, the stuff I’ve listened to most isn’t Ride the Lightning or … And Justice for All. It’s the live performance from the band’s 1989 stop in Seattle. Almost without exception, every Metallica song gains something from its live version, and for songs like “Creeping Death,” the studio version is nearly obsolete. The band’s shows have become such an ingrained part of the fan experience that Hetfield’s canned lines are now crowd expectations — “You want heavy? Metallica gives you heavy, baby!” before “Sad But True”; “Are you alive? How does it feel to be alive?” before the guitar solo in “Battery”; the “Die! Die!” chant in the final section of “Creeping Death.”

Those moments came Saturday night, each one an instant reminder of just how many times we’ve heard these songs before, even if they no longer landed as cleanly as they once did. The more intricate, isolated guitar pieces of songs like “Master of Puppets” weren’t as flawless. Lars Ulrich hasn’t gotten any better with age. “Creeping Death,” which used to be a force of nature in every live set, somehow hit a little less hard.

Still, this is a group of guys approaching their 50s, and the entire performance was as good as anyone could hope for in 2012. A new song that no one cared to hear, and the objectionable inclusion of “The Memory Remains,” were trumped by excellent renditions of “Blackened” and “Orion.” Playing the latter at such a monumental show felt anything but coincidental. For whatever reason, “Orion” has always seemed like the purest Metallica song. This is a band with a track comprised entirely of a bass solo, and yet I’ve never had an easier time picturing the late Cliff Burton plucking away than during the bass interlude of “Orion.” Amid all the shit blowing up and the thundering choruses and the moshing, it was a sweeping instrumental that highlighted the night.

Throughout the show Hetfield made it known how grateful the band was to be there. Playing Golden Gate Park was the final piece of the group’s history with the city, and when the show ended, the guys stuck around for a bit, soaking up the moment and tossing picks and drumsticks into the crowd.

The energy that comes along with that sort of gratitude was evident from the moment the show began, and was still there at the end. The show was bookended by another song from Kill ‘Em All, and when Hetfield’s mandated sing-along to the “Seek and Destroy” chorus began, I looked to my left and sang with a kid no older than 16 wearing a “Metal Up Your Ass” T-shirt. And all I could do was wonder how many more he had.

Filed Under: Metallica, We Went there