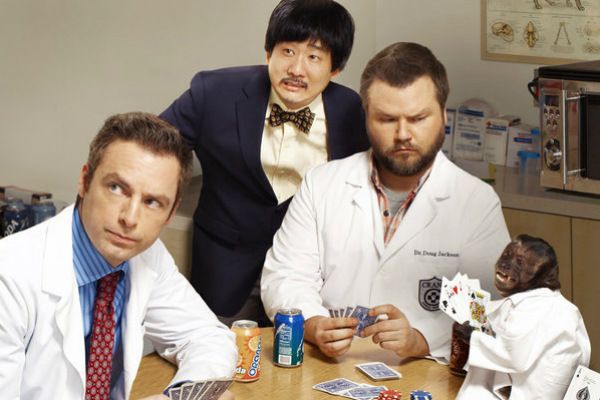 Too many people throw around the term “monkey show” like it’s a bad thing. Yes, Animal Practice — the second of NBC’s new “more broad” sitcoms to sneak-preview during the Olympics (it was the comedy last night that didn’t involve Brian May’s hair) — features a simian in a supporting role. But that’s like saying Damages stars the lead of 102 Dalmatians. Not all primates are created equal — not even the ones who, as the orangutan-ish humanoid Tyler Labine argues in the pilot, live in Brooklyn and hunt-and-gather from FreshDirect. After her virtuoso turns in blockbusters like Night at the Museum (she slapped Ben Stiller) and The Hangover Part II (she smoked cigarettes — just like a person!), Crystal is currently the biggest star on NBC by a large margin — despite barely standing two feet tall. As Dr. Rizzo (formerly “Zaius” — turns out those damn dirty apes can be litigious too), Crystal is energetic and delightful, whether running an illicit turtle-racing ring or merely doing rounds atop a toy ambulance. No, the producers of Animal Practice should be proud it is known as the monkey show. The monkey is the best thing in it.

It’s not that Animal Practice is bad, per se,  as much as it’s bizarre; like last week’s Go On, it’s an awkward graft of old-fashioned sap with newfangled snark. Starring the charismatically smug Justin Kirk (Weeds) as George Coleman, a lady-killing, human-hating veterinarian (alternate title: Animal House, M.D.), Practice aspires for the madcap mastery of a higher-class sitcom like Community, but too often settles for the barnyard. The Crane Animal hospital is nominally located in Manhattan, but its patient register is decidedly more exotic, packed with penguins, pigs, pythons, and a pregnant Bengal tiger — anything to service an increasingly barren trough of jokes. (One wonders what remains in the bestiary for Episode 2: a luck dragon? A pegacorn?) Labine is fine as George’s more sensitive wingman, as is veteran comic Bobby Lee as a simpering pile of nerves known as Dr. Yamamoto.

Less promising are UCB alum Betsy Sodaro, who seems to be doing an extended impression of Brian Baumgarner on The Office as nurse Angela, and JoAnna Garcia Swisher as Dorothy, the new administrator of the hospital and, conveniently, George’s ex. (Between this and The Newsroom, brilliant men getting bossed around by the leggy ladies who wronged them is kind of having a moment!) Garcia Swisher is a sunny presence, but the magnetism between her and Kirk — as they banter about Arby’s and make goo-goo eyes over an anesthetized Yorkie — is considerably less than animalistic. Worse, having Sodaro comment incessantly about the simmering sexual tension between the leads isn’t clever, and it’s definitely not a substitute for the real thing. It’s indicative of the lazy comedic shorthand that’s prevalent here and, to borrow a played-out trick from co-creators Alessandro Tanaka and Brian Gatewood’s script, it’s hilarious! And by “hilarious” I mean “exhausting.”

The thing about all comedy pilots is that even when the patient presents as deathly ill (or, worse, unfunny), the diagnosis isn’t necessarily fatal. There’s enough raw material here that, in weirder hands, could eventually be shaped into something worth watching. But I fear that NBC president Bob Greenblatt, in his desperate push toward the middle, is chasing a straw viewer with shows like Animal Practice. Neither wacky nor warm, neither fish nor fowl, it rings as hollow as George Coleman’s soon-to-be-rehabilitated heart.