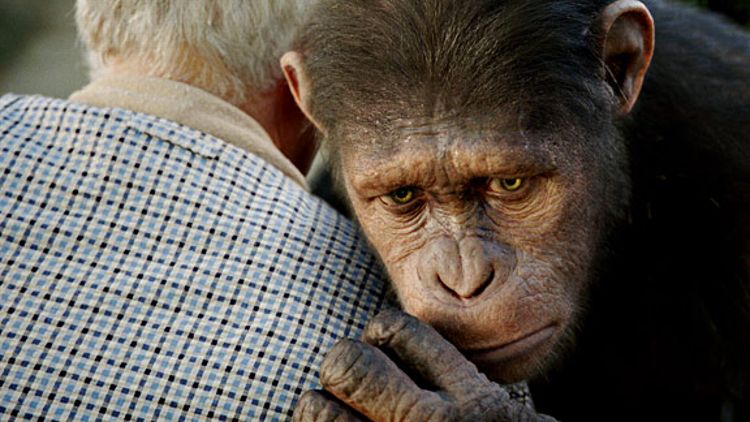 This weekend human beings by the tens of thousands will crowd into air-conditioned multiplexes, popcorn and Jujyfruits in hand, to see the surprisingly well-reviewed, Oscar-baiting Rise of the Planet of the Apes. There, in the artificially chilled, overpriced darkness, the enraptured masses will fall for the friendly, CGI face of Caesar, a revolutionary monkey, and thrill to his stirring, helicopter-destroying quest for freedom — or at least San Francisco. When the lights come up, some in the audience may be moved to applaud Caesar’s eventual triumph: the complete overthrow and subjugation of our own species. As Peter Debruge put it in his review for Variety, the film provides a “curious chance for humans to revel in their own destruction,” which strikes me as wildly perverse — a ludicrous example of voting-against-our-own-interests that makes Thomas Frank’s What’s the Matter With Kansas? seem as benign as The Wizard of Oz. Last I checked, the majority of moviegoers are human. Why are we suddenly so chuffed to cheer our own extinction?

It wasn’t always like this. Sixty years ago this fall, a film called The Day the Earth Stood Still arrived in American theaters. Playing off of Cold War anxieties, the picture established what would become a familiar formula: Human beings are special, with the capacity for great good and terrible evil. When aliens arrive — whether they look like Michael Rennie or Keanu “Klaatu” Reeves — it’s generally to serve as a trigger for us to get our shit together and stop building bombs, start saving the whales, or keep eating our mashed potatoes. The enduringly popular Star Trek universe is predicated on the idea that Homo sapiens are so wonderfully important and unique that every other being in the galaxy is able to speak perfect English and manages to look just like us, save for an occasional, budget-saving latex ridge here or there. And in more violent examples of sci-fi cinema, existential invasions both internal (Alien) and external (Independence Day) are unifying threats — definitive proof that there’s nothing humans can’t do if we put aside our differences and maintain a heavy hand with the catchphrases and MacBook computer viruses. Even the original Planet of the Apes was more of a cautionary tale detailing what those damn dirty apes are capable of if we’re not more vigilant about protecting our planet and keeping Charlton Heston’s shirt on.

Things changed with the new millennium. Whether it was a post-9/11 embrace of victimhood or merely a side effect of a more sensitive age, the new disaster films like The Day After Tomorrow and 2012 were apocalypse-porn, wide-screen musings on the end of humanity and how, on some level, maybe we sort of deserved it. Right alongside them came a series of films celebrating nonhumans as somehow better, more virtuous, and more worthy of inheriting the Earth than us klutzy normals: think vampires (Twilight), mutants (X-Men), or Brooklyn Decker (Just Go With It). This puzzling self-loathing reached its apogee in the execrable Twilight: New Moon in which a perfectly nice, if pale, human teenager offers to sacrifice her own young life for that of the pasty, ageless, blood-sucking he-devil she happens to be crushing on. And then, just when you thought our genetic self-esteem couldn’t fall any lower, came Avatar.

Prior to 2009, James Cameron had established a fairly pro-human track record as a filmmaker: both Aliens and Terminator were squarely in support of the flesh-and-blood-having community (although True Lies risked severely damaging the Earthling brand by nearly giving Tom Arnold a viable screen career). But Avatar went full-species-traitor as it presented a three-dimensional world in which heroic 10-foot-tall aliens the color of frozen Smurfs worship trees and humans look like Giovanni Ribisi. The mighty Sigourney Weaver once represented all that was tough, good, and marginally clothed about peopledom. Now her only goal in outer space was to toss away her human body like a worn-out T-shirt and be reincarnated as a hippie E.T. Needless to say, Avatar quickly became the highest-grossing film of all time.

Just what the hell is going on here? Sure, human beings are responsible for a ton of terrible, unforgivable things like the DMV, deep-dish pizza, and Dane Cook. And that’s just the letter D! But we’re also responsible for Dane Cook’s appearance on Louie last night, so it’s kind of a wash, right? We, as audiences, and particularly as Americans are conditioned to root for the underdog, whether it’s Hoosiers or, uh, Underdog. But as Rise of the Planet of the Apes arrives in theaters, practically demanding that we whoop our approval as the United States of America becomes Donkey Kong Country, it’s time someone stood up for the big guy and said — not signed (you stay out of this, Koko!) #&8212; enough. (It makes sense, by the way, that the sanctimonious nudists at PETA have endorsed Apes. Do I feel bad about the treatment of delicious chickens? I do! But I feel worse about the treatment of destitute humans.) We are human beings, dammit. We painted the Sistine Chapel ceiling and made the chooch from Smash Mouth eat two dozen eggs! We are a hilarious, messy, brilliant, ridiculous species, and it’s time we started taking some pride in it. So when the transforming UFOs land in our water, or the monkeys start massing on the bridges, I know which team I’ll be on. And, for good or ill, it’s the one with Dane Cook on it.

Filed Under: Avatar, Monkeys, Movies, Rise of the Planet of the Apes, Transformers, Twilight, X-Men

Outrage: Short Circuit to Be Rebooted as Non-Gritty Children's Movie