A Few Takeaways From the Big ‘New Yorker’ Darren Aronofsky Profile, Including Drugs, Explosions, and “A Whole F—ing Lot of Water” 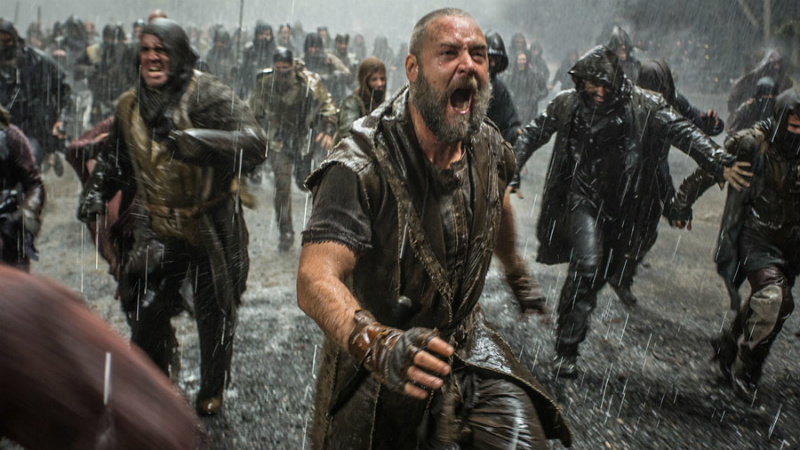 If you haven’t yet gotten psyched for Darren Aronofsky’s Noah — a very expensive, crazy ambitious, and super-dark reimagining of the flood story — well, what’s your deal, man? But also: Here comes a big ol’ Darren Aronofsky profile from The New Yorker to help you out. The always-indomitable Tad Friend, who’s been hanging around the project since it began shooting, in the fall of 2012, also gets to tag along with Aronofsky through editing room sessions, spats with the studio, and Coney Island childhood home visitations. And, in the process, we learn a few things that we’d like to share with you now. That said, definitely read the whole thing when you get a chance to steal your friend’s subscription login.

Darren vs. Russell: As with any “insanely laborious Hollywood project helmed by a famously prickly auteur” worth its weight, Noah had some issues with the suits. At one point, we find out, the studio, Paramount, cut a version of the movie designed to appeal to the droves who came out to see The Passion of the Christ; it was “an eighty-six-minute beatitude that began with a montage of religious imagery, ended with a Christian rock song, and skipped the whole middle.” And if it had tested well, then that’s the version we might well have been seeing. But luckily, it tested as ambivalently as all the other cuts, and so Darren gets to have his way. He says: “At this point, Paramount ninety-eight-per-cent supports everything I want in the movie. So I live and die by this version, and take full responsibility.”

Kind of a letdown, “Genius Director vs. A-hole Studio”–wise, right? Well, if you’re missing the conflict, maybe you can take some solace in Aronofsky’s working relationship with his Noah, Russell Crowe. At one point Aronofsky describes him as “an aikido opponent — you have to accept the force coming at you and work with it”; at another, Aronofsky shows no qualms about getting water all up in Crowe’s eyes, despite his protestations: “Crowe stabbed a ﬁnger at the monitor: ‘You see how the rain makes my eyes roll back when I look up?’ At the end of the shot, Noah watches a pillar of light soar to the heavens — the departing soul of one of the ark’s defenders. ‘We’ll lower the rain,’ Aronofsky promised, intending no such thing.”

Booms: Come to think of it, Aronofsky displayed a commendable lack of regard for most everyone’s personal comfort: “On the set, Emma Watson, contemplating the prospect of a tzohar bomb going off ten feet away, murmured to Aronofsky, ‘Can we practice this?’ He replied, ‘There is no practice. There’s only’ — he called to David Poole, his special-effcts foreperson, ‘Dave, is this safe?’ Poole replied, ‘I’ve done seventy-four movies.’ Aronofsky smiled at Watson and raised his arms in a benediction: This is the world I have made, and it is good and beautiful and reasonably safe.”

Drugs: For the record, within the Aronofksy filmography, it’s not just Noah that’s been a little nutty. Friend writes: “When Nina, the rigid ballerina played by Natalie Portman in Black Swan, ﬁnally loosens up after rolling on Ecstasy, the camerawork, too, strobes and skips and melts, and we’re brieﬂy having fun. ‘Darren’s not a druggie at all — he’s a nice Jewish boy from Brooklyn,’ Portman told me. ‘But he wanted me to try it before doing the scene. I said, ‘Just tell me what it’s like!’ So he did. When I mentioned Portman’s recollections to Aronofsky, he assumed an expression of exaggerated rectitude. ‘I would never encourage Natalie to do drugs,’ he said. ‘Write that down. I think Google is an incredible research resource. C’mon, write that down.'”

"Actually, the last thing we shot with Matthew [McConaughey], which was really great because we got to surprise him, was from episode seven when Marty’s watching the video tape Rust stole from the Tuttle house and Matthew has his back to Woody. We start rolling and I keep it going and we gather the entire crew right outside the storage unit. We slammed the doors open, which kind of shocked him for a second, and then the whole crew was there to clap for him. It was pretty awesome."