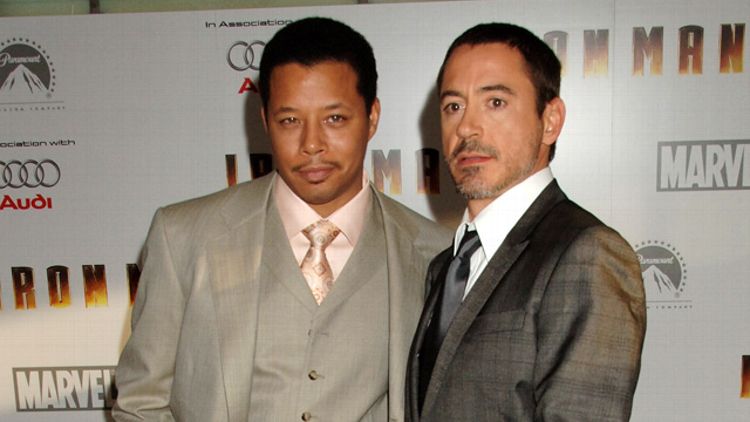 Terrence Howard helped build the Iron Man franchise, not in the sense that he played a character whose name I remember, but in the sense that he was in the first movie. But when Iron Man 2 rolled up two years later, Howard was gone and Don Cheadle was there, evidently playing the same guy, one Col. James “Rhodey” Rhodes, only with a different face. Howard dug back into this five-year-old switcheroo on Bravo’s Watch What Happens Live last night — and offered a new indictment of Robert Downey Jr. in the process — but let’s refamiliarize ourselves with the history first.

November 2008, six months after Iron Man hit theaters: EW writes that Howard was the first to sign on to the film and thus received the highest salary. The report alleges that Howard exhibited “difficult behavior” on set and director Jon Favreau was “ultimately unhappy with Howard’s performance, and spent a lot of time cutting and reshooting his scenes.” In writing the sequel, Favreau and Justin Theroux scaled down the Rhodey role. Then “the studio went to the actor’s agents with a new and drastically reduced offer — a number that’s similar to what supporting cast members were paid for the first movie. The agents, according to sources, were so taken aback by this new figure — estimated at somewhere between a 50 and 80 percent pay cut — that they questioned it.” Apparently nobody ever told Howard about his behavioral problems. Howard’s publicist only says, “Terrence had a tremendous experience working on Iron Man.” This is the first report, and the impression that will stick for a while.

Same month, same year: Robert Downey Jr. tells MTV, “I had nothing to do with that decision. I love Terrence very, very much. That’s all I’ll say, because I haven’t talked to him yet … It’s one of those situations where I still don’t quite know what happened or why. Here’s what happens, too: things happen and you wind up commenting on them before you’ve actually talked to the people and it’s in poor taste.” Very diplomatic, very lame.

May 2010, in tandem with Iron Man 2’s debut: Howard tells E!: “Despite the customary idea or thought that there’s some controversy, it was a wonderful split and I know that they’ve done well. Robert Downey Jr. was born to play that part and it was wonderful that that part has given him the stature that he was supposed to hold before. For me to have recommended him, it means all the more so that I helped someone get to where they are supposed to go. Marvel and I are now talking about doing some other things. And Don Cheadle wanted to play that part before I wanted to play it, so everything is very well.” TL;DR: “You owe me, Rob,” and, “I never really cared about Iron Man movies. If you wanna care about Iron Man movies, Don, that’s whatever.”

March 2013: Howard sorta jokes to Hollywood.com: “The worst thing I’ve witnessed was Iron Man killing my career.” He laughs a lot, then adds: “Or trying to. They tried to.” Doesn’t seem upset.

Same month: Howard begins setting the record — or his version of it — straight, telling Sway he was paid $4.5 million for Iron Man. “The second time, they came and they said, ‘We think the movie will be successful with or without you, so instead of the $8 million we said we’re going to pay you, we’re going to let you come back for a million dollars.'” It blindsided Howard, who’d signed a three-picture contract and thought everything was good to go without any tomfoolery in the dollar signs department.

Present day: Promoting The Best Man Holiday, Howard takes a fan question over the phone: “Why you didn’t come back to Iron Man? I miss you in a uniform.” This sets off a truth-splosion, as related by Vulture: “Would you like to really know? Well, it turns out … in order for, um … this is gonna get me in a lot of trouble, but … it turns out that the person that I helped become Iron Man, when it was time to re-up for the second one, took the money that was supposed to go to me and pushed me out.” Howard is measured; he doesn’t sound like he’s talking trash, and what follows is the same story he told Sway eight months ago. Only this time, after the “we think the second one will be successful with or without you” part, there’s a new ending: “I called my friend [note: definitely Robert Downey Jr.] that I helped get the first job, and he [note: still definitely Robert Downey Jr.] didn’t call me back for three months.”

Ooof. Recall that Marvel once reportedly said, “Under no circumstances are we prepared to hire [Downey] for any price.” Recall that Howard says he had something to do with RDJ getting the gig. And now, asked where his feelings stand re: his filthy rich friend these days, Howard says, “Oh, I love him. God’s gonna bless him.” It’s opaque — the first half sounds genuine, the second half sounds eerie. But we don’t need to read between those lines anymore, because in a world where Robert Downey Jr. has become the face of Marvel and worked himself up to $50 million paydays, Terrence Howard no longer needs to be coy about how things played out. This is, for the first time, a real-life beef.

Songs of the Week: Jeezy Cooks Up the Rap Equivalent of an Onion Griddle Volcano, M.I.A. Lives Again