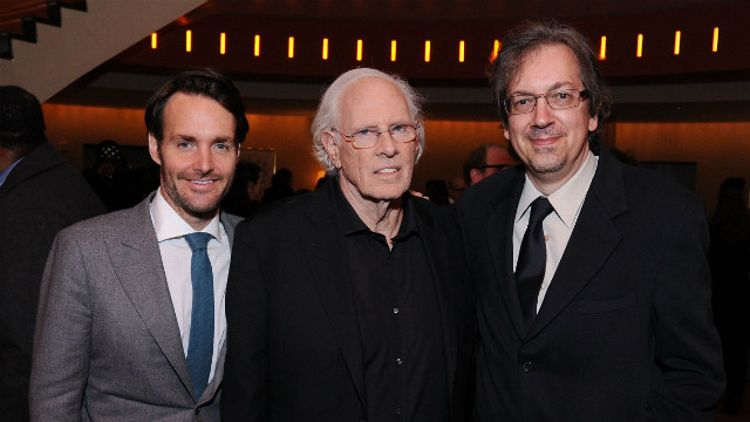 Alexander Payne is batting 1.000: From Citizen Ruth to Election to About Schmidt to Sideways to The Descendants, the director has crafted one wickedly funny, deceptively heartfelt, and totally crushing gem after another. I mean, Warren Schmidt’s last letter to Ngudu alone (“I’m weak. And I’m a failure. There’s just no getting around it”) is the colossus. Sprinkle in some Thomas Haden Church doing fleeing-from-enraged-cuckolded-husband full-frontal and Chris Klein rebuffing detractors with a simple “but bruh bruh, I was in Election,” and you’ve got one inimitable, very necessary career. His latest, Nebraska — featuring a career-capping turn from the sly Hollywood vet Bruce Dern, as a muddled old man attempting to cash in a bogus Publishers Clearing House million-dollar prize, alongside a son (Will Forte) still hoping for that bonding moment — is a sharp, at times hilarious, at times heartbreaking piece of filmmaking. In other words: It is triumphantly Payne-ian.

The screenwriter of Nebraska is Bob Nelson, and this is his first produced feature. But that doesn’t mean he doesn’t have some life experience of which to speak, including brushes with Chris Rock, Joel McHale, The Magic Hour, and — [airhorn] [airhorn] [airhorn] — Bill Goddamn Nye the Science Guy. Ahead of this week’s release of Nebraska, we caught up with Nelson.

So you got your start alongside Bill Nye?

We were on a show called Almost Live!, with an exclamation point, in Seattle. Bill Nye probably joined in ’88, I joined in ’89, and at that point the show switched to a half-hour sketch comedy format, and it ran for 10 years that way. We were on at 11:30, we pushed Saturday Night Live back to midnight [in Seattle].

Click here for all of our interviews with fascinating people from the worlds of sports and pop culture.
I don’t think Lorne Michaels thought that it was cool. But we did it. Bill was this Boeing engineer who started doing stand-up. The producer of Almost Live! saw him, they brought him in, he started doing his little comedy science segments on the show. So about two or three years into that, ’92 or ’93, Bill was able to use that to sell his own show.

He was Bill Nye the Science Guy then?

I’m pretty sure that’s what we called him when we introduced him for the segments. He liked that moniker, I think.

And then you guys worked together on another show.

Yeah. After our show ended I did a couple other things. I was getting ready to come to Hollywood to see if I could find work. I had just written Nebraska at that time. And Bill called and said, “I’m going to do a show for adults for about a year here on the local PBS station.” So I put my plans on hold for a year and I went and wrote and performed on The Eyes of Nye.

And while I was there, he brought in a producer from L.A. named Julie Thompson. I told her I’d written a script, and that I was planning on coming down there. She read it and said, “I know a producer from a charity whose board I’m on, Ron Yerxa.” I looked up his credits, and he’d done Election. So she got the script to him, and he sent it out to Alexander without even thinking of him directing. Just asking maybe he’d wanna be an executive producer, find a young up-and-coming director. And he shocked all of us by saying he wanted to do it. [Pause.] I’ve been told many times it doesn’t happen that way.

At that time he’d just done About Schmidt?

At the time he signed on, About Schmidt was just about to come out. The only thing I’d seen was Election, but I’d read interviews about the kind of movies he hoped to make in the future: dramatic, humanistic, about real people, real situations. I was a big fan of his from his interviews and Election alone.

What he told us is, “I’m just gearing up to shoot a movie called Sideways. Nebraska is not the movie after, but it’ll be the movie after the movie after. I’m done shooting in cars, making travel pictures, for a while. I’m gonna wait.” It was probably a little too close to About Schmidt, both these older protagonists. It was a good idea to have a little separation. But we didn’t know it’d be 10 years. We didn’t imagine it’d be seven years before he made the movie after Sideways. To me, every year, the question was, is he really still interested in directing Nebraska? And the answer always came back yes. People have asked me, was I anxious for 10 years? And for the most part, the answer was “no.” I’d heard he was a man of his word.

When you finally saw it for the first time after waiting so long, was it surreal?

The first time I saw it was in a screening room with a dozen other people in there giving him comments, because they were still editing. That was a little tough, trying to enjoy that. The next time was at Cannes, and that was pretty great. That was when I first got to see the movie as a film: just sit back and enjoy the experience with 2,000 on the big screen at Cannes. That was when it became very surreal.

Was there any “Oh, I can’t believe they cut that line!”?

Not too much. Alexander did his own draft before he shot, he sent that to me, asking for comments. We traded some emails. He sent me the final draft before shooting, and I knew he doesn’t vary much once he has a script down. He did a lot of nice work on it himself, but he’s not asking for a screen credit. Even though I’m listed as the sole writer, when I watch it, I see a lot of Alexander Payne in there.

Were you keeping up with casting rumors? I guess Jack Nicholson was up for the Bruce Dern role?

I would hear rumors but I would also talk to the producers. [Payne] said it was Bruce Dern in 2003. I don’t think an offer was ever sent to Jack Nicholson [officially]. A letter was sent to Gene Hackman to see if he was interested. I don’t know that he was necessarily offered the part, but it has been publicly stated that there was an inquiry sent to Gene Hackman. His response was that he was retired. I don’t know what Alexander went through with the studio, or even himself, but I think he always thought Bruce Dern would be a great choice.

And Bruce Dern lobbied for the role?

He certainly did know in 2003 that he wanted the part. [After reading the script] he went out to Toys R Us and bought a red truck and sent it to Alexander with a note: “I think I’m Woody.”

Was this your first attempt at writing a screenplay?

This was my first one. It was the first idea I had for a feature. I was all kind of hanging on this. I used a lot of personal stuff in it. Like, my dad was always having his tools stolen. He had his compressor stolen. He did fall down by the railroad tracks and lose his [false] teeth once. He was shot down in World War II. There were five of us kids, and we didn’t know about it until we were adults.

I loved the ending. Despite it all, it felt for a split second like maaaaybe Woody was going to collect his million dollars.

When I first wrote it, I saw that the ending would be tricky. If he won, it was too easy. If he lost, it could be too much of a downer. We just had to find a way to finesse that. I wanted to discourage the thought that he’d won pretty early on. And even if I hadn’t put that in, I’m sure Alexander would have taken it out. He tries to cut sentimentality when he can.

I knew what I wanted in the beginning was to have them driving through the main street of Hawthorne. In my script, David [the son] pulls out on a rural road and lets Woody drive. He’s sitting in the driver’s seat with his “Prize Winner” cap, in all his glory. Alexander combined the scenes and had Woody drive through the main road, which was the right choice.

Now you’re working on a project for Chris Rock?

Yeah, Chris Rock. I did a draft for him. I don’t know where that’s at right now. I’ve been told he does a lot of projects. That one might still happen. What I’m pushing right now is a project with another Almost Live! alum, Joel McHale. It’s called The Tribe and I wrote it specifically for him. We’re out trying to raise money on that one. I had been doing studio assignments but now I’m focusing again on originals.

One last thing I have to ask about: You were a writer on The Magic Hour. What the hell was that like?

It was a worthy try. [Magic Johnson’s] a great guy. It was fun for me to experience that, my first job in L.A.

But it was a train wreck. It was a disaster. [Laughs.] Bets were being taken around the writers’ room; were we gonna go longer than the Chevy Chase show? And we did! I’d left early but I got a call when it ended. I think they beat Chevy by a few weeks.