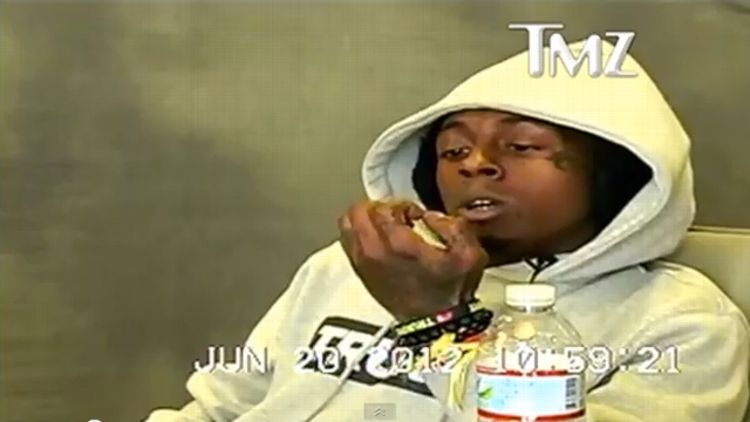 In 2009, The Carter was released, a documentary about Lil Wayne and the creation and lead-up to his highly anticipated Tha Carter III. Even though the film (a must-see, if I may add) was put out at the height of Lil Wayne’s critical acclaim and “best rapper alive-dom,” and showed how truly dedicated he was toward his craft of being a rapper, Wayne attempted (and failed) to block the film from ever being released, presumably because of the high level of recreational drug use on display from start to finish. (You wouldn’t want this released, either — he’s doing pretty much everything except taking Tussin bubble baths.)

What has happened since then? Wayne has gone on to sue Quincy Jones III, the producer of the film. After he filed suit, Wayne was questioned by Jones’s lawyer, David Ross of the law firm Browne (no relation?) George Ross, in what is known to us in the law world as a “deposition.”

While things of this matter should be kept behind closed doors, because they are private matters, coupled with the fact that I tend not to support TMZ, because they’re Internet snitches, TMZ has (of course) obtained a video of said deposition and it is simply too good to be real.

[The other parts of the video are here.]

Some technical information: This is a compilation of clips from one session, on June 20, 2012, but they aren’t in chronological order. While the full length of the deposition is unclear, we do know that the earliest time stamp is 10:55 and the latest is 12:27, so Mr. Carter was questioned by Mr. Ross for at least 92 minutes, which begins to explain the sass oozing out of Wayne’s pores. But that doesn’t explain everything. Yes, Wayne’s being difficult as expected, but what about this “Mr. Ross” character? He isn’t exactly helping the situation. So who’s more at fault? Who wins each borderline-stalemate round of this exchange? Let’s go through it and figure it out.

AT FAULT: David Ross. Stupid questions warrant stupid answers, David. If you’re going to ask this, do it before you watch the clip where it’s obviously Katie Couric interviewing Lil Wayne. I fully back Wayne’s response, including the asking of his name to a third party like he’s at Staples and about to report him to the manager.

Ross: Did you perform at the Virgin Mobile Music Fest in 2008 with Kanye West?
Wayne: I don’t know, but I know I did perform at this bad-ass bitch birthday party recently. She was crazy, stupid thick.

AT FAULT: Lil Wayne. This is just rude. Wayne, you know this wasn’t what he was referring to. Not once did he inquire about said woman’s thickness. Not once.

Ha, that’s such a bad sentence. “Isn’t it something that I would remember that?” That’s amazing. Sorry.

Wait a minute, the mysterious third party is a judge? That’s great — I just assumed it was Tyga. OK, keep going.

Judge: Do your best, try to answer it.
Wayne: [Laughs] Yeah, it’s something outta your ass. That’s my answer.
Ross: Ye—
Wayne: Yeah, it is something. Out. Of. Your. Ass.

Unlike the previous two, this is less an issue of fault and more a landslide victory for Lil Wayne. This guy David Ross just got served. Not only did Wayne take his question and completely confuse Ross (and the rest of us) by simply repeating it slower, but then he got the judge on his side and (last but not least) told Ross that the memory he was attempting to help Wayne conjure up was in his booty. That’s the right amount of childish and amazing. Step it up, Ross. The guy who made “How to Love” is beating you at your own game.

One of the cardinal rules of being rich and famous is you’re never supposed to outright talk about how rich and famous you are. Sure, there’s the opulence of the stage persona, but offscreen you’re supposed to have some humility about yourself. So yes, even in this situation when Ross lobs yet another silly question Wayne’s way, the fact that he answered à la Celine or Mariah, circa Divas Live ’99, puts the blame in this exchange in his lap. Wayne as diva is something no one should root for. It’s horrible.

Wayne wins. What a brat. Related: This might be the worst six-line exchange in human history. The level to which Wayne is ducking this question is admirable. It’s like rooting for the villain in a film. I almost want him to best attorney Ross at this point; this is Wayne’s Frank Lucas moment. BOB AND WEEEZ, DWAYNE. BOB AND WEEEZ.

Ross: Well, what image are you portraying in the media?
Wayne: I don’t portray anything, I am who I am and you guys portray what you get.
Ross: No, who are you? Who is the real —
Wayne: I am Dwayne Michael Carter Jr.
Ross: OK … Do you like to portray yourself as —
Wayne: I just answered that and said I don’t like to portray myself as nobody.
Judge: He’s answered the question.
Wayne: I’m Dwayne Michael Carter Jr. I don’t portray myself as anything. An image is self-described.

Note: Don’t think, for a second, that “an image is self-described” means anything. Those are just five words thrown together. Nothing more. OK, proceed.

That entire lengthy round of conversation just became meaningless, seeing as that Wayne abruptly ended the conversation by threatening a lawyer. And by “threatened a lawyer,” know that I mean “gave the birdcall to every Blood within a 50-mile radius.” Short-term, this teaches Ross to not get sassy at Wayne ever again, but long-term this will probably result in more jail time for Lil Wayne. Going to call this one a draw. This just went from a struggle between a pushover substitute teacher and a stubborn class clown to said troublemaker growing up to become a bad, bad man, essentially telling his once-superior to “watch his back” the second he steps outside this room. There isn’t anything cool about this. I’m going to give Ross three points, just because.

But there’s more. There’s this:

Wayne: He can’t save you.
Ross: And what does that mean?
Wayne: “I was talking to myself.”

Let’s be real: Who hasn’t alluded to another man’s demise aloud, by accident? That’s as common as losing your keys, right? Right?

Ross: Do you recall that any criminal actions were pending against you at the end of 2008?
Wayne: I don’t recall any.

Ross: Do you recall being at all concerned about any criminal actions that might have been pending against you at the end of 2008?
Wayne: I don’t recall.

Really, Wayne, because I seem to remem —

Ross: Do you recall that in the summer of 2007 you were arrested in New York City following a performance at the Beacon Theatre?
Wayne: I don’t recall that.

Wait, why do I have all these “Free Weezy” tees hanging in my clos—

Ross: Didn’t you serve about eight months in Rikers Island in 2010?
Wayne: I don’t know.

So here’s the thing:

“But we been fucking way before I went to Rikers Island” — Lil Wayne, “Turn on the Lights (Remix)”

To his defense, this deposition was three months ago and this song came out last week. Maybe he has since been freed of his amnesia?

Ross: Do you remember being arrested in or about 2008 near Yuma, Arizona?
Wayne: No, I don’t remember that.

OK, I actually believe this one. He was probably in the desert for Burning Man. You can’t possibly hold him responsible for remembering that. POINT: WAYNE

OK, even I’m beginning to grow tired of this dude David Ross. He needs to chill. The guy keeps asking him if he remembers getting arrested for drugs when he was probably on drugs. Of course he doesn’t remember; give it a rest. I’m taking away 100 points. Ohhhhh. It was Wayne’s “psychic” this entire time. I was wondering why he was so out of character. The whole clip, I’m sitting here thinking, Is this Lil Wayne being questioned, or is this Lil Wayne’s psychic? Now I know. That clears up a lot.