The Glorious Return of Totes McGotes 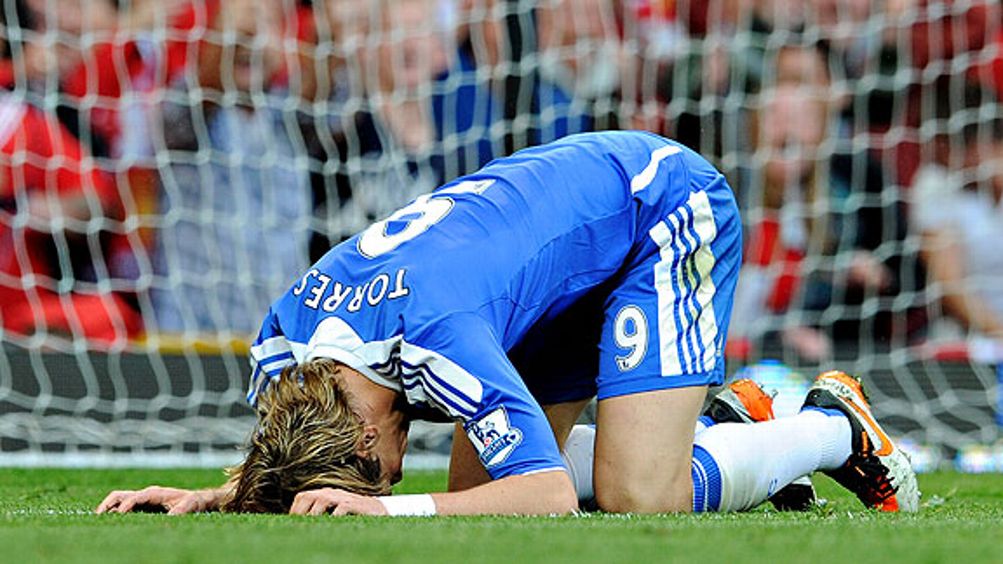 European football is full of rich rivalries dripping with history, where you can feel the cumulative stories of the respective clubs colliding with one another on the pitch when the referee whistles for kickoff. It’s a place where the air smells like meat pies, stale lager, the breath of thousands of singing fans, and the weight of everything that has come before and everything that will come after. These are the matches where something far greater than three points and position in a league table is up for grabs.

Which is actually kind of surprising, since the one hallmark of this “rivalry” is human error. Watching Chelsea and Manchester United, you feel like you’re waiting for something to go wrong rather than anticipating something going right. Perhaps that’s a residue left over from Chelsea captain John Terry’s infamous penalty shot pratfall during the 2009 2008 Champions League final in Moscow, effectively giving the European Cup to United. You want blood and thunder, but what you get is some of the greatest athletes in the world trying not to slip in the rain.

Sunday’s match was no different. There’s a pretty decent chance you have already watched, looked away in embarrassment and then rewatched Chelsea striker Fernando Torres’ miss heard ’round the world, by now. If you haven’t it’s at the 2:00 mark of the above highlight.

Following the game, which saw Torres score his first Premier League goal of the season and set up Ramires for an easy finish that the Brazilian promptly flubbed, you couldn’t help but feel for the man once nicknamed El Nino, as well as look for bright spots in his Apocalyptically dark day. Torres does indeed look a bit better now than he did in the second half of last season. And he does certainly seem to be developing an on-field relationship with his fellow Spaniard, Juan Mata, one that could prove to be quite fruitful once he starts reacquainting himself with the back of the net.

But it feels totally insane to even be writing those words — those “Hey, good job, you’re almost there, buddy” words — about a player who was quite clearly the top striker in European football just two seasons ago. And it must feel equally insane for Chelsea players to have to say things like what Petr Cech said after Sunday’s match: “I keep saying the same thing: I can see every time the guy is improving.”

The craziest thing is that, while Torres’ form was dipping towards the end of his stay at Liverpool, everyone thought it was due to both being unhappy at a club whose ownership was unstable and a nagging injury. Nobody thought this was a terrible buy — in fact, The Reducer thought it had an almost cutthroat logic.

Here’s what I mean: Following the Baltimore Ravens’ Week 1 stomping of the Pittsburgh Steelers, Ravens linebacker Terrell Suggs said of Steelers quarterback Ben Roethlisberger, “His soul may belong to God, but his ass belongs to me.”1 This, in a roundabout way, would seem to be the rationale behind Chelsea’s £50 million purchase of Torres this past January. Because, for at least a few seasons, Torres had a nice little needlepoint of United center back Nemanja Vidic hanging in his smoking parlor that said that exact thing. The Spanish striker had two mortgages taken out on Vidic. He was thinking of putting an extension on the two-car garage he had built on Vidic. He owned Nemanja Vidic. If the season came to down to Chelsea versus United, and Vidic versus Torres, you’d bet on El Nino. Paying £50 million for Torres could turn out to be a bargain.

Now it looks like one of the great transfer flops of all time; the second such catastrophe featuring Chelsea owner Roman Abramovich’s fingerprints (the first being his signing of Ukrainian striker Andriy Shevchenko).

Torres, compared to what football fans know he is capable of, is playing like a pile of hot garbage left out in the sun all July during a sanitation-worker strike. But he’s also a victim of circumstance. This is a Chelsea team that, in terms of on-field tactics and personnel, has been in a state of upheaval since the end of the Carlo Ancelotti era. And the inability to figure out what to do with the striker threesome of Torres, Nicolas Anelka, and Didier Drogba was one of the reasons for Ancelotti’s exit. And it is a problem that Andre Villas-Boas has inherited.

In the second half of Sunday’s match, a game that was a bit closer than the final score line suggests, a quicker, brighter, if defensively naïve, Chelsea showed its head. It was a team dominated by Iberian-schooled players: Portuguese midfielder Raul Meireles in screening for the back four; Ramieres, who made a name for himself at Benfica; Mata, who recently arrived from Valencia, playing creatively in the center of the park; and Torres leading the line.

To make this new side a power, Villas-Boas has to exhibit enough willpower to leave out fan favorites such as Frank Lampard (who sadly looks past it, at 33) and Drogba (who simply cannot play at the same time as Torres) and seize on this new identity. And to do that, he needs to get Torres firing again. Until then, Torres can find comfort in the unlikeliest of places: the notoriously fractured Chelsea changing room. After all, who else in the world can identify with him in the same way that John Terry can?

Not So Up for the Cup

This past February, Arsenal lost to Birmingham in the Carling Cup final in a fashion that could best be compared to Magua’s ripping out Col. Munro’s heart in The Last of the Mohicans. And you could say Arsenal still hasn’t recovered. Usually, the Gunners had looked at the Carling Cup, which is traditionally the secondary domestic trophy to the much more storied FA Cup, as a proving ground for their seemingly endless line of young talent. But last season, in search of a trophy to prove that you can, indeed, win with kids, manager Arsene Wenger took the competition more seriously, getting all the way to the final.

Here’s the question: Is losing a final, especially in such an outrageous fashion, more painful than the joy attendant with getting to the final in the first place? This season Wenger is back to fielding a Carling Cup team featuring kids, such as Alex Oxlade-Chamberlain and Ryo Miyaichi. At least he’s bothering at all. Some Premier League and Championship managers look at the Carling Cup not as a chance to get some glory, but as a distraction from the business of improving their league position.

A few weeks ago, Queens Park Rangers boss Neil Warnock seemed positively relieved to be out of the Carling Cup after losing to League One side Rochdale, saying, “I’m not disappointed to be out. The competition is not a priority for us. If I can’t get motivated for the competition, I can’t blame the players if they can’t.” Easy on the clear-eyes-full-hearts there, Coach Taylor.

While Spurs have certainly looked far better since the transfer window closed, keeping Luka Modric and adding striker Emmanuel Adebayor and midfield grown-up Scott Parker, Harry Redknapp hasn’t stopped undermining club chairman Daniel Levy with little comments to his pals on Fleet Street. Take this nugget, regarding Modric’s salary: “You can’t say he is worth £40M and want to pay him the wages of someone who is worth £5M. That doesn’t ring true does it?” That noise you hear is the sound of Levy bursting blood vessels and saying, “S … T. … F … U.” through clenched teeth. But after watching this snapshot from the Croatian, albeit against a depleted Liverpool, you’d have to agree with Redknapp’s valuation, much as it may pain Levy to hear it.

The Wolves boss makes a triumphant return to Quote of the Week with this nugget, uttered in response to Queens Park Rangers’ Chatty Cathy, Joey Barton, claiming that nemesis (and Wolves midfielder) Karl Henry was nothing but a “Sunday league player.” Take it away, Mick: “Not unless Wolves are in the Dog and Duck League! He is a Premier League player.” My only response to that is this: