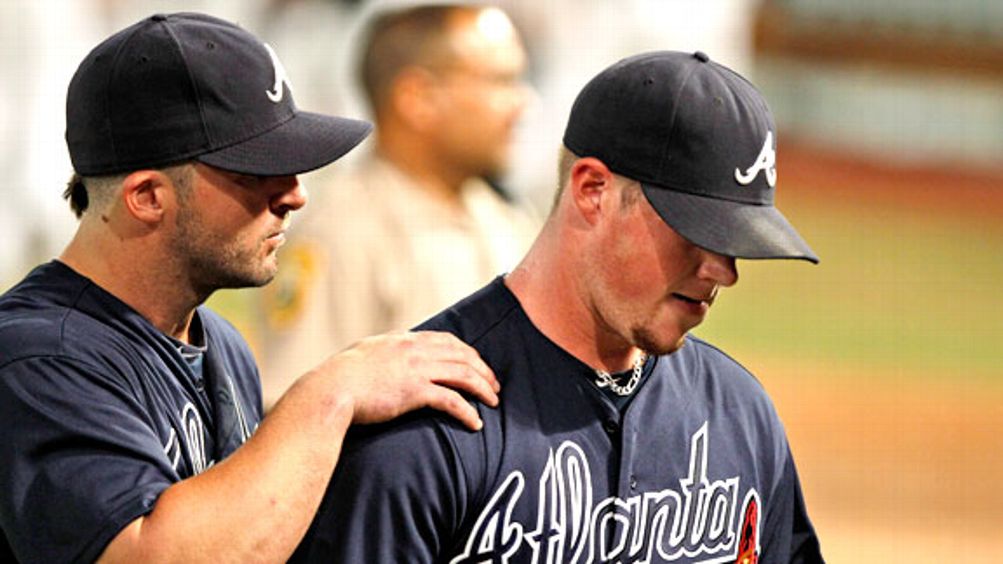 Craig Kimbrel couldn’t get that last strike. He’d put together one of the most dominant seasons ever seen by a closer, in his rookie season no less. But facing Omar Infante, one of the least scary home run threats in the game, Kimbrel’s two-strike one-ball pitch caught too much of the plate, and Infante whacked it for a walk-off, two-run homer. Just like that, in a year that looked like it’d be a dud for playoff races, we have two panic situations.

Just 16 days ago, the Braves led the Cardinals by 8½ and the Giants by 9½ games in the wild-card race. That deficit has been slashed to 2½ over St. Louis and 3½ over San Francisco. Like the Red Sox, the Braves have an easy schedule to close out the season, giving them what should be a clear path to the postseason. Also like the Red Sox, they’re playing so poorly that winnable games might not be won.1 With Boston, the reasons for falling to the verge of collapse are obvious: The team that leads the American League in runs scored this month, with five triple-digit totals, has gone 5-13 thanks to a starting rotation that can best be described as, “Are you f-ing kidding me?!?!?” The Braves’ problems are a little more complicated.

Fingers are starting to point toward the bullpen. That’s a shocking development given how dominant the Braves’ top relievers have been this year, but September’s been a tougher task. Infante’s blast marked the second straight game in which Kimbrel had yielded a home run after surrendering just one in his first 75 games of the season. His flame-throwing rookie sidekick Jonny Venters has walked almost eight batters per nine innings this month. We know that anything can happen over a 19-day stretch. But manager Fredi Gonzalez has been extremely rigid in his bullpen usage, even more than the formulaic norm followed by MLB’s 29 other skippers. If the Braves get a lead, he’s going to Venters in the eighth and Kimbrel in the ninth, and nothing’s going to stop him. The result has been a reliever-appearances leaderboard that has Venters on top, Kimbrel tied for second, and lights-out setup man Eric O’Flaherty tied for fourth. The Braves do have something of a tradition for working their relievers hard: Four Bobby Cox-managed pitchers pitched in 75-plus games in 2009, all four ranking in the top 10 that year for appearances. Still, Gonzalez has taken it to the next level.

Determining cause and effect in these situations is next to impossible. Kimbrel and Venters are still posting gigantic strikeout rates with radar gun-busting velocity. They’re young, healthy pitchers who should theoretically have the resilience to carry their team through a rigorous season. But hedging a bit probably would have made sense. If the Braves do hang on, make the playoffs, then make a deep run, Venters will probably top 100 appearances for the year, and Kimbrel will be close. With most other teams, you can treat relievers as fungible commodities, knowing their performance is unpredictable and that someone else will soon come along. You also don’t overreact to a little rough patch. But the Braves stand alone in having two bullpen arms who are also vital parts of their future.2 Hopefully Gonzalez’s heavy usage of his star relievers doesn’t cause problems down the road, or even in the next eight to 27 games.

With that aggressive reliever usage, it’s no surprise to find the Braves ranked 20th in innings pitched per start, tied with, among others, the decimated Red Sox. Look at the Braves’ Opening Day rotation, and that outcome seems shocking. Atlanta trotted out two veteran workhorses in Tim Hudson and Derek Lowe, an emerging ace in Tommy Hanson, a very good midrotation arm in Jair Jurrjens, plus a promising rookie in Brandon Beachy. All four have posted FIPs below 4.00. But the young guys have struggled with injuries. Beachy missed nearly six weeks in May and June, while Hanson and Jurrjens remain out, having made just 45 starts between them all year. No team oozes young pitching depth more than the Braves, with top prospects Mike Minor, Randall Delgado, and Julio Teheran all making starts this year, and Arodys Vizcaino standing by. But if a team might have a small tinge of concern about overworking its star rookie relievers, it would have a much bigger concern about burning out the future pillars of its rotation, and limit their innings accordingly. The bigger issue right now is Lowe, who’s been whacked for 17 runs in the past 13.1 innings. The Braves are holding out hope that Hanson can start the final game of the season next week against the Phillies. But the bottom line is that a rotation that was supposed to be great has been merely good.

Which is a big problem when your offense isn’t very good. The Braves rank 19th in runs scored, with multiple players putting up disappointing seasons. Jason Heyward’s getting creamed by an 80-point drop in his batting average on balls in play (.255 this year, .335 last year), and Gonzalez’s misplaced affection for Jose Constanza over Heyward hasn’t helped.3 Martin Prado is the baseball equivalent of a Bad Quarterback League star, posting a terrible .301 wOBA while playing left field, a position that demands a lot more offense. Dan Uggla is having one of the worst 35-homer seasons in MLB history, needing a massive surge in the past couple of months just to get his on-base percentage above .300. And Alex Gonzalez has been an offensive zero, hitting .238, walking less often than any other player save for Yuniesky Betancourt, Vladimir Guerrero, and Darwin Barney, and posting a season line just above replacement level.

Add it all up, and maybe we shouldn’t be so surprised that the Braves are hanging on by their fingernails: Based on their runs scored and runs allowed totals, the team’s expected record is 83-71, four games worse than its actual record of 87-67.

The Braves’ wild-card rivals have expedited the process. The Giants were in first place as recently as August 9 before their NL-worst offense caught up to them, and the Diamondbacks seized control of the NL West. The bats have heated up lately, with the Giants averaging more than seven runs per game during their current eight-game winning streak.4

The Cardinals, though, are the bigger threat. They’re a game closer, for one thing, and like the Braves, the Cards have an easy schedule ahead of them, with three-game sets at home against the Mets and Cubs and three at woeful Houston. They’re also a stronger team, with three elite hitters in Albert Pujols, Matt Holliday, and Lance Berkman, a deep starting rotation led by reliable mainstay Chris Carpenter, and a much-improved bullpen that’s quietly paid big dividends in the past two months. Jason Motte deserves a lot of the credit for the bullpen’s surge, wresting the closer role from Fernando Salas and performing admirably, with a strikeout-to-walk ratio of better than 4:1 for the year and just two homers allowed in 64.2 innings.

But let’s save some kudos for Cardinals GM John Mozeliak. He got roasted for trading Colby Rasmus at the deadline, with critics (rightly) wondering how a team could give up on a tools-laden, 24-year-old center fielder in exchange for a rental starting pitcher and some relievers. You can debate whether it made sense to cut ties with Rasmus over a personality conflict, or how this trade might play out in the next three years. But the Cardinals definitely improved this season, the trade playing a significant role in the team’s late-season charge. Edwin Jackson has settled in as a capable midrotation starter (4.06 FIP in St. Louis), bumping Kyle McClellan to the ‘pen. The relievers the Cards acquired have been outstanding: Octavio Dotel’s posted a strikeout-to-walk rate near 5:1, and lefty Marc Rzepczynski has flashed a K rate better than 11 per 9 innings, offering a glimpse of the upside Mozeliak hoped to get. The bullpen’s boost is compounded by some serious addition by subtraction. Trever Miller, P.J. Walters, and Brian Tallet were all terrible, pitching below replacement level. Add in Jon Jay’s continued production in Rasmus’ center-field stead and you could argue that the Cardinals have gained about three wins from the Rasmus deal, no small feat in less than two months’ time.

All of which means we now have two compelling races to enjoy where none existed just a couple of weeks ago. Or, if you’re a Red Sox or Braves fan, two serious ulcers.

Previously from Jonah Keri:
Can the Rays’ Surge Top the Red Sox Collapse?
How Television Could Launch a Rangers Dynasty

How Do the Angels Keep Winning?
The Road Map for a Cubs Resurgence
Six Teams You Don’t Want to Face in the Playoffs