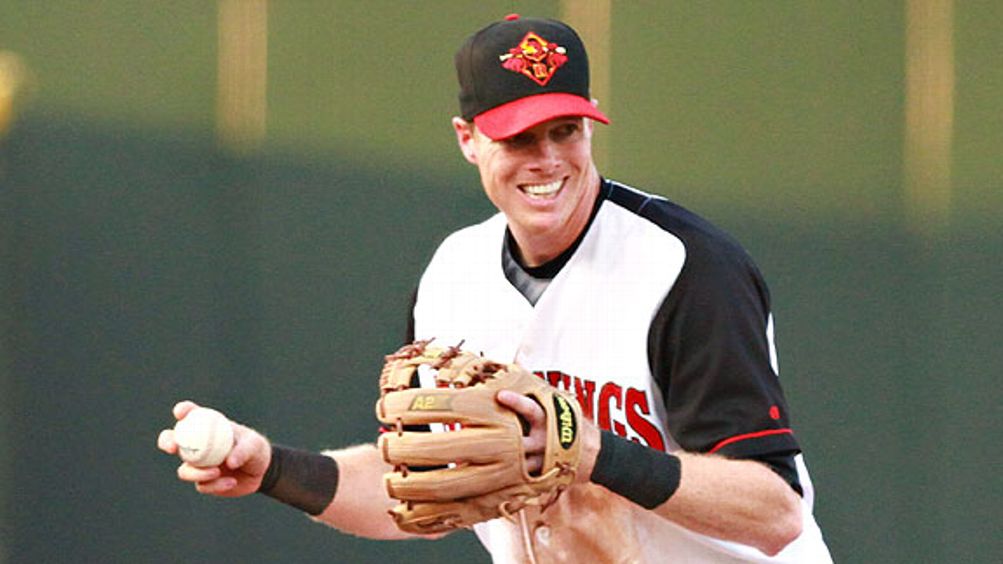 He woke up on Labor Day in Room 228 of a thin-carpet Comfort Inn in Rhode Island. The hot water didn’t work. He went out to the parking lot and got on a white bus that took him past an orange sign that said ROAD WORK AHEAD and to a small, concrete ballpark in Pawtucket.

At McCoy Stadium, inside the visitors’ clubhouse, his name was written in the lineup on a dry-erase board, playing third, batting sixth. He ate a bagel and two creatine pills, then put on the road-gray uniform of the Rochester Red Wings, the Minnesota Twins’ Triple-A team.

He’s played in Brooklyn, Port St. Lucie, Binghamton, Norfolk, Zebulon, N.C., Albuquerque, Japan, Syracuse, and now Rochester. He’s played in more than 1,000 games. He’s been up to bat more than 4,000 times. He’s been an All-Star in Class A, in Double-A, in Triple-A. He’s never made it to the major leagues. He turned 32 in July.

He walked out of the clubhouse and through the tunnel to the dugout and onto the field to stretch. He jogged to a spot in shallow center and knelt in the grass and said a short prayer. This was how he started the last day of his 10th season in professional baseball.

The way baseball picks its best players is ruthless and authentic. The minors are a long shot in a short window. Nobody makes it to the majors on potential alone. Every player with a spot on a roster is some combination of talent, skill, luck, and timing. The higher draft picks generally have to play their way out. Chase had to play his way in.

He played at Cypress Falls High School in Houston, then Grayson County College in Texas, then the University of Texas, then the University of Louisiana at Lafayette, and the Mets drafted him in the 34th round of the 2002 draft, the 1,017th pick overall. They sent him to the short-season Class A Cyclones in Brooklyn. His signing bonus was a thousand bucks, his salary was $700 a month, and the manager called him “blond-haired guy.”

He played for the full-season Class A St. Lucie Mets in 2003 and helped them win the Florida State League title. He played second and David Wright played third, and they were both All-Stars.

He played for the Double-A Binghamton Mets in 2004. The local paper called him Mr. Clutch. His mother came to visit, and he told her over lunch, I love this. I’ll do this for as long as they’ll let me. He met the woman who later would become his wife and the mother of his son.

He got called up to Triple-A Norfolk in 2005. He homered three times in the first game of a doubleheader, and then went 2-for-4 in the second. He finished the year with a .309 average and 24 home runs.

“This game is humbling,” he said to a reporter in Norfolk. “You’re a fool if you ever think you’ve got it figured out.”

He was sent back to Binghamton that July.

He was released the following spring.

Since then, he’s been a Carolina Mudcat, an Albuquerque Isotope, a Chiba Lotte Marine in Japan, a Syracuse Chief, and now a Rochester Red Wing. He’s led the Double-A Southern League in extra-base hits. He’s been the MVP of the Triple-A All-Star Game. He’s made more than $300,000 in a year, in Japan, but here at home the most he’s ever made is $12,000 a month, and for five months of the year. Here, though, the majors are a phone call away. He’s worked his way back to Rochester to hear the siren song of so damn close.

On Saturday of Labor Day weekend, before the Red Wings’ last home game of the season, Chase had sat on a metal chair in the clubhouse with the leaky ceiling, drip, drip, and talked about how he was “right there.”

He said: “I think I’m grateful for what I have and not bitter about what I don’t have.”

And he said: “I’ve never played to make it to the big leagues. I’ve played to play well.”

Chase can play every position in the infield. He can play the outfield. He switch-hits.

“I don’t think he takes for granted how hard it is to make it to the major leagues,” said his wife, Sara. And he doesn’t. He knows.

After Saturday’s game, before the trip to Pawtucket, a pitcher named Kyle Waldrop got called up, and for the first time. He never lost a game in high school, where he had an ERA of 0.20, and he was a first-round pick. It took him seven seasons to make it.

Chase walked over to shake his hand.

Then he walked outside with Sara, just about due to give birth to the boy they’re going to call “Champ,” and he kissed her goodbye. It was after 11:30 p.m. The Red Wings were nearly 40 games under .500. The sky was black except for the lights in the stadium where the wall in left center said TWINS OF TOMORROW. But not of today. At least not for Chase. So Sara drove home, and Chase got on the team bus, headed to New England, seven hours on the road, 389 miles overnight.

He’s been aware of the end since before the beginning.

After the last game of his college career, a loss in the NCAA regionals against Louisiana State in Baton Rouge, Chase stood outside the stadium with tears in his eyes. I don’t want to get on the bus, he told his parents. Getting on the bus means it’s over. He was drafted four days later, on the last day of the last draft in which he was eligible. When the Mets released him, in ’07, he had thoughts about what might be next; when he came back from Japan, in ’09, he didn’t sign with a team until January, just before spring training, and he thought maybe this was it …

… but this trip to Pawtucket?

“I’m optimistic,” he said. “You’re never 100 percent sure. But I have a good feeling. Some team out there needs a guy like me.”

At McCoy, his best friend on the Red Wings, Aaron Bates, sounded almost angry: “There is no way he shouldn’t have had a chance already.”

On the phone, from Oklahoma, his coach at Grayson, Tim Tadlock, sounded cornpone pragmatic: “Part of that is being on the right team.”

And on the phone, from Texas, his mother, Wanda Lambin, sounded … like a mother: “I wish they’d give him a chance.”

Pawtucket is close to Boston, but it’s not that close, and in between innings these Red Sox play on the scoreboard the game being played by those Red Sox. It’s entertainment for the fans. It’s a reminder for the players. Still here.

In Sunday’s game, Chase tripled in the fourth, and in the ninth he came up with a chance to tie the game. The Red Wings were down one. There was one out and a man on first. Batting righty against a lefty pitcher, he sliced a wicked drive down the line, in the direction of the corner in right. Double? Triple? Tie game? The Pawtucket first baseman lunged to spear the ball out of the air and stepped on the base. Double play.

He had hit it hard, really hard, and all of a sudden it was over. The end came quick.

In Monday’s game, Chase tapped back to the pitcher in the second, flew out to left in the fourth, and grounded to second in the seventh. His average landed at .274. He was up fourth in the ninth. The Red Wings went 1-2-3.

He was left on deck.

After the game, the last game, season over, “All she wrote, in the books, can’t change it,” Chase said. He took off his uniform and sat in front of his locker back in the clubhouse wearing white spandex shorts. Guys threw their dirty jerseys and pants in a big bag on the floor in the middle of the room. They ate chicken and lasagna and said not a lot. Chase was alone and read a text message from Sara. She was so proud. Please hurry back.

He took his time to type his response.

I love yall so much. I’ll be home soon.

He flipped his phone shut. The engine of the bus was running outside.

Previously from Michael Kruse:
How Does Oregon Football Keep Winning?