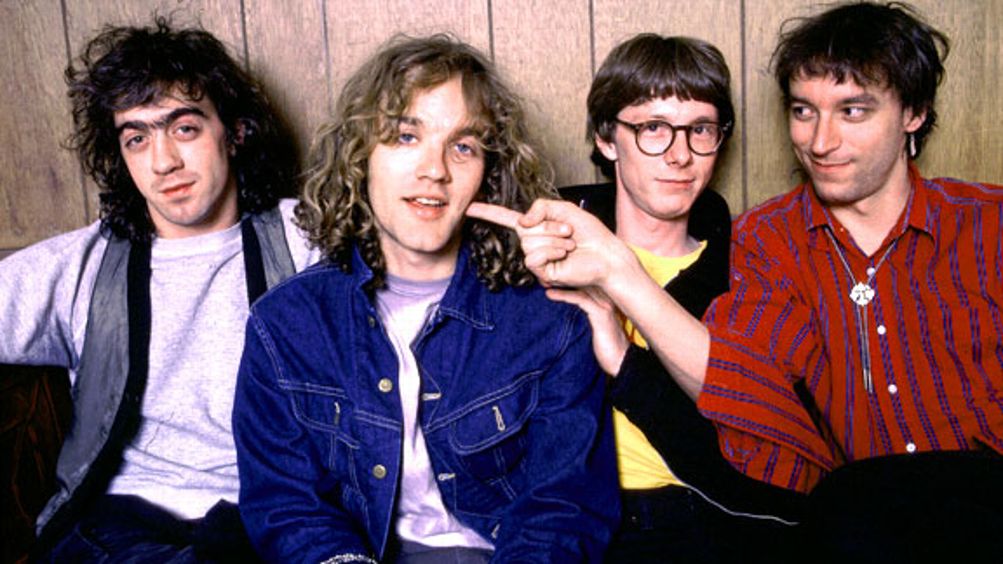 It’s like the bald man said: bad day. At least for some of us. I know there are those among you who never got it or didn’t care or were too young or too dumb to bother. I know there are many reasonable people collecting paychecks and raising children in this very America for whom “Everybody Hurts” or “Shiny Happy People” can exist only in the space where Wimpiness and Pussiness get together to do unspeakable things to each other on grandma’s favorite quilted duvet.

But trust a bitter, old, forever-youngish, middle-aged man for a second: To a certain kind of person (white, relatively privileged, vaguely annoying) living through a certain kind of ’80s (white, relatively privileged, vaguely annoying), R.E.M. was the gateway band — the gateway to the cooler bands, to bigger ideas, better politics, to culture itself, the way to slip out of something and into something else. Of course, today everything’s free and wide-open and no one needs gateways to anything. This isn’t the place for one more howitzer round of boo-hoos about how much better it was way back when we had to walk through miles of driven snow and knee-high cigarette butts just to buy an Embarrassment record, when the only way to get the word on new, hot bands was by consulting wizards who lived under bridges and spoke only in riddles through the hair draped over their far-away eyes. But put yourself in that Precambrian mindset just for a second. Or better yet, let 1986 Michael Stipe — The Wizard King himself — do it for you:

MTV: What do you think of the media?

Stipe [sitting on a porch in Athens, Ga.]: “I don’t own a TV set, I don’t read the newspaper, I don’t own a radio. Any information I get about world events I get from other people [pulls hands toward self in gathering gesture to signify people coming toward him, as if harvesting souls].”

As a newsgathering resource, this method had its limitations. But it was a nice way to make friends and influence people. The term future anthropologists will use for this process is “word of mouth.” [Cue Robert Plant voice from the film The Song Remains the Same]: Does anyone remember word of mouth?

That’s how the Former Biggest Band in America got built. R.E.M. began as a rumor (’80-’82). Then they were a rumble (’83-’86). Then they were the bright, new national noise (’87-’96). Then there was a decline (’97-’07). Then a soft rebirth (’08-’11). And now they’ve seen that great and golden exit sign everyone from Bush to Toto finds a way to ignore even though it’s slamming them in the forehead, and they’ve taken the high road of early golf and 3 p.m. mint juleps. And probably reunions. Today, they’re in Venerable Band Heaven, where the guys in Faster Pussycat are bringing them drinks and calling them “mister.”

Peter Buck always enjoyed saying that when R.E.M. broke up he wanted to be able to look back and know he hadn’t done anything to embarrass himself. A couple of British Airways flight attendants might have something to say about that. But you have to admit it: 31 years on the job and a career arc like one of those lush, green, softly sloping hills drawn in children’s books. They built their fame on their own terms, and lost it that way, too, in a process that seems almost geologic in 2011.

Thirty-one years is a nice, weird, meaninglessly evocative number, and also a prime number; it’s obscure and irreducible, just like a lot of their best songs — be it “Wolves, Lower” or “Ages of You” or “Harborcoat” or “Finest Worksong” or “Losing My Religion,” or “New Test Leper” or “Imitation of Life” or “Überlin” or everything on Murmur or everything on Automatic for the People. But it’s also appropriate. Had they split as recently as four years ago, “break up” would’ve seemed too strong a word. People were forgetting they were even around. But now, after 2008’s Accelerate and this year’s Collapse Into Now — records that revisit old dreams without trying to relive old glories — calling it quits proves once again their vaunted discretion and good taste.

Good taste is kind of an odd engine for worldwide pop appeal, but with a little goofiness thrown in there (see: “Stand”), that’s how they did it. Sure, Stipe had his overweening enthusiasm for bold-faced names and Mike Mills had his unfortunate fling with Nudie suits and, hi, Peter Buck’s mid-’80s black vests (actually, those have kind of aged OK). But no transgression could ever really shake their air of propriety. They always managed to convince you they wanted it less than they actually did — an almost un-findable stance today. Murmur, 1983’s masterpiece, got to no. 36 on the Thriller-era Billboard charts, and they played RFK and Shea while opening for the Police, and yet Buck could always reasonably maintain well into their fame years that they were “the acceptable edge of the unacceptable stuff” rather than vice versa. As marketing, it was genius. People who loved contorting themselves in weird directions, looking for ways to prove (to no one in particular) how “appalled” they were by the “decadence” of the “Reagan ’80s,” found such studied sheepiness irresistible. Who else would land a top-10 album (1987’s Document) then take pains to remind everyone how long they’d struggled to earn it by calling their big cash-in tour the WORK Tour: Yeah! Woo-Hoo! Work! Fuck Motley Crue and their fun tours! I’m gonna spend my $14.95 to go hear some blurry folk-rock jams about the dark side of U.S. policy in Latin America over at the Work Tour!

In retrospect, this seems like a much weirder thing to do with your ’80s than dress like Jim McMahon and listen to Cinderella, or pronounce Duran with a “j.” But it turned out to be the way a lot of people wanted to spend their ’90s, when even in deeply annoying moments, like the famous Stipe VMA’s strip-tease of 1991, they reigned as Nirvana’s not-as-rocking weird uncles (Kurt Cobain famously had Automatic for the People on the stereo the day he killed himself). For a while it seemed like they’d just be giant rock stars forever, in that resilient integrity-swilling way Neil Young is, only bigger. But the brain aneurism that sidelined drummer Bill Berry in 1995 removed their musical motor and seriously waylaid their recording greatness. History may reclaim 2001’s Reveal, but I bet Stipe himself can’t even name more than three songs on 1998’s Up. In a sense, R.E.M. were living only as legacy long before they made it official on Tuesday.

And that’s fitting, too. Their songs obsessed over the distance between reality and memory, action and perception, reveling in disconnect and blur: “Fast songs that made you think slow,” as critic Ann Powers observed. Musically, their trick bag was never that big: a blammo shake-it-up beat, some sleek, off-handed guitar sex, lyrics that balanced drift and foreboding, all coiled tight then finally unfurling into a chorus of the gods. They had their gimmick like anyone else. But they blew the shtick up in a thousand directions: whether it was making a concept album about Reconstruction that’s really mainly about Michael Stipe’s love life (1985’s Fables of the Reconstruction), or building a parallel between the images of Christ and Marc Bolan on 1996’s New Adventures in Hi-Fi, or putting KRS-One and Kate Pierson of the B-52’s on the same record (1991’s Out of Time), or making a bubblegum tune from a Douglas Sirk movie title (2001’s “Imitation of Life”) or working references to Lenny Bruce and Lester Bangs into an unlikely radio hit (“It’s The End of the World As We Know It (And I Feel Fine)”). They were really quite something, as Former Biggest Bands in America go. And now they’re gone. Oh well, it’s like that radio hit said: birthday party cheesecake, jelly beans, BOOM! Thanks, fellas.