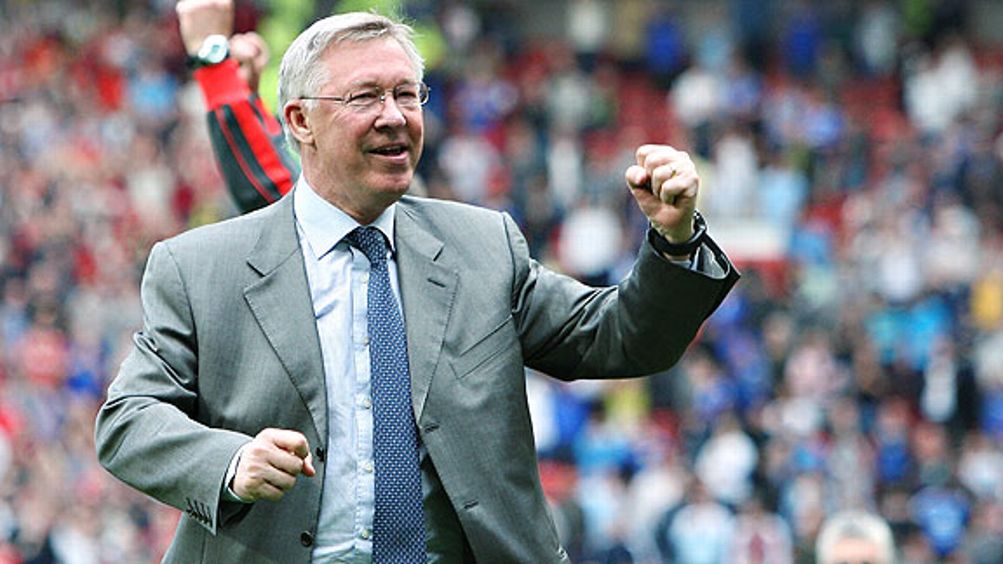 If you’re not a Manchester United fan, it’s pretty easy to not like Sir Alex Ferguson. He bends time to his own will, he is the greatest deliverer of subliminal disses who’s not named Christopher Wallace, and he drove Rafa Benitez out of his mind. But anyone who watched United dismantle Tottenham 3-0 on Monday — even Ferguson’s most passionate detractors — must have given him a hearty Charles Foster Kane clap.

At the end of last season, every other team in Europe, bar Barcelona, would have traded places with Ferguson’s United. It had just won its 12th Premier League title (19 total English top-division crowns) and had finished as runner up in the Champions League (*waves white flag at Barca*). Ferguson, 69, could have kept his team largely the same, signed a big-name player like Wesley Sneijder, and still seen out the twilight of his career in comfort and prestige, leaving the future of the club as an issue for the next manager to deal with.

Instead he went back to the blueprint that got him the 12 Premier League titles in the first place, injecting an aging team with youth and athleticism. The median age of the team that took the field at Old Trafford on Monday was 23. It’s a move Ferguson has pulled before. Never one to be afraid of blooding young players, he famously turned over the side to Gary Neville, Ryan Giggs, and David Beckham in the early ’90s.

The football produced by this young 2011 team, featuring new signings Ashley Young and Phil Jones and academy players like Tom Cleverley and Danny Welbeck, was breathtaking. Nani and Young switched wings with abandon; Cleverley and Anderson traded roles in central midfield, allowing each to maraud forward; Wayne Rooney was played in his preferred position, behind the main striker; and the incredibly athletic Welbeck ran Tottenham’s thin defense ragged.

The reaction they produced from their manager was joyous: “This is what the club is all about. We have always had confidence to play young players, and this group has such fantastic ability it forces you to play them, really.” You might think Ferguson is a bit of an old bully, but he does love football. And nothing seems to give him more joy than seeing young players come into their own.

Watching Manchester United’s second goal — Rooney to Anderson, Anderson to Welbeck, Welbeck backheel to Anderson for the tap-in — it was easy to see why he gets such a kick out of it.

Off The Pitch: Best laid plans

Arsene Wenger had a plan. Unfortunately that plan is starting to feel alarmingly like, “Hey, guys. So, I’m thinking Little Big Horn for this Crazy Horse scrap. Thoughts?”

Here’s how this was going to go. In the 1990s, Wenger, broadly and hyperbolically speaking, introduced the ideas of beautiful, passing football and diets of fish and pasta to a footballing nation that was still “hoofing it up to the big man up top” and eating chips and drinking lager at halftime. His Arsenal teams won trophies and introduced us to the talents of Dennis Bergkamp, Patrick Vieira, and Thierry Henry.

For his next big trick, Wenger was going to turn his back on the increasingly topsy-turvy transfer market (with one of his classic “I did not see it” moments) and invest in youth, bringing players along slowly, carefully, and educated in the Arsenal style of play.

When those players had matured they would (a) be world-beaters, (b) seduce die-hard fans and neutrals alike with their sumptuous football, and (c) show loyalty to the club that had nurtured their careers since their teenage years.

This was all going to take place in a huge, new, state-of-the-art stadium that Wenger himself had a large part in overseeing. The stadium would be full, and people would come from all over to see the kids kick. What could go wrong?

In the past few seasons, Arsenal has sold players such as Gael Clichy, Emmanuel Adebayor, and Kolo Toure to Man City. To be clear, Wenger let those players go. But Samir Nasri’s transfer to City on Tuesday marked the first time Wenger lost a player to Man City. Nasri joins an absolutely stacked City side, giving it yet more creativity to layer on top of its sturdy defensive backbone. If the idea of him teaming with David Silva, Sergio Aguero, Carlos Tevez, Adam Johnson, and Edin Dzeko sounds unfair, it’s because it kind of is.

Manchester City, and the huge amount of money being doled out on transfer fees and player wages by its owner, Sheikh Mansour, has altered the financial reality of the Premier League. It’s not a fair reality, it’s not a sustainable reality (at least one would think and hope), but it is reality. In Nasri’s case, he came to North London from Marseille with lots of potential. Wenger helped him become one of the brightest attacking midfielders in Europe, all while Nasri’s contract was winding down. Then Manchester City backed up the truck and blew Arsenal’s best contract renewal offer out of the water.

Wenger seems unwilling or unable to deal with this reality. The team he sent out on Saturday, which lost at home to Liverpool, was threadbare and frustrated. Despite decent performances from the likes of Emmanuel Frimpong (before he got sent off for flipping Lucas upside down), Wenger must change either his transfer philosophy1 or the way he sets up his team, tactically.2 The side that played on Saturday was built around recently departed captain and creative midfielder Cesc Fabregas. It must now be built to cope with his absence.

Losing Nasri and Fabregas creates a giant creative void in midfield. Arsenal failed in its attempt3 to buy Juan Mata and has been rebuffed by Everton with a low offer for defender Phil Jagielka. Even Wenger’s pipeline to French talent could be on the verge of drying up, with SI‘s Ben Lyttleton reporting of tension between the manager and the movers and shakers in his home country.

Last season, many felt that Arsenal was only a central defender away from the Premier League trophy. Only a few months later, it now seems inconceivable that any team outside of Manchester will win the league for the foreseeable future.

(Goal at :45) Here we have Manchester City midfielder Gareth Barry launching an outside-the-box-missile against the defenseless shores of Bolton in Manchester City’s 3-2 win on Saturday. Anytime a player scores by kicking a ball like it stole something from him, you will find nothing but appreciation and dap from The Reducer.

Quote Of The Week

Mick McCarthy, boss of Wolverhampton Wanderers, on the team’s bright start and kicking alphabetical racism out of football: “We start bottom of the table every season due to alphabetic order, so it’s nice to be where we are.”

Previously from Chris Ryan:
The Reducer, Week 1: Blue Kun
The Reducer: Premier League Preview
Anthony Gonzalez Has Something To Say About HGH and Limitless
The Neverending Story OR How Brett Almost Got His Groove Back
The Peyton Whisperer