It Wasn’t (Just) About the Money

The Third Day of NBA Christmas 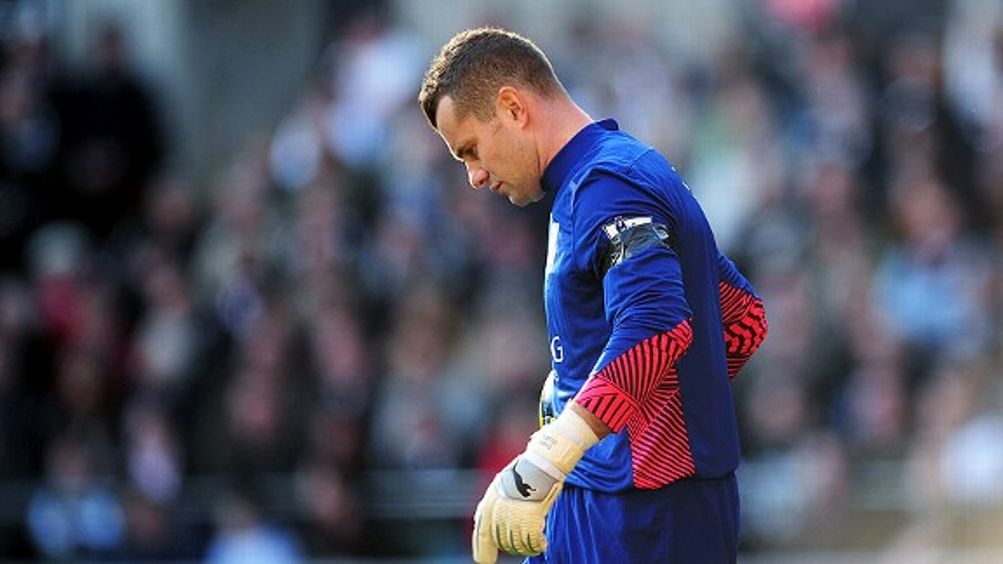 After a Saturday that saw Stoke and Chelsea recover from dips in form, Arsenal and Manchester United slip up, and Tottenham continue its fire-hazard win streak, a darkness descended on the Premier League.

Sunday morning, before the kickoffs of Liverpool versus Manchester City and Swansea versus Aston Villa, news broke that Gary Speed, a heroic figure in the recent history of British football and manager of the Wales national team, had been found dead in his home from an apparent suicide. He left behind a wife and two children.

Speed was a left-sided midfielder full of heart and industry. He played for several history-rich clubs including Everton, Newcastle, and Sheffield United. He was possibly best known as part of a classic, title-winning early-’90s Leeds United team, playing with the likes of Gary McAllister and Gordon Strachan. After retiring in in 2010 he went into management. Following a rocky start to his managerial career at Sheffield United, he oversaw something of a quiet revolution as the Wales national team manager, ushering along brilliant young talents such as Gareth Bale and Aaron Ramsey and guiding the team to a strong finish in their ultimately unsuccessful Euro 2012 qualifying campaign.

You didn’t have to know Speed as a man or even a footballer to see the profound effect his loss had on so many people. All day Sunday, tributes flooded into British papers, makeshift shrines were erected at Speed’s former clubs’ grounds, and sports talk radio was turned into a kind of public gathering for mourners.

Speed’s death was felt on the field as well. Liverpool winger and Welsh national team player Craig Bellamy, who knew Speed as a friend, teammate, and manager, was understandably devastated, leading Reds boss Kenny Dalglish to leave him off the roster when Liverpool faced league-leading City. “I took the decision for him, to say there are more important things than playing football,” said Dalglish before the game.

There have been eloquent and moving tributes written by Speed’s Leeds manager Howard Wilkinson and the BBC’s Dan Walker, while Match of the Day pundit and former Liverpool defender Alan Hansen offered a compelling piece about the problematic nature of English football’s celebration and reliance on resilience and what that can sometimes mask and The Score’s Richard Whittall investigated the fine line between sports and “real life.”

It’s incredibly hard to articulate loss, especially so soon after someone passes, especially when they do so under such traumatic and inexplicable circumstances. To know the impact Speed’s life and death had on those who knew him, you need only take one look at Aston Villa goalkeeper (and former Speed teammate) Shay Given’s face during a moment of silence for Speed before Villa vs. Swansea. He will be deeply missed.

Games of the Week

The Reducer, like most pilgrims, spent much of the end of last week freebasing stuffing and trying to decide if buying an Xbox 360 could be explained with simply saying “Treat Yo’ Self” into the mirror. So while this column felt like the football had a certain tryptophan-ish quality, that could very well be a personal projection.

If there was a storyline that jumped out from the on-field action, it came from the Northeast of England and Newcastle United’s refusal to go away.

It seems as if every season, a team makes a surprising pre-Christmas run, upsetting the assumed order of things and causing its fans to dream big of Barcelona coming to places like Hull and Blackpool on European nights. The comedown is usually as bad as the high was good, and these sides tend to drop to wherever their economic resources have them slotted.

Most footballing addicts, this one included, thought Newcastle’s season would, to invoke the new/old chestnut, regress to the mean over the next couple of weeks. The Magpies have had an incredible start to the 2011-12 campaign, holding down a top-four spot for much of it. They lost their unbeaten record to Manchester City on November 19, and many predicted another loss when they visited Old Trafford over the weekend. In all likelihood Newcastle would, over the next couple of weeks, get the memo and skulk back to the middle of the pack, making way for the traditional London and Northwestern powers to fight it out for Champions League spots and silverware.

Well, the Magpies never got that memo, or if they did, it was never translated into French. Alan Pardew’s men just don’t know any better. And the league is better for it.

You could see it when, early on in the match — one Newcastle ultimately drew, 1-1 — their brilliant no. 10, Hatem Ben Arfa, lost his shit on Wayne Rooney. The United forward had a kick at Newcastle captain Fabricio Coloccini while he was on the ground. It didn’t seem to bother Coloccini, but Ben Arfa came storming in, screaming at Rooney. It’s not surprising: Ben Arfa nearly had his career ended by a reckless Nigel de Jong tackle last season. But The Reducer was impressed just the same; Ben Arfa was standing up for his teammate, and making it clear that Newcastle wouldn’t be pushovers.

The Magpies, possibly catching United with a little bit of European hangover (it drew with Benfica earlier in the week), went after the Red Devils, playing a high line, pressing United’s increasingly creaky defenders, and relying on their brilliant young goalkeeper, Tim Krul, to save them when need be.

For such an open and athletic game, the two goals were pretty cagey. In the 49th, Javier Hernandez scored a very Javier Hernandez-type goal with his stomach on a Wayne Rooney free-kick rebound. Then in the 64th, Demba Ba scored a penalty after a controversial tackle of Ben Arfa by Rio Ferdinand in the United penalty area. Master of understatement Sir Alex Ferguson called the penalty decision “a travesty,” but it looked really close. The result will be forgotten soon, but what the draw says about Newcastle’s new identity should be remembered.

In a country, region, and sport in which history is always lurking, haunting, powering, and handicapping clubs, the Magpies have made the brave and brilliant move of moving on from theirs. At the beginning of thirsty scholar owner Mike Ashley’s reign, he seemed to be alternately pandering to and alienating the Magpie faithful, hiring club legends such as Alan Shearer and Kevin Keegan to manage one minute, firing them the next. He was like some kind of demented ghost of football Christmas past, reminding Newcastle of the good old days and then tainting the memory.

Perhaps all this butterfinger handling of the club’s legacy was somehow necessary to build a new Newcastle: one that can actually compete and sustain itself while still being adored by its fans. This Newcastle side — young, largely of French and African descent — with its bulldog midfield of Cheick Tiote and Yohan Cabaye and Jonas Gutierrez, its fleet-footed wingers Gabriel Obertan and Sylvain Marveaux, and brilliant keeper Krul, don’t seem to play with the weight of all the success and failures that have worn black-and-white stripes before them. Hell, you had to wonder how many of the players who took the field on Saturday even knew about Newcastle’s still-talked-about-on-Tyneside 5-0 victory over Sir Alex Ferguson’s team in 1996. And maybe that’s a good thing. To borrow a phrase from John Sayles’ Lone Star, sometimes you gotta forget the Alamo.

• While Newcastle rolled out of Manchester with a point and sole possession of fourth place, its Northeast neighbor Sunderland continued its downward spiral. Steve Bruce has made a lot of mistakes since taking over the club in 2009, largely in the transfer market, where he seems unable to keep hold of anyone willing to score goals for him (see Darren Bent and Asamoah Gyan). But aside from blowing a small fortune on a collection of transient strikers, Bruce’s biggest crime seems to be his origin story. Sunderland fans will never fully get behind the Newcastle native as their manager, and Bruce is sounding like he knows it. After Sunderland lost to the woeful Wigan on Saturday (at home!), Bruce commented on abuse he faced from the Stadium of Light crowd: “I just want to try to get it right. Hopefully the criticism has bottomed out today; I don’t think it’s ever been as bad as that. It borders on abuse. That’s just the way it is, though, and I have to accept it. I cannot help where I was born.” Odds on his departure have been slashed, unsurprisingly.

• Liverpool and Manchester City played out a pretty exciting 1-1 draw on Sunday that saw an incredible own-goal by Joleon Lescott and a Mario Balotelli sending-off (more on that in Quote of the Week). The Reducer actually thought this would be the perfect opportunity for someone to derail City’s unbeaten streak. Roberto Mancini’s team was coming off a harrowing midweek loss to Napoli in the Champions League (which seriously dented its masters-of-the-known-universe cred), where the Italian side may have discovered a plan for how to beat City. Namely, attack like a bunch of raiding barbarians and have Edinson Cavani on your team. Liverpool left its barbaric side at the (Anfield) gates and Dirk Kuyt is no Edinson Cavani (the hair, for starters). Still, The Reducer thinks and hopes City is bound to lose a match one of these days, if only for the sake of competition.

• Interesting to hear Arsene Wenger publically hand-wring over some of his players being fatigued. Arsenal has found success by settling on consistent lineup and Robin van Persie’s consistent scoring. He sounded like a man who was willing to trade advancing in the League Cup, ahead of their clash with Man City, in favor of resting the likes of RVP, Theo Walcott, and a grieving Aaron Ramsey. The Reducer can’t blame him. After last season’s League Cup Final loss to Birmingham at Wembley, Wenger might think the competition is cursed

Despite fine efforts from the likes of Jermain Defoe and Juan Mata, this week’s honor must go to Manchester City and England keeper Joe Hart. Check out 2:10 into the above video. Andy Carroll is going to be replaying that header in his nightmares for a while.

Quote of the Week: Roberto Mancini

Upon being asked whether it was true that Mario Balotelli damaged a training room door after being sent off against Liverpool, Mancini responded: “I don’t know this. If he damaged the door, he pays — like his house!”