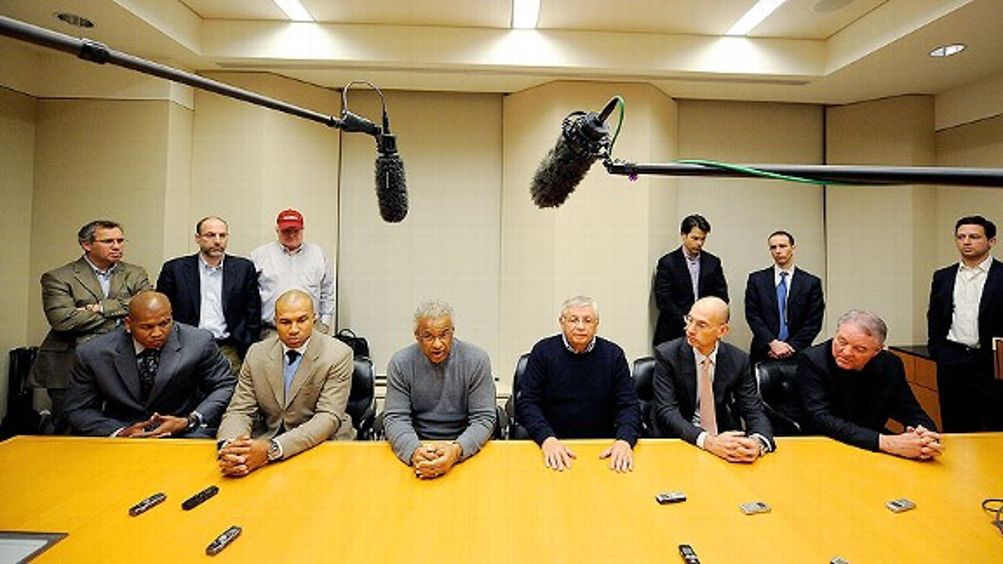 And so, on the day after Thanksgiving, when most of America was coming out of a tryptophan-and-Tony Romo-induced coma, and when hardly anyone at all was looking, they came up with a deal. There will be a 2012 NBA season, after all — a perfectly logical 66-game package beginning with a Christmas Day multimedia extravaganza that will be what ancient Rome would have organized, if Nero had invented the T-Cannon and Charles Barkley. This undoubtedly will include several of the league’s marquee, big-market teams, whose baleful influence over the game’s economics was supposed to have been management’s casus belli for the lockout in the first place. And it might have been, if the whole absurd kabuki ever had been about money in the first place.

The NBA lockout was as exclusively about money as it was exclusively about astrophysics. One way you know this is that the settlement that finally was reached was one that could have been reached last June. Like Henry Kissinger and Le Duc Tho in 1972, the league and its players struck a deal they could have had much earlier, and without the extended bloodletting in the meantime. The players took a reduction in the amount of basketball-related income — and can we find a rocket and fire that little bit of business-school jargon off to Pluto, please? — while winning some concessions as regards the league’s salary structure and in the rules regarding free agency. And that was pretty much it after five or six months of loud public wrangling — a brief outburst of authentic MBA gibberish and (poof!) back to work, gentlemen.

Another way you know that it wasn’t really about economics is that the league’s economic public case for its position became more and more preposterous as the weeks went by, and even the public began to notice that it was being taken for a fool. The hilarity hit high tide for me when David Stern started going around explaining that 22 of his 30 franchises were losing money. Tell me, do you suppose that when Stern sat down and chatted with the Nike corporation, or with the People’s Republic of China, to name only two of the wildly successful authoritarian operations with which the league does its business, the first thing he explained while pitching the NBA to them was that 73 percent of his league was in the red? Did you, at any time, expect to see Herb Simon, the shopping-mall billionaire who owns the “small-market” Indiana Pacers — a team that he bought for $11 million and which is now estimated to be worth $269 million — swiping the leftover bourbon chicken off abandoned plates in his various food courts unless the players surrendered to him a chunk of their dough? Of course you didn’t, because your mother didn’t raise a fool when she raised you.

(Can the NBA produce financial documents testifying that Simon and his fellow plutocrats were perilously close to selling apples on Fifth Avenue? Yes, because almost anyone could, if they hired Philip K. Dick to do their accounting.)

Lockouts are not devices of economic correction. That’s just a byproduct. Lockouts are attempts by management to exercise control over their workers. Period.

And the third and most important reason why you know that the lockout was not really about economics is that there was a lockout at all. Because 30 years of propaganda — thanks, Ronnie! — have convinced most people under 50 that unions are for losers, it eluded many of the people covering these events that lockouts are, and will always be, things willed into being exclusively by management. They are not natural phenomena. They are never truly unavoidable. They don’t “just happen,” and they certainly do not occur because “both sides” are at fault. Lockouts occur when management believes that unions are too strong, and they occur when management believes that unions are too weak, and they occur when management doesn’t want a union to exist at all. Lockouts are not devices of economic correction. That’s just a byproduct. Lockouts are attempts by management to exercise control over their workers. Period.

For example, while the famous Homestead riots in 1892 are remembered primarily for the violence that ensued after the Amalgamated Association of Iron and Steel Workers called a strike on June 30 of that year, it is rarely noted that the union took that action only after its members had been locked out the day before. This strategy was the brainchild of Henry Clay Frick, whom Andrew Carnegie left in charge of the Homestead plant while Carnegie beat feet for Scotland ahead of what he knew was coming back in Pittsburgh. In There Is Power in a Union, his magisterial history of organized labor in America, author Philip Dray describes what Frick was about:

“… Frick considered Carnegie’s oft-spoken solicitude for workers, whether genuine or not, to be antiquated and softheaded, and he was eager to demonstrate his own management style and willingness to trim costs.”

So Frick locked out the workers, who responded by striking the plant, and all hell broke loose for a few months. (That July, Alexander Berkman, a New York anarchist and the lover of Emma Goldman, got into Frick’s office and shot him.) The final upshot was that, by the fall of that year, the power of the nascent steelworkers union was crushed, which was the point all along. The Carnegie mill remained a non-union shop for the next 40 years.

None of which is to argue that, say, Dwight Howard is the equivalent of a steel-working grunt at the turn of the last century. It is, however, to demonstrate that lockouts come to pass either because management wants its fundamental relationship with labor to change, or because it profits from a status quo it seeks to maintain. The NBA lockout sought to accomplish the former, while the Homestead lockout sought to accomplish the latter. In both cases, the fundamental issue was control.

Control always has been important to David Stern. For example, in the past, he’s sought to maintain control over both Allen Iverson’s rap lyrics and over what the citizens of Seattle ought to do with their tax dollars. (Of all the things Stern’s done as commissioner, greasing the skids for the Sonics to spurn Seattle for the 45th largest market in America is his purest piece of accessorial banditry.) In 2005, following proudly in the footsteps of generations of American nuns, Stern instituted a “dress code” for his players so that the various corporate wolverines in the VIP seats wouldn’t think that Yo! MTV Raps had broken out in the lower bowl. And, no, you don’t exactly need the Enigma machine to decode what that was all about.

No detail is too insignificant. Nothing is so small it cannot be monitored. Last season, the NBA — which is to say David Stern — came down with a rule that states, and we are not making this up, that headbands cannot be worn upside down or inside out. This recalled nothing more than (a) the episode in Gulliver’s Travels in which the Lilliputians fight six wars over which end of a hard-boiled egg should be broken first, and (b) the scene in Woody Allen’s Bananas in which the new dictator of San Marcos decrees how often his subjects must change their underwear and that it thereafter be worn outside of their clothes “so we can check.” This nonsense got on the last nerve of Boston point guard Rajon Rondo who, rather than abide by official foolishness, ditched his trademark headband entirely. Not even Roger Goodell, the most anal of anal-compulsive commissioners, ever came up with anything this petty and stupid.

The lockout was nothing more than the headband rule writ large. It was an attempt to demonstrate who was in charge here. Stern saw the “perception” building that his players were less “dedicated to the game” than they were to their various “outside activities,” and that the hired help was “out of control.” The NBA’s kept press had been harping on this loudly ever since LeBron James took his talents, and his disappearing act in big games, to South Beach. And, again, you don’t need a microscope to read between the lines there.

Stern’s concern for his league’s fans was as transparently phony as was Carnegie’s concern for his workers. (Hearing the commissioner’s unctuous solicitude for the paying customers must have occasioned rueful chuckling, and projectile vomiting, in Seattle.) His primary constituency is a group of 29 men who don’t have to deal much with unions in their principal occupations anymore and who, therefore, are not accustomed to reacting well when the help gets, well, uppity. The lockout was THE perfect oligarch’s answer.

They got most of what they wanted, which means that most of them are probably very unhappy. The league suffered a public-relations debacle that very nearly became a public-relations catastrophe. But David Stern showed himself to be the tinhorn-in-charge once again, and there will be games on Christmas Day. God bless us all, every one.

Previously from Charles P. Pierce:
The Tailgate and Modern America
The Brutal Truth About Penn State
The Decline of Horse Racing
The Beginning of the End for the NCAA
My Memories of The National