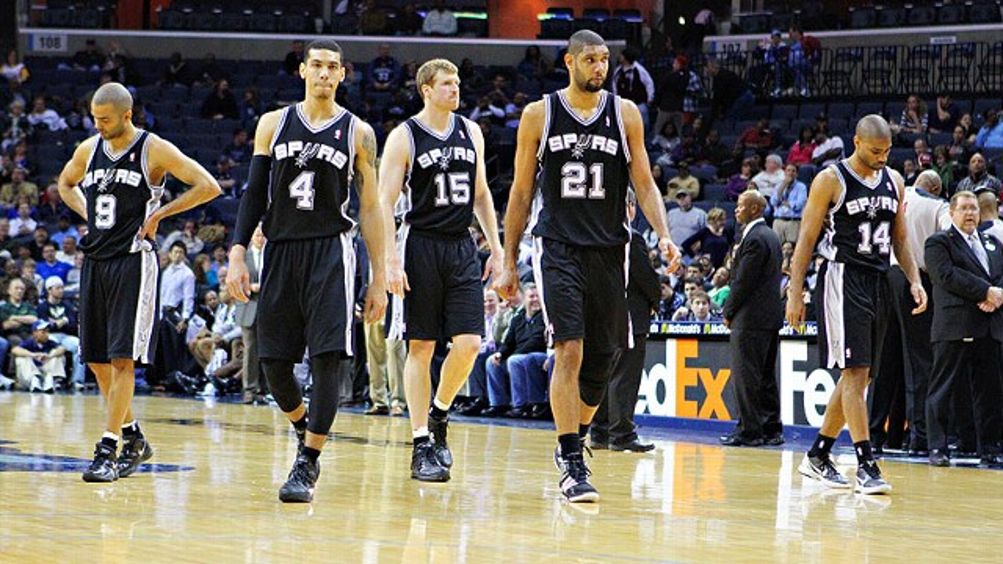 The Spurs are 23-9, good for the second-best record in the Western Conference. They have wildly overachieved again. But when you watch the Spurs night in and night out, each game feels like a struggle with mortality. For years, they have been tabbed the most boring team in the league, and now it finally seems as if collective boredom might end up killing off its fan base. When deciding to confront the idea of your own imminent death, you never really know if you should celebrate the will of the human spirit that lives to fight for another day, or if you should just tell yourself that you are at peace with the legacy that you left behind.

Watching Tim Duncan makes me feel that way. And even though the team is winning, nobody’s really thinking that it’s going to add up to much in the playoffs.

While large-market teams can inspire the biggest stories and offer a context to extend the most general metaphors, the most vulnerable fan experiences are constructed in small markets, where the bouncing of Ping-Pong balls and competency of the front office are actually important to the city’s economy and identity.

The funny thing about the Spurs is that they aren’t even really dying — at least not when it comes to wins and losses — so the front office can’t just put this generation to rest and start over. Sure, there are those sad moments when Tim Duncan gets his shots blocked by marginally talented young guys, but the team is thriving with a solid squadron built around Tony Parker. They’ve even already undergone the annual potentially catastrophic Manu Ginobili injury.

The Spurs manage to excel in the regular season because they always seem to find a handful of overachievers to supplement their Big Three. In fact, every time a Spurs bench player overachieves, it is tempting to want to celebrate the success of the Spurs as an organization that can turn “moderately skilled, character guys” into legitimate NBA players. Role players like Kawhi Leonard, Danny Green, and Tiago Splitter have all exceeded early season expectations, sort of like how Gary Neal, George Hill, and DeJuan Blair all have in recent years. But these guys have a tendency to no-show in the playoffs, and the emotionally manipulative ride toward the postseason crash begins again next season.

Does anyone really think the Spurs will win a playoff series? They were the no. 1 seed in last year’s playoffs. They could be the no. 1 seed this year. This, in itself, is impressive, but when your benchmark is winning championships, what could be worse than a team that plays well in the regular season and then inevitably flames out in the playoffs to a much younger and cooler team?

Perhaps one of the downsides of the Duncan era is that the Spurs haven’t branded their team as a hot-spot destination that was only ‘a piece away’ from winning a title. They cultivate strength in accepting that they are what they are. Acknowledging that they were ‘a piece away’ would diminish the fans’ faith in San Antonio’s most important celebrities and heroes. It’s hard to tell a city that a franchise formula that served as the foundation of its own identity has flaws that might prevent the team from ever winning again.

While most cities are driven to acquire and hype big-name stars, San Antonians would consider role players like Bruce Bowen and Avery Johnson to be just as crucial to the team and the city’s identity. San Antonio is the biggest small town in Texas and identifies itself as a working-class city. It isn’t as trendy as Austin, as dehumanizing as the Houston sprawl, or as ‘everything’s bigger in Texas’ as Dallas. San Antonio consists of loops of suburbia created by the Texan desire for new money to escape from the antiquated inner city for ‘more acreage,’ meaning that there is no cultural center in San Antonio. Theoretical cultural institutions like the River Walk and the Alamo are basically packaged tourist destinations. Since Tim Duncan was drafted, the Spurs have become the cultural center of the city because Duncan was able to add substance to the projected ideals of David Robinson, who largely existed as a ringless figure of morality.

The lack of widespread interest in the Spurs isn’t surprising, because fans have the consumer right to use imaginary franchise classism to guide their interest in specific teams. That just means a small-market team has the challenge of convincing its fans that the team ‘belongs,’ and its fans aren’t just an afterthought in the relevant tier of the NBA. After winning four championships and witnessing the greatest power forward of all time play on a nightly basis, the Spurs and their fans have constructed a championship psyche to overshadow any small-market insecurities.

Most small-market NBA teams deploy various marketing gimmicks in order to ‘get fans in the seats’ and generate organic local interest in the team. Since they don’t have a local media that can generate Linsanity levels of buzz to increase the profile of their team, they must offer unlimited crappy food, ‘free swag,’ and other upper deck promotions to add to the fan-perceived value of the team experience. However, the most important idea to be able to sell their fans on is the idea of ‘hope.’ Since the Spurs are trending downward, they aren’t built on a traditional upward trending construct of NBA hope that teams like Oklahoma City, Minnesota, and even Washington are.

Since the Spurs have already matured into a championship team, their current iteration of hope relies on constructing a narrative around savvy veterans who were able to overcome physical limitations in order to beat younger talent. Every other incubating franchise would love to achieve an imminent mid-round playoff exit where its team ‘went down fighting.’ When the Spurs go down fighting, it’s just depressing and confusing to see those same figures fall after already achieving the pinnacle of basketball achievement.

The Spurs are a unique ‘small-market’ team that operates as the only major professional franchise in the seventh-largest city in the United States. The cross-pollination of superstars with new and buzz-worthy markets has led to the Spurs’ omission from more games than usual on this year’s national TV schedule. Do mass-market fans really want to watch a team dying right before their eyes?

When a small-market team is confronting its own franchise mortality, it automatically becomes a sad portrait of impending irrelevancy. The Spurs are somehow sadder than the Charlotte Bobcats because you can’t just forget about them altogether. Whether it is the Spurs’ recent playoff purgatory, Dwight Howard holding the Magic hostage, or the New Orleans Hornets establishing themselves as the league’s premier free agent non-destination, all doomed small-market scenarios make fans wonder if they will ever feel any semblance of glory, pride, or even just marketable hope ever again.

If the Spurs can’t be celebrated for fighting against the imminent death of their golden era, can we just watch them and celebrate their legacy? Since Tim Duncan is unlikely to ever have a ‘Look at Me, I Need Your Validation’ Farewell Tour, the Spurs as we know them will disappear before we even knew we were supposed to appreciate them. We are quietly watching Duncan’s Last Stand, and instead of rooting for rising teams to put the final nail in the Spurs’ coffin, we should be rooting to see one of the NBA’s last relics of historical greatness succeed one last time against artificially created buzz franchises and misguided marquee-player movement.