The Menace That Missed 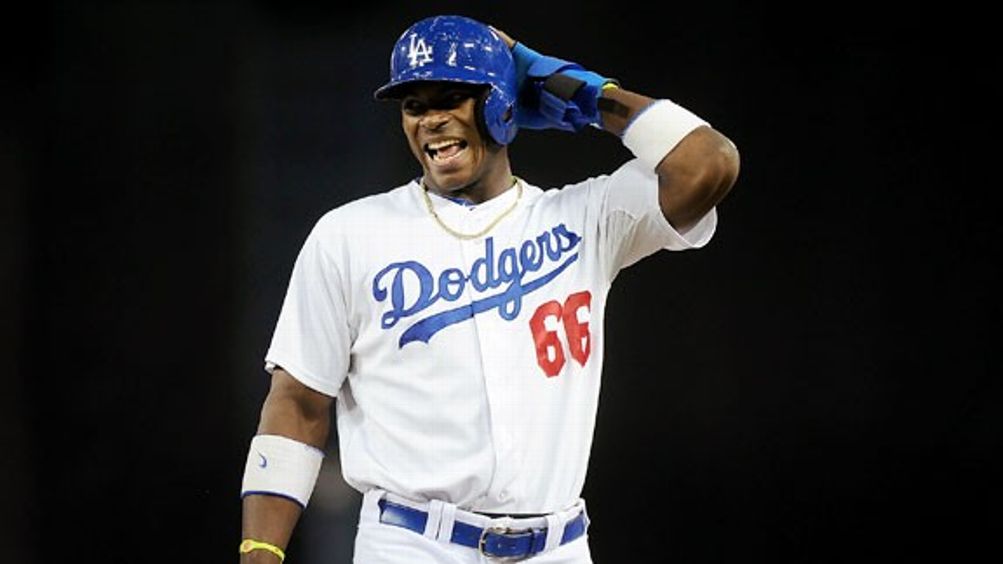 I stand convinced: In the sixth inning of Tuesday night’s game against the Diamondbacks, Yasiel Puig tried to bunt the ball with his face. “Home runs are boring,” Puig told teammate Hanley Ramirez in the clubhouse before the game. “What I want to do is bunt and run the bases. Small ball,” Puig explained, “will let me connect with my lesser teammates.”

“Bunting,” said Ramirez, “is for skinny white dudes who play too many positions. If you want a challenge, bunt the ball with your face.”

And so he did. Puig went down hard. Dodger Stadium fell into quiet disarray. Nobody really knew what to do. Some fans in front of me started booing. But at whom? After what felt like a half-hour, but was probably closer to three minutes, Puig got up on unsteady legs, knocked the dirt out of his helmet, and trotted off to first base.

In the seventh, after Zack Greinke had plunked Miguel Montero, Ian Kennedy threw a fastball at Greinke’s helmet. The second Greinke-related donnybrook in the Dodgers’ young season broke out. Not wanting to miss the action, Puig charged into the fray. A fan sitting a few rows in front of me in the left-field nosebleeds yelled out, “Oh shit! There goes Puig!” Our section stood up and we craned our necks to see where no. 66 was running.

After some tussling and screaming and pointing (all awesome), Puig was wrestled off the “pile.” (Baseball, please enforce the same line-of-sight courtesy that exists in hockey. If only three guys are going to throw punches and you’re not going to get in the middle of it, please just stand off to the side so the fans can see the action.) With his teammates and coaches still shoving and screaming, Puig walked alone back to the dugout, through the tunnel, and back into his fortress of solitude.

But what an epic poem! There are 97 games left in the Dodgers’ season, and unless Don Mattingly decides to piss on the Dodgers fan base by playing Andre Ethier over Puig when Carl Crawford and Matt Kemp come back from injuries, Puig should play in about 90 of them. This puts him on pace for 36 home runs, 90 RBIs, and 153 hits for the rest of the season. Had he played a reasonable 154 games at this pace, he would have ended up with 62 home runs and 154 RBIs. He also would have gotten in 17 more fights and been tossed from 17 games and trended on Twitter about 170 more times.

At the quarter-season mark, the Dodgers lead the majors in attendance. Puig’s impact on those numbers is hard to quantify, but as he burned through his first homestand, attendance steadily increased throughout the week, capping off at 52,716 for Saturday night’s game against the Braves. TV ratings have also been boosted by Puigmania. Friday night’s game against the Braves drew a 3.4 rating, the team’s second-highest of the season. According to team officials, the average TV ratings for Dodgers games on FSN Prime Ticket are up 28 percent in the Puig era (may it enjoy a healthy, fruitful life), despite being pitted against the season finales of several hit shows and the NBA Finals. If you’re unimpressed by these numbers, remember that the Dodgers are in last place in the National League West and playing without Matt Kemp, Carl Crawford, Josh Beckett, and Chad Billingsley.

According to a report by Dylan Hernandez of the L.A. Times, the Dodgers sold about 2,000 Puig T-shirts and 600 of his jerseys in a four-day span, a team record. Like all things Puig, it’s a bit unwieldy to draw any meaning out of something like “the biggest jersey seller in a four-day period,” but let’s also remember that the Dodgers have had their share of phenoms and barked carnivals (who can forget the merchandizing mayhem of Mannywood?). Puig outsold them all.

Within the scattered sports brain of Greater Los Angeles, Puig has even managed to supplant the endless Kobe and Dwight talk on all the local channels. Last year, Mike Trout had the greatest rookie season in the history of baseball. Nothing he did could really move the needle here in Southern California. Puig, muscles and all, has L.A.’s full attention after a mere 10 games. Do you know how hard it is to get L.A. to concentrate on anything?

This is where we should exhale and plug in some line about small sample size. This is where we remind the readership that Yasiel Puig will most likely not hit 80 home runs in 100 games and that he is not the greatest baseball player of all time. This is where we leak out our most withering sigh and remind ourselves (and Murray Chass) that life is one big regression to the mean. We say, “Enjoy Yasiel Puig while you can” and pat the dumb fans gently on the head.

This is where we say, “Yasiel Puig has had an unbelievable start. Small sample size, though.”

Or, “Yasiel Puig is a communist Adonis. Sure, it’s a small sample size … “

As someone who grew up reading Bill James’s abstracts and loving the hard line in all debates, I’ve long been a speaker of these sorts of annoying, almost guttural tics, mostly because of their argumentative value. If you represent reality as inscrutable numbers and bleak outlooks, you’ll win most arguments merely by forcing the other side to acknowledge its sentimentality. Way back in 1990, I recall scoffing at a fellow fourth grader and unrepentant Yankees fan who had lost his fucking mind over Kevin Maas.

“Remember Sam Horn,” I said to my Mucho Maas friend. And the same sentiment went for all fat, slugging first basemen who burn up the happy side of variance in their first few weeks in the bigs.

I was right, of course, but I now hate that 10-year-old self, smug little bastard. Not because he was mean, but more because that irresistible line of rationale turned him into one of those sports fans (many of whom become sportswriters) for whom every barroom conversation becomes a bearish hosing down of expectations.2 Had this little bastard not met the one blazing hot start he could not pooh-pooh (hint: rhymes with grin-sanity), he would have spent his whole life as the guy who calmly and only slightly condescendingly repeated those three irrefutable words to all the right-brained, tilted, sentimental Dodgers fans in Los Angeles: “small sample size.”

When a phrase like “small sample size” becomes ubiquitous, the logic drops out. It’s no longer rational to temper anyone’s enthusiasm about Yasiel Puig’s ridiculous first 10 days with the shocking revelation that 10 days is just 10 days. The excitement over Puig comes directly out of what he’s done in his short stay in the majors, not from his long-term projection — pointing out his inevitable regression to the mean is largely beside the point. More importantly, it’s boring and needlessly depressing.

Why point out something so obvious? If the best rationale demands that we point out the inevitable end of a string of good luck, how, then, do we describe our own lives? In what other forum, save for gambling and the stock market, do we temper great fortune with the cool reminder that life will eventually grind us all down? Don’t we already assume that? Why say, “I hit the Powerball, but, man, those taxes and the sad history of other Powerball winners … And I’m also going to die one day”?

We don’t need it anymore. I move we abolish the phrase “small sample size” and all of its iterations. Let’s just say, “Yasiel Puig is Tupac’s son from his marriage in Cuba!” without having to staple on the requisite, “Sure, but it’s a small sample size.”