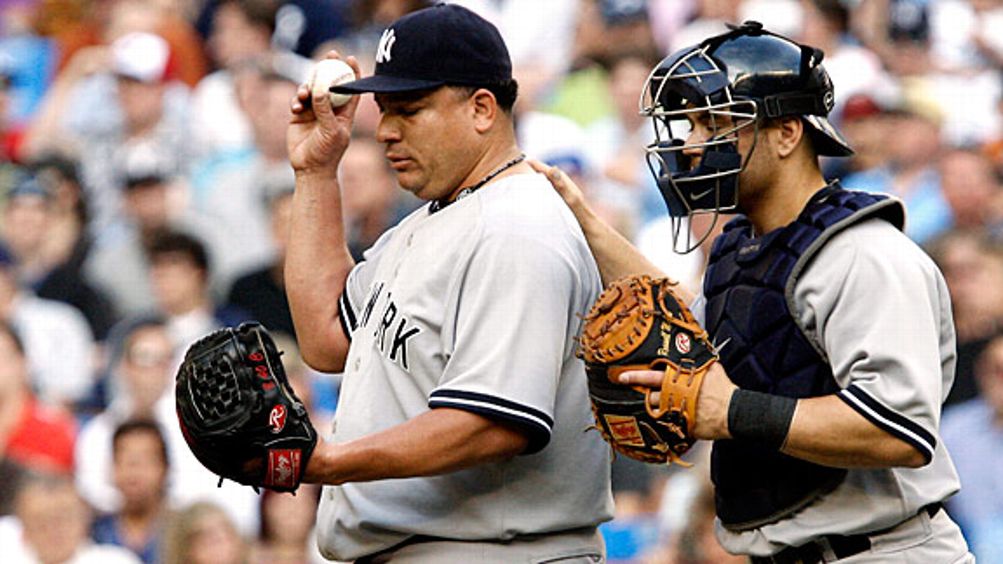 Baseball has a way of creating fleeting genius, especially out of pitchers. The game’s history is littered with arms that were briefly dominant, as though they’d been struck by lightning. Some strange confluence of physics, novelty, and confidence happens. Billy Koch is unhittable; Zach Britton throws one of the game’s best sinkers; Mark Fidrych looks like a future Hall of Famer. Then everything falls apart, and everybody’s left wondering why.

Sometimes there are obvious explanations. Koch was touched in the head and may have come down with something called Morgellons Disease; Britton, now in Double-A, is still trying to decide from which side of the rubber he should pitch; Fidrych had an undiagnosed tear in his rotator cuff.

Sometimes, though, it’s harder to find the reason. Sometimes it just seems like the brilliance was there one day, and then it wasn’t there the next.

Last night, the magic left Bartolo Colon of the New York Yankees. With distance, it might prove to be just one of those bad starts, a singularly colossal meltdown against the Toronto Blue Jays en route to a 16-7 defeat. But it didn’t look or feel like that. Colon looked more like a man in the middle of his own private Flowers for Algernon, like a man of temporary blessings.

Here was a pitcher who had been renewed this season, almost miraculously, one of those rare stories of improbable return. After Colon won the AL Cy Young Award in 2005, he suffered through injuries and four mostly forgettable seasons until he had fallen out of the game, seemingly for good. But then Colon underwent medical intervention that might as well have consisted of pixie dust and sorcery — a little more on that later — and the Yankees took their famous winter flyer on him. Somehow, he made the unlikely journey from overweight satellite to the bullpen to the starting rotation to a complete-game shutout against the Oakland A’s, turning himself into New York’s second-best starter and one of the principal reasons this team, despite its injuries and slumps and dramas, was still near the top of the AL East.

Now, against the Jays, he threw 42 pitches and still did not make it out of the first inning. He gave up eight runs — in fairness, only three of them were earned, after a bad botch by Eduardo Nunez at third — on six hits, including a pair of doubles by the emergent Eric Thames, and a couple of walks.

Optimists and the tender-hearted might point out that Colon was unlucky, which no doubt he was. The error came with two outs, and the Jays dropped down two infield squibs for bases-loaded hits, swings that tucked the ball just a few agonizing feet down the third-base line.

On the second of those, Colon rumbled on over, reached down like a giant making a vague stab at tying his shoes, and pushed the ball with his glove in the general direction of home plate. Yankees catcher Russell Martin had to dive across the turf to block it. Another run scored. Colon’s own momentum carried him a few more steps into foul territory, where he eased to a stop and looked down at the ground. It took him a long time to lift up his head.

After, there was some nebulous talk about his hamstring, which had put him on the disabled list earlier this year. He had looked ginger on an earlier play in which he was forced to cover first. “Bart always says he’s OK,” manager Joe Girardi said. “I’m not sure.”

Through a translator, Colon said that he had been nervous about his leg, but that it wasn’t causing him any pain. Besides, it’s his landing leg; it shouldn’t affect his delivery that much. It was more the fear of injury that was holding him back. Colon has come down with an alarming case of the fragiles, the anxiety that shadows a man who knows he’s not built to last. “No, that was my fault,” he said of his outing, after Girardi tried to give the defense at least part of the blame. “I didn’t pitch good.” His sinker, he said, has lost its sink.

He said as much after his previous start, too, a 5-1 loss against the Tampa Bay Rays, and now here he was again, as bad as he’s ever been.

In that moment when he found himself in foul territory, Colon looked broken in more ways than one. There was no fire in him, no anger. He didn’t look like a man who had questions. Defeat had simply taken wonder’s place. After Girardi pulled him, Colon walked slowly to the dugout, pushing his fist into his glove, and then sat on the bench, his head down again. Last night’s debacle was his shortest start since 1997. He was a much different man then.

Only on Tuesday, two representatives from Major League Baseball had shown up at a hospital in Santiago, Dominican Republic, with a letter signed by Colon. According to the New York Times, the pitcher had given written permission for Dr. Sergio Guzman to release his medical records. A raft of Spanish-language documents were passed between the doctor and the couriers, more than two months after they were first requested.

They apparently recount a procedure that Colon underwent the spring before last. By then, Colon had a torn rotator cuff, along with significant damage to his tendons and ligaments. His past four seasons had not been some fluke. He couldn’t pitch because his arm was in pieces — until Dr. Guzman claims to have injected stem cells that had been culled from Colon’s own fat and bone marrow back into him. There was the lightning strike. Less than a year later, Colon was electric again.

The biological truth about Colon may or may not lie in those medical records. No matter what’s written on that paper, not very many people will ever know what, exactly, happened in that Santiago hospital last year. It’s unlikely that any combination of routine, legitimate medical terminology could adequately explain how a 38-year-old man in terrible shape with a blown-out arm could throw more than 90 miles per hour again.

Sometimes, it’s not the end of fleeting genius that should leave people wondering why.

Sometimes, it’s the beginning of it.

Chris Jones is a Writer at Large for Esquire; he covers the American League East for Grantland. Follow him on Twitter at @MySecondEmpire.