Coldhearted: Attack of the Peons

John Cena Is Being Beaten 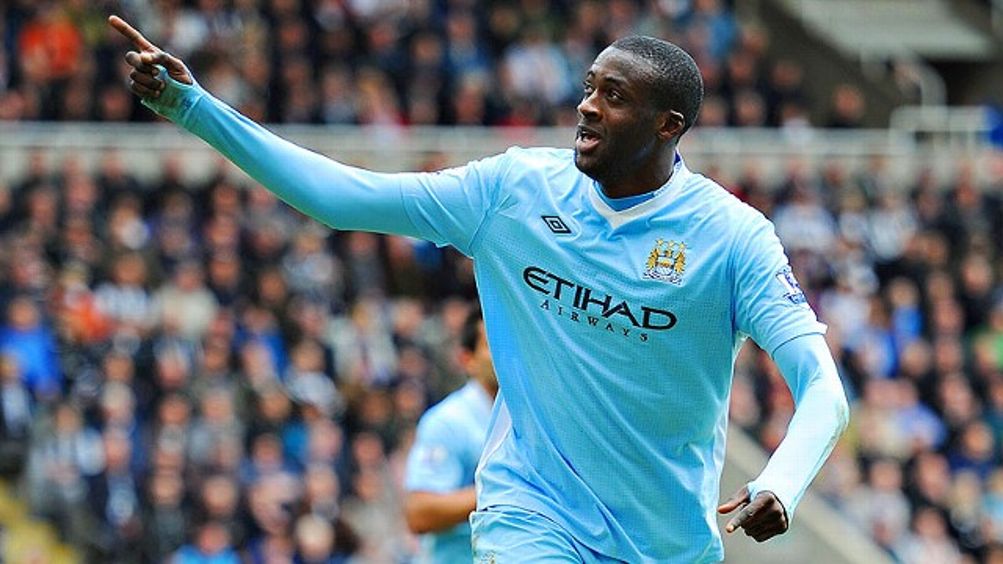 This coming Sunday we will all be overwhelmed by an overwhelming amount of Premier League football. I’m seriously overwhelmed just thinking about it all. All the Premier League teams will take part in matches, all kicking off at the same time so that no competitive advantage can be had by any one club. We’ll get to Manic Sunday in a bit, but for now, let’s take a different kind of look at this past weekend’s proceedings: three snapshots of three goals in three games that hugely impacted the Premier League’s second-to-last weekend.

In the 61st minute of Manchester City’s Sunday clash with Newcastle, Roberto Mancini substituted Samir Nasri with Nigel De Jong. On the surface — in that it was both tactically defensive and a bit dickish1 — this was a typical Mancini move. When De Jong walked up to the fourth official at St. James’ Park (or Sports Direct Arena), sharpening his Adamantium claws, waiting to check in to the game, it seemed like the Italian manager’s conservative instincts were glory-blocking City on the road to the English Premier League title. Level with United at 83 points (at the time of kickoff), City had an insurmountable goal difference lead on their Manchester rivals; they needed three points. Anything less would give United a chance to usurp the trophy.

What seemed like a bet hedge turned out to be a kill shot. Mancini plays favorites, burns bridges, and, yes, shades toward defensive football. But he’s no dummy. He knew that in midfielder Yaya Touré, he had the most in-form footballer in England. He just needed the rest of his boys in blue to get out of his way.

With De Jong installed as resident kick puncher, next to the slightly more subdued Gareth Barry, Touré was given license to ill. Positioned behind Carlos Tevez (and later Edin Dzeko) in an attacking midfield line with Sergio Aguero and David Silva, the Ivorian behemoth did pretty much exactly what he did last week against Manchester United: He took over the game.

Touré made space-creating dribbles, one-touch passes to Carlos Tevez, and looping, long-range deliveries to Pablo Zabaleta. Newcastle’s Yohan Cabaye tried to stop him, but he splintered apart on contact, like a ship crashing into a rock. That’s the thing about Yaya Touré: There may be no player in Europe right now capable of mixing grace and strength in quite the way he does.

Newcastle were trying — unlike so many other clubs, the Magpies actually had something to play for here, trying make the improbable dream of Champions League football next season come true — but it didn’t matter. In the 70th minute, Aguero received a pass from De Jong. The Argentine wrapped it up, put a bow on it, left a really thoughtful note, and then Touré threw a sinker from about 25 yards out that Tim Krul will probably need scream therapy to forget about.

That’s what money buys.2 That’s a goal that knocks teams “off their fucking perch.” That’s a goal that changes the course of events. That changes a city and a footballing country and a league. Touré did it in the FA Cup, he did it against United the week before, and he did it against Newcastle on Saturday. In celebration, Touré ran over to the right-hand corner of the pitch and fell down, flat on his back. There were the names: Kun, Silva, De Jong, Zabaleta. You could make a joke about the pile of money on the ground. But right then and there, they just seemed like football players, not acquisitions. And that sound, that delirious reaction from the traveling City fans, felt earned. If that’s what money buys, maybe it’s well spent after all.

I would love to just talk about Robin Van Persie’s first goal of the game, and how the PFA Player of the Year is an athlete we should all feel lucky to watch, but instead I’m going to talk about how Arsenal biffed it.

This is the thing with the Gunners: They soar or crash. They can’t just do what needs to be done. They are capable of producing such incredibly satisfying, life-affirming football. The aforementioned RVP goal came from yet another inch-perfect Alex Song Hollywood pass. Van Persie’s run was perfectly timed, Song’s delivery was so inventive that you can practically see the Norwich defenders say, “I didn’t think he was going to do that” to one another, and the Dutchman’s finish is perfectly calm and laser-guided accurate. It was a moment of football where your heart takes flight.

Of course it was surrounded by 94 moments where you wondered whether Arsenal had any business in the top half of the table. And nowhere was this more evident than in Grant Holt’s 26th-minute strike to put the Canaries up 2-1.

I say “strike” loosely; Holt was headed toward goal with the ball at his feet and Kieran Gibbs marking him. He took a hopeful shot that careered off Arsenal’s young, English fullback and looped over the mournful head of Wojciech Szczesny. As Holt peeled off to celebrate, the Arsenal players could do nothing but drop their heads and rue their luck. There was no Szczesny-tearing-strips-off, no defensive midfielder or central defender clapping to get his team back into it. Just acceptance. Like they had seen this movie before.

Of course they have, haven’t they? The movie, the sequel. They bought the Blu-ray. The Carling Cup final last season; Robin Van Persie’s yellow (and red) card for time-wasting at the Camp Nou in last season’s Champions League; hell, even Szczesny’s butterfingers handling of Wes Hoolahan’s earlier equalizer. It’s like these guys listen to “Lose Yourself” in the locker room and say to one another, “Cool! Let’s do the opposite!”

Going into Saturday’s match, Arsenal were given three chances to all but seal automatic Champions League qualification, with matches against Wigan, Stoke, and Norwich all more than winnable. They drew all three, putting them in on the spot in a hair-graying last weekend where they need to beat a West Brom team playing for their soon-to-be-off manager. They are where they are because of a 30-point haul, accumulated from February 4 (when they stomped Blackburn) to April 11 (when they won their 10th straight match, defeating Manchester City). For 10 games they were world-beaters; for the other 27, they have been a prettier Fulham. Average. Stuck in the middle of the pack. Van Persie has kept them afloat this season; if they lose him (and it looks like he’s keeping his options open), there will be a lot more head-hanging at the Emirates next season.

If I had a dollar for every time I ruined a perfectly reasonable conversation about a sport other than football by squawking about how much better every other sport would be if it had promotion and relegation, I could probably buy Coventry City and promptly sign myself to play attacking midfield.3 I’m starting to wonder about relegation, though. Yes, it is sports Darwinism played out in front of us, and, yes, it makes the games played by the worst teams as important as those played by the best. But they are the worst teams, you know? Just because the games are important doesn’t make them any good.

I’m sure next weekend will provide some drama, just like Stephen Hunt’s skin-saving goal for Wolves did last season.

But after sitting through Blackburn-Wigan on Monday, the highlights of which were a chicken running onto the field, a topless fat man verbally abusing Blackburn manager Steve Kean, and a postgame insurrection by disgruntled Rovers fans, you start to wonder whether more than three teams should be given the trapdoor exit. Or whether teams should be allowed to just go about their business without worrying about falling out of the league in which they are competing.

Then something like this Djibril Cissé goal happens. The fact that this guy has more leg injuries than Cricket from It’s Always Sunny in Philadelphia might have something to do with it. Or maybe I just find the fact that the French striker is only capable of scoring goals or getting red-carded completely endearing.

Actually, no, you know what it is? It’s the way Loftus Road shakes when the goal goes in. The way Cissé doesn’t even know what to do with his celebration (HE SHOULD BE ALLOWED TO JUMP INTO THE STANDS AND TAKE HIS SHIRT OFF).

It’s the way Anton Ferdinand and Jamie Mackie and Clint Hill have to chase him down. It’s the way Jeff Stelling loses his mind on Soccer Saturday …

Even if it’s ugly football, it’s still football. And even if you have to slog through hundreds of minutes of grotesque long-ball merchants, played out in front of half-full stadiums, sometimes you get moments like that.

Here’s how this will break down:

The Title
Real simple, City beat Queens Park Rangers and they win the Premier League title. Simple? If Mark Hughes woke up in Belize sleeping next to Sofia Vergara and had Mario Batali in the kitchen preparing him breakfast, he’d still have an ax to grind. So just imagine how he’s feeling going into Sunday, taking his QPR team to the Etihad — where he was fired to make way for Roberto Mancini — with the chance to deliver the title into the loving hands of his old manager Sir Alex Ferguson. Mad axes in play here! To say nothing of the fact that Bolton are going to be playing a Stoke team that seems to already be on the golf course, mentally. QPR! Do you believe in miracles?

The Champions League Spot
I say spot because if Chelsea win the European Cup in Munich, only three other teams from the Premier League will compete in the Champions League next season.4 So Tottenham, Newcastle, and Arsenal are all playing for one spot, basically. Arsenal play West Brom and Spurs play Fulham. Neither WBA nor the Cottagers have much to play for other than pride. Depending on what happens Sunday, it could be the last time we see Robin Van Persie play for the Gunners or Gareth Bale and Luka Modric play for Spurs. Something inside me (history, I guess) tells me …

Relegation
This is between QPR and Bolton. I think, as stated above, QPR get their wigs pushed back up in Manchester. But, and it pains me to say this because Bolton have been cursed this season …

Prediction: Bolton have been cursed this season. Losing Stuart Holden and Lee Chung-Yong, the gut punch of seeing Fabrice Muamba suffer a heart attack during a game. Nothing has gone right for Owen Coyle’s team this season, and I don’t think the worm turns on the final day. QPR stay up.

He’ll probably be banging in goals for a bigger club next season, but here’s to Deuce’s 50th Premier League goal, scored with this brilliant free kick against Sunderland.

Lescott on City fans anticipating a league title: “I’d say to our fans, keep a lid on it this week.”