The Reducer, Week 36: You Take the Champagne 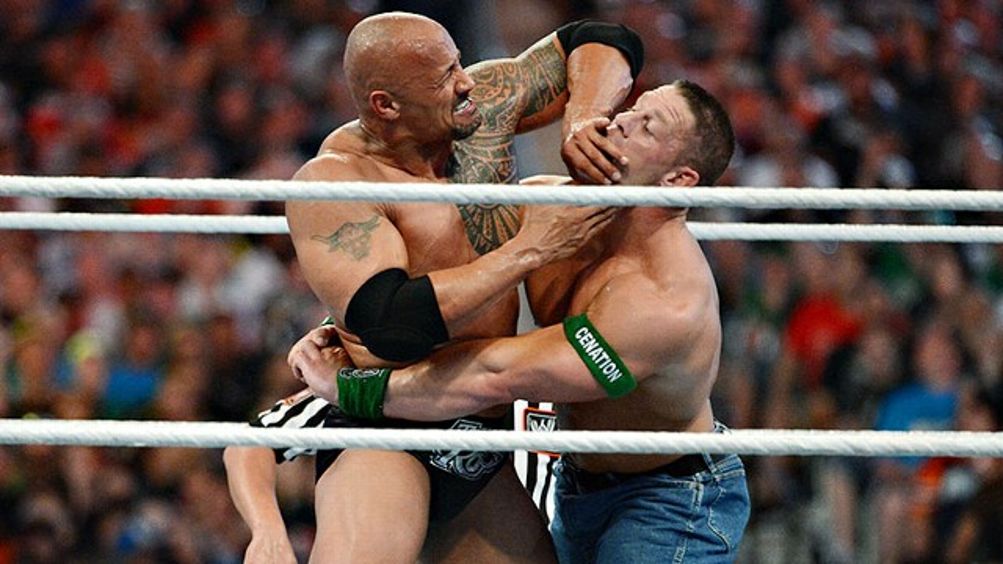 I‘ve never been a big fan of John Cena. Don’t get me wrong, I’m not one of the guys who launches into a “Cena Sucks” chant every time he hits the ring, but between the repetitive string of moves that he pulls out in every match and the completely inexplicable Southern accent he puts on whenever it’s time for his promos to get “serious” (despite the fact that he’s from Massachusetts), I’ve never been a member of the “Let’s Go Cena” camp, either. Or at least, I wasn’t. Over the past year, there’s been a change, one that’s built so slowly and surely that it took me completely by surprise when I realized what had happened.

John Cena has become an underdog.

When you get right down to it, that’s a pretty mystifying transition. Cena is the WWE. He’s the guy on the posters, the 7-Eleven cups, the programs. When you watch the signature at the opening of every Raw or SmackDown, it’s Cena who gets the last word with “the champ is here,” and even when he doesn’t have the title, it’s a pretty accurate description of his spot on the roster. For better or for worse, he’s the face of that company.

But from a storytelling standpoint, that’s a problem. Without a challenge to overcome, he’s just a dude that the camera’s pointed at the longest; a hero by default. The character they had established didn’t match up with what was going on in the ring, and while that might still support the ever-expanding rainbow of John Cena T-shirts, it makes things boring as all hell to actually watch.

The turn began with the lead-up to last July’s Money in the Bank pay-per-view and Cena’s feud with CM Punk, during which Punk set himself up in opposition to both Cena and the company. It played out as a mirror of the 2005 “Summer of Punk” angle from Ring of Honor, hitting the same notes in reverse. Rather than the sellout who was threatening to take the ROH championship with him when he went mainstream, Punk was now the conquering hero of independent wrestling. He was the perfect foil for Cena, the epitome of the prepackaged Superstar who seemed to have emerged fully formed from beneath the TitanTron, jorts and all.

The main event of Money in the Bank was one of those few matches that actually lived up to its buildup. Cena and Punk were incredible in the ring — and even the storytelling was amazing, with Cena losing because of his devotion to preserving, for lack of a better word, the integrity of the WWE. A title he had to cheat to win would’ve meant nothing to Cena’s character, but the end result was that when it came down to it, the golden boy of the WWE couldn’t keep this indie guy from walking out with a belt whose very design makes it his championship. He even lost the rematch.

That’s what made it a turning point: The story of Cena vs. Punk wasn’t about two men in a ring, it was about two opposing philosophies of what wrestling should be. It was the WWE vs. the indies, and amazingly, Punk wasn’t cast as the villain. The person who was cast hell-bent on destroying the WWE from the inside and who threatened to jump ship and go to another company was presented as just as much of a hero as the guy trying to defend the company’s honor. The crowd was allowed to cheer for CM Punk, because for the first time, the WWE wasn’t expecting them to be WWE fans. They were expected to be pro wrestling fans.

From there, Cena went into a largely forgettable, mercifully short angle with Kane that was accurately described by Grantland’s David Shoemaker as “the WWE’s corniest feud.” In a lot of ways, this whole thing felt like a sort of course correction away from the more interesting developments surrounding it. Cena was put back on top to the point where even at an event called Elimination Chamber, the actual Elimination Chamber matches were done at the top of the show so that he could have the main event.

Then came The Rock. Or rather, then came Dwayne Johnson, reprising the role as The Rock that he’d walked away from in 2004 to work in movies.

Cena’s feud with The Rock had its start at 2011’s WrestleMania XXVII, but things only really picked up between them in the months leading up to the match at April’s ‘Mania XXVIII. Again, the Rock made a perfect opponent for Cena: As much as Cena was the focal point of the WWE as it stands today, the Rock was an icon of the Attitude Era, when pro wrestling was at its height in pop culture. His presence was a reminder of what the WWE had been.1

But just like before, Cena’s opposition to someone who had been built to be a dominant force brought out the best in him, and his response led to the best promos of his career. For all the Rock’s charisma, the fact remained that he left wrestling at the height of his fame, and Cena used that truth to build his own narrative. It may have been a hard sell — especially considering that Cena’s own dalliance with the movies had subjected the audience to what felt like an eternity of video packages debating whether John Cena could win a fight with John Triton, the character he played in The Marine — but the focus was on the idea that when filming was over, Cena came back instead of sticking with Hollywood. As much as the Rock claimed to love wrestling, there was a seven-year absence that proved Cena’s point for him.

I was convinced that Cena was going to get the victory at ‘Mania. In terms of storytelling, it just didn’t make sense to me that WWE would have the man of today lose to the man of 10 years ago, especially considering how much better Cena’s promos were during the run-up. There was an honesty to Cena looking into the camera, leaving out the affected Southern accent for once, and telling The Rock, “I’ll be goddamned if I let you come in here a visitor and take my life away” that flew into the face of the nostalgia and artifice The Rock was playing off of. A win for The Rock would mean nothing. A loss for Cena would be an admission from the WWE that their glory days were behind them.

But that’s exactly how the story played out. They knew full well there’s no way that the present can compare to your memories of How Things Used to Be. Wrestling is never going to be exciting in the same way that it was when you were a kid. WWE had been beaten by the indies, and now it was beaten by the ghost of its own past glory.

Brock Lesnar’s return to the WWE completed the pattern of Cena’s odyssey. At his weakest moment — after a defeat on the biggest stage in his industry by someone for whom wrestling was essentially a giant promotional tool for G.I. Joe: Retaliation — Cena was attacked by Brock Lesnar, and what he represented was obvious. Lesnar, who walked away from the WWE at the height of his push, was mixed martial arts personified.

It’s impossible to overstate the influence that the rise of MMA has had on pro wrestling, both in terms of how wrestlers have started building their move sets around jiu-jitsu strikes and submission holds for a more “authentic” style, and in how it’s chipped away at the industry’s market share. MMA gave everyone who preferred the violence of pro wrestling over the story lines something to focus on that didn’t have the stigma of being “fake.” As wrestling shifted to “sports entertainment,” acknowledging that it was driven by stories, MMA filled what was left. Lesnar’s defection to the UFC and the success he found there (after an ill-fated year at the NFL) made him the perfect representative of the danger presented on both a physical level and to the business.

That was the point that was hammered home by Lesnar and John Laurinaitis, who has risen to become one of the greatest villains on television. He’s the next evolution of the Mr. McMahon character, but whereas Vince McMahon played a role that was insanely, cartoonishly evil — remember the time he made a pact with the devil, crucified his daughter on national television, and then literally wrestled a match against God? — Laurinaitis hits that perfect balance where you’re never quite sure if he’s sinister, incompetent, or some horrifying combination of the two.

Laurinaitis had been the figure in the background for this entire arc — he was the person Cena punched out at Money in the Bank in order to keep things honest — and his character was slowly building into the perfect archenemy for Cena and what he represented. Here, with one word, Laurinaitis stepped up to become what should by all rights be the most hated character in pro wrestling: “Legitimacy.”

That was Laurinaitis’s stated reason for bringing Lesnar back to the WWE, but it’s the unspoken corollary that really matters. It was the biggest possible fuck-you. Laurinaitis was telling us that WWE was the bastard child of the carnies, a bunch of characters pretending to hit each other over titles that didn’t really matter. In bringing back Lesnar, Laurinaitis had kicked off his reign as GM by cheerfully setting himself against the entire concept of professional wrestling. It was genius.

And the exclamation point on it was the image of John Cena, his mouth bloody after Lesnar punched him in the opening of Raw. It was such a beautiful shot that I’m torn between thinking it was an amazingly favorable accident or that it was staged with a blood capsule, but it honestly doesn’t matter. The man who represented wrestling had been taken down hard by the man who represented MMA, and the countless replays that slowed down Lesnar’s shot to Cena’s jaw all underlined the idea that it was “real.” The message that WWE was sending through the story was that this time — not any other time, but this time — it wasn’t fake. WWE was taking on MMA on its own terms, and by its own admission, it didn’t have a chance.

And from there, it continued: Lesnar, by all accounts, was fighting like the UFC. But in the end, Cena endured. No matter how bloody he was, he kept on taking the beating, until he finally overcame what genuinely felt like impossible odds, because of the way they’d sold the conflict to us. And Cena, a wrestler, did it with a wrestling move, in front of a crowd of wrestling fans. Whether you’re a fan of Cena’s or not, the message of that storytelling was incredible. It was a triumph of narrative, not for Cena the wrestler, but for Cena the character. WWE had created a story that made him an underdog, and by extension, made the entire company an underdog too. They’d brought the conflicts of the industry into the ring, presenting them in a way that made the WWE’s own victories and losses matter less than the fact that they’ve endured.

Chris Sims is the senior writer for ComicsAlliance.com. He knows more about Batman than any man alive.