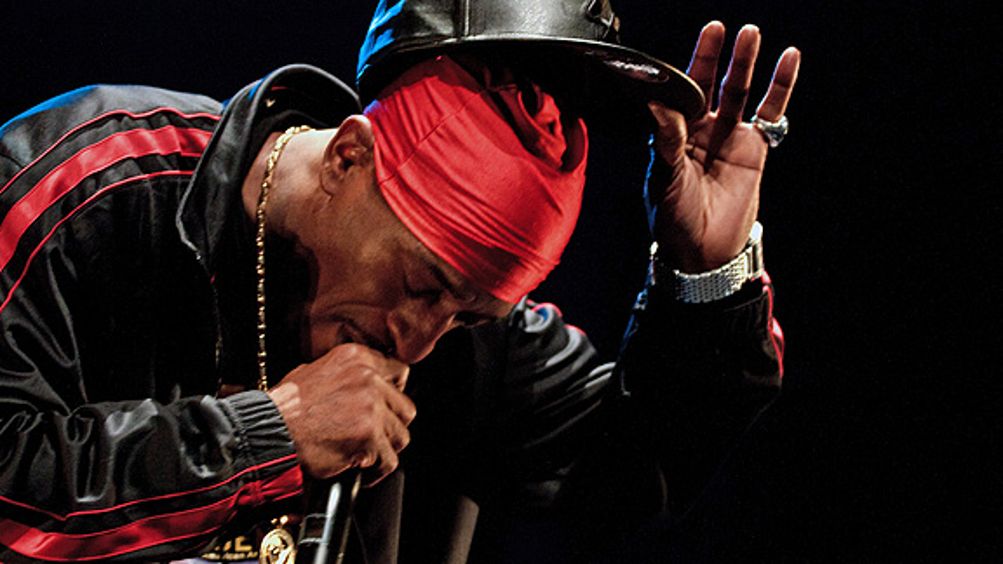 The commemorative, one-time-only T-shirt declared this the 25th anniversary of Eric B. and Rakim’s debut album, Paid in Full. A humid summer day and a sturdy cross-section of New York circa 2011 had shown up to Central Park to celebrate: fathers in Air Jordans and baggy Justin Tuck jerseys; tourists, safe within the SummerStage walls, unashamedly brandishing their guide books and survivalist backpacks; Japanese hipsters overstaying their student visas; lawyers in off-duty heather grey; New Jersey expats, reliving the braver days of youth; many who had stopped listening to rap in the mid-1990s; and a shuffling, rummaging minority who seemed to have stopped showering in the early 2000s.

It felt like a variation on that old Zen koan: Does anything really happen if nobody decides to commemorate it years later? It sometimes seems like the only way of measuring the pop cultural present is via its year-by-year relationship with the past, all those breakups and makeups, deluxe commemorative editions and anniversaries, deserved and otherwise. The river of time is divided into intelligible segments — eras, epochs, generations — and we are reminded that MTV, Nirvana, or 9/11 each anticipated our present. Rarely do we need to be reminded that something happened in the first place, which is what made this event so peculiar, as though we were all living outside of official time. Hip-hop nostalgia is a special, aching kind of affliction, a prideful fetish for lost causes, martyrs, footnotes, movements forgotten. In this way, the afternoon wasn’t a celebration of what hip-hop had become so much as a reminder that Paid in Full had once happened at all.

As the crowds filed in during the early afternoon, Funkmaster Flex played a collection of funk and hip-hop from the 1970s through the early ’90s, adding an exclamatory growl or grunt when the spirit caught him. “New York: was that that shit?” he bellowed over the cheerful boogie of Central Line’s “Walking into Sunshine.” Liberated, if for an hour, from the demands of his day job at Hot 97, Flex played the part of the old-school empathizer, chastising the crowd each time they didn’t instantly recognize one of this selections. “I personally never doubted Flex,” I overheard one satisfied fan confess to his companion, as Flex played to the crowd: “Twenty-five and over, where you at?” “This is for the 30-plus!” He mixed out of the 1987 anthem “Top Billin'” after the first verse, but a cadre of Audio Two devotees sitting in the bleachers chose to complete the song en masse, a capella, drowning out Flex’s next selection (Keni Burke’s “Risin’ to the Top”).

These were rare moments of mass remembering, a crowd’s collective wish to will itself back toward the days of consensus. “The only song you can do the running man to,” Flex shrieked as he dropped Bell Biv DeVoe’s “Poison.” Such sketches of peace and good vibes would have been unimaginable in the 1986 of Paid in Full — that summer, the “Preppie Killer,” among untold others, stalked this park. But maybe that’s the point. Our sense of the past and its importance to us changes with each passing year, as it becomes further distant; as the past is safely past. “BX, don’t lie,” Flex boomed. “We were always afraid to go to Brooklyn back then.” Behind me, a guy muttered to his friend: “I wasn’t afraid.”

Onstage, EPMD amicably jogged through their opening spot. “Back in 1991, two rappers came out. Vanilla Ice and MC Hammer came out,” Erick Sermon said with a laugh, by way of introducing their next song: “Crossover,” an attempt to sell just enough without selling out. “Nothing against no one else — but we love that New York shit,” Ralph McDaniels, the afternoon’s emcee, declared during an intermission, and by “New York shit” he clearly meant an aesthetic that comes to seem more remote and provincial by the year.

Stage right, everyone kept craning to see if Rakim had arrived yet. It occurred to me that I had never seen Rakim — that I had read or watched very few interviews with him. In a way, maybe this was to preserve his myth. Paid in Full and its classic singles represent a high point in hip-hop, as Rakim’s nimble, double-stuffed verses rediagrammed the possibilities of language. But it wasn’t merely the music. It was the grand gesture of gamesmanship, back when one’s authority could be premised on who made the best music about music. It was the fact that one could render everyone else obsolete. Each year that those records grow older, Rakim’s singular nature reveals itself in new ways.

Everyone mingling backstage stopped what they were doing; an opening formed and then widened. Cameras seemed to materialize from thin air as Rakim swaggered through the crowd toward a trailer in the back. He seemed to be a slow-moving statue, unfazed by the throng which sought to absorb him, never blinking amidst all the flashing smartphones, still and composed while others around him heaved to stay apace. I imagine that this is what it might be like to see the president if the president rarely ever bothered to leave the house. People were drawn to his aura, yet careful to jump out of his way as he approached. In that moment, the nickname “God MC” made sense.

Nostalgia is always a willful misremembering of the past, a yearning for an idyllic yesterday (and, by extension, tomorrow) that never could be. The afternoon was a strange reminder of how alone Rakim once stood — how uninterested in the possibilities of strategy or alliance a previous era had been. How mysterious he remained — about his differences with Eric B. (who was absent this afternoon), his fear of flying, how he had spent the past decade of his career, or why he had filmed that utterly bizarre commercial for gold teeth. We were there to bear witness to selected years of his back catalogue, to admire a previous moment’s limited vision, to revisit the simplicity of life through younger eyes.

Paid in Full and its classic singles represent a high point in hip-hop, as Rakim’s nimble, double-stuffed verses rediagrammed the possibilities of language.

A track from Rakim’s latest album, The Seventh Seal, hung in the air — stale, unloved — even worse, unrecognized. Rakim’s partner, DJ Tech, assured us we could find it on iTunes. It was fast becoming clear that this was not, as the commemorative T-shirts touted, a celebration of Paid in Full so much as it was just another Rakim gig, which was perfectly fine. His breath control was superb and his verses sounded impossibly lean and modern. He ran through some classics and some songs that only the die-hards had ever heard before. He and Tech invited EPMD’s DJ Scratch onstage, and they launched into a rousing set — three-man, bob-and-weave DJ tricks — a kind of showmanship that predated even Rakim’s hypercompetitive 1980s. He invited two guests onstage: First, Peter Gunz, plastic cup and cigar in one hand, microphone in the other, did his half of the 1997 hit “Déjà Vu (Uptown Baby).” Later, Cormega jumped onstage and did his verse from “Affirmative Action.” A bunch of guys in matching T-shirts touting a new rapper named King Myers mingled onstage, ready for a turn were it to materialize.

As Rakim assaulted another of his classics, a man in front of me in a plain tee, baggy shorts, and white Nikes turned to a teenager, who wore a teal baseball cap, boat shoes, slim trousers, and a backpack: “That’s what I’m sayin'” he yelled in the boy’s ear, chiding him for his allegiance to Young Money and Lil Wayne and declaring that this was what he should be listening to.

A few days later, the new album from Wayne, one of our consistently ambitious stars, leaked to minor fanfare. It is an underwhelming hour of music, highlighted by some stirring guest verses (the interlude featuring Andre 3000), an errant shot at Jay-Z (“It’s Good”), and the odd symmetry of having songs called “How to Love” and “How to Hate.” At times it feels a tribute to Wayne’s own considerable influence: His protégé Drake assists on “She Will,” and Cory Gunz, who goes for broke on “6 Foot 7 Foot,” decides to mimic Wayne rather than his aforementioned father, Peter.

Carter IV isn’t a bad album so much as it’s unmemorable. His cheeky rasp is in fine form; he sounds as eager as usual to please; and the ratio of singing to rapping has finally achieved a kind of equilibrium. Perhaps the disappointment of this fourth installment of Wayne’s loose Carter series is a sign of the expectations that have resulted from a remarkable mid-2000s run when Wayne seemed to have a pathological need to rap. But with success has come a fascination with pleasures beyond the lyrical: electric guitars, skateboarding, gracious appearances on ESPN. To be a king nowadays, as Wayne, Jay-Z, and Kanye West have shown, is to comprehend the limitless uses of your image — to circulate beyond the music.

In this way, the past stays past, for there are only so many opportunities in one’s life when Rakim emerges from the lab, the ether, or wherever it is he spends most of his days. On this evening, the man in Nikes embraced the kid in boat shoes tightly, on some tough-love shit, and dashed backstage, leaving the kid looking around, more embarrassed than anything. Moments like this played out all throughout the amphitheater: parents doing the Smurf, the wop, the baseball bat, teens shrugging with bemusement at the oldies in the air.

Previously from Hua Hsu:
Never Been in a Riot
Watch the Throne: Let Them Eat Cake