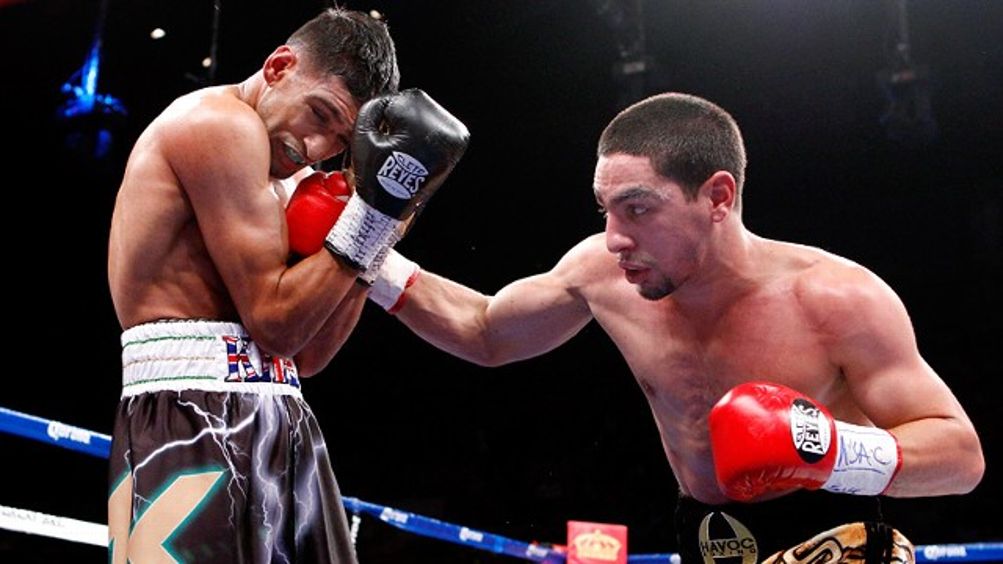 In boxing, success oftentimes comes down to what you can see coming and what you can’t. Over the course of his 29-bout professional career, Amir Khan has vacillated wildly between clairvoyance and a thudding, dull-headed myopia. He has stood in, ably and eloquently, as the great hope for millions of Muslims, both in England and around the world. He has acted priggish and entitled and has been involved in every sort of motor vehicle trouble, including a 2006 accident that shattered the leg of a pedestrian who would later drink himself to death. His fighting style — aggressive, fast-as-all-hell, but ultimately light-fisted — is strangely reminiscent of a lesser Thomas Pynchon novel, in which the prose sparkles and the plot tunnels itself into unexpected, thrilling spaces, but the characters and the heart of the story never quite make it off the page. At his best, Khan is all vision — his foot and hand speed offer him access to angles and openings that a slower fighter could never see. At his worst, Khan’s aggression shades a bit too wild, a bit too cocky, and it leaves him vulnerable to massive counter shots. Like all exciting fighters, Khan displays both his best and his worst in nearly every fight. This dizzying style and Khan’s exalted status among his fans have turned him into an international superstar and one of the most visible fighters in the sport.

Nobody saw Danny Garcia coming. He entered the ring on Saturday night as a 5:1 underdog with only one arguably impressive line on his résumé — a unanimous-decision victory over the then-35-year-old Mexican legend Erik Morales. Despite clearly winning the fight, Garcia revealed no elite skills — his power didn’t bother Morales (to be fair, Manny Pacquiao is the only man on the planet to consistently bother Erik Morales), he plodded clumsily around the ring. His timing and speed seemed pedestrian. There was nothing inherently compelling about his story. Garcia seemed destined to be a forever contender — the sort of fighter who can look good against mediocre or even good opponents, but can’t ever show up when real fame and pay-per-view money are on the line. No major boxing pundit picked Garcia to win the fight. After the second round, in which Khan opened up a gash over Garcia’s eye, you’d be hard-pressed to find anyone willing to take 20:1 odds on a Garcia victory, much less 5:1. The best Khan had shown up. But as early as the first round, the worst Khan had already begun to signal his arrival.

Boxing owes both the English language and common decency an apology for all the stupid sentences that get spat out during the buildup to fights. It’s true that the nationalistic pride that accompanies a great champion is vital to the health of the sport — Puerto Rico versus Mexico will always mean a little bit more. There will always be more hope than is deserved around the next Great White Hope. But when Angel Garcia, Danny’s father, said, “I ain’t never met a Pakistani that can fight,” he was treading, albeit dumbly and heavily, on the line between boxing’s scorched-earth policy regarding political correctness and something uglier. And when he followed that up with, “I know Khan’s god already. And his god is a punishing god. My god is a loving god,” he didn’t cross the line so much as zip down his fly and piss all over any semblance of decency and sportsmanship. He was also pissing on his son, who will now have to manage his father’s sideshow, which will surely grow more outrageous and more stupid with every passing justification and rationalization.

After the fight, Khan’s trainer Freddie Roach credited the elder Garcia for successfully baiting Khan into a slugfest, saying, “Mr. Garcia got under [Khan’s] skin and his heart got in the way.” It’s impossible to know whether Khan’s choice to stand flat and trade blows with Danny Garcia came from his anger over Angel Garcia’s comments, a desire to score a knockout after losing a controversial decision to Lamont Peterson last December, or a desire to rack up early points against an opponent who has been a slow starter throughout his career. Whatever the reason, when Khan came out swinging, he put himself at great risk. He kept his hands low. He used his elbows and head in the clinch and swung wildly at Garcia’s head. When he bothered to take a step back and box, he tattooed Garcia with combinations.

But he wasn’t really hurting Garcia, either. And as Garcia stood up to more and more punches and as Khan’s confidence/anger swelled into a manic dervish of wild power shots, it became pretty clear that Amir Khan was going to get caught. The question lay with Garcia — when he finally did break through, would it be enough?

Amir Khan never saw the left hook. He was busy throwing a left hook-right uppercut combination. As both punches grazed by their target, Garcia was twisting himself up like Super Macho Man for one massive haymaker of a left hook that thudded into the side of Khan’s neck. After a prolonged zombie-step, Khan went sprawling back onto the canvas. He got up on wobbly legs and feigned just enough composure to convince referee Kenny Bayless to let him continue for the last 18 seconds of the round. Garcia, who had been lazing back almost comically on the ropes as Khan was trying to answer the count, rushed forward and tried to make good on his prediction that he’d knock out Khan in the third. Khan stayed up through sheer survival instinct and continued to flail around well after the bell had rung. The decision to let the fight continue will be debated for a while, but when Freddie Roach decided to send his fighter back into the ring, the fight devolved into a glorious, dangerous, and heart-rending mess, the sort of spectacle that makes girlfriends and wives look away from the television in disgust and reevaluate the moral fiber of their men. At the start of the fourth round, Garcia chopped down Khan with two huge right hands. Within seven seconds, Khan was stumbling backward for his life. Bayless had to jump on Garcia’s back to prevent him from landing any more shots on his defenseless opponent.

After the standing eight count, Bayless grabbed ahold of Khan’s gloves and pulled the dizzy fighter back toward the center of the ring. A grim panic fell over me. It was the deep, calm panic that usually accompanies a terrible yet inevitable trauma. Maybe I was the only person in the world who thought that there was a chance, however small, that Amir Khan might die in the ring, but I doubt it. Danny Garcia landed five punches in the fourth round that could have knocked out any reasonable light welterweight. When Khan put up his gloves to protect his face, he posed such little threat that Garcia was able to wind up, aim his fist, and throw it with full force into the side of Khan’s head. Nobody likes to see a bad stoppage, and it’s worth wondering if Khan could have survived the remaining 38 seconds in the fourth round. But there’s a point in every beating where the damage just sounds permanent, where you, as a spectator, start doing the awful math that balances your enjoyment of the sport with the irrefutable proof that a man’s life has just gotten considerably shorter. The fourth round of Garcia-Khan was bloody with those sickening, calculable sounds.

On Saturday night, Danny Garcia knocked Amir Khan out with a shot that Khan would later rightfully describe as “blind.” But despite the win, we really don’t know much more about Garcia than we did before the fight. It’s true — Garcia stood up well against Khan’s assaults, and he had been setting up the haymaker since the first round. But big punches happen, and they rarely tilt the axis of the boxing world for very long. (See: Mosley, Shane v. Mayweather, Floyd.) And big punches tend to connect against Amir Khan’s chin, which went from “improving” right back down to “suspect” in the course of three brutal minutes. To usher Garcia into the superstar ranks because he caught Khan would be about as foolhardy as lionizing James Kirkland because he knocked out Alfredo Angulo in a similarly thrilling match last year.

But the boxing public also learned a great deal about Amir Khan’s heart, and, sadly, the limitations of his much-vaunted skills. His lack of stopping power can no longer be explained away. The question “Can Khan move up in weight?” has been answered with a resounding “No.” But by standing and fighting when any reasonable fighter would have gone down, by pushing the boxing public past the limits of their comfort, Amir Khan did exactly what he said he would do in his own press conference. He showed “what a Pakistani British fighter can do.” He, of course, did not owe anyone the exhibition, but within boxing’s old, racialized calculus, everyone can now reference “Khan” when they ask, in the words of Angel Garcia, whether or not they “ain’t never met no Pakistani that can fight.”