Giants-49ers: Going Back to Cali

Kickoff: Madden NFL and the Future of Video Game Sports 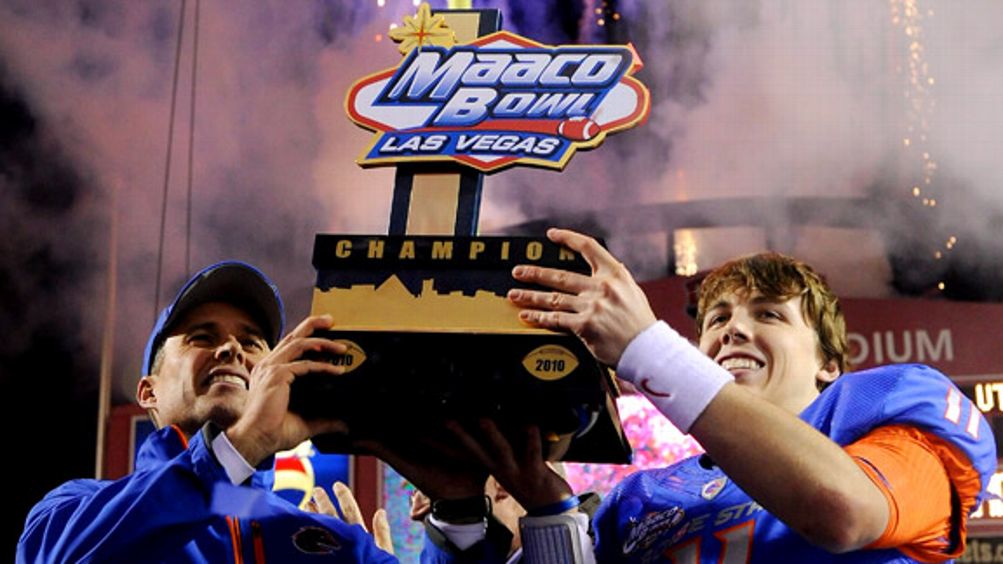 The formation of four 16-team so-called superconferences would end college sports as we know it. It can’t happen soon enough.

College sports made marginal sense at the get-go a century and a half back, and they make even less sense now. They are a “historical accident.”1 They lead a “schizophrenic existence.”2 They have a “fundamental contradiction of being.”3 Talk of reform is therefore sort of folly on face. How to “fix” college sports? Easy. Eliminate them. No other country in the world does this.4 Uncouple academic advancement from athletic enhancement. Or at least abolish athletic scholarships and make everything Division III.

Obviously, though, neither one of those things is going to happen. Too many people are making too much money or want to. The system is too entrenched.

Here’s the argument for superconferences: The BCS would die.

No need to expound here on the ways in which the BCS is an unjust farce. Suffice it to say the current method of selection of college football’s “national champion” is determined by one cartel (the BCS) loosely affiliated with another (the NCAA). Go team.

Some discussions about the possibility of superconferences involve the schools breaking away from the NCAA. Careful. Outright secession would be unwise.

The superconferences could threaten secession, and probably should, and almost certainly will, but secession would be a real hassle when they can just band together and strong-arm the association while still using it for its established infrastructural advantages. Affiliation is important. The NCAA remains the publicly endorsed auspices under which member schools can keep player compensation artificially low. Break away from the NCAA, and that could lead to a loss of legal loopholes, which would trigger the potential necessity of total, transparent payment of labor. Those schools don’t want that. Way too expensive.

But this concentration of power inevitably would lead to a loosening of rules for those top 64 schools. Those $2,000-a-year cost-of-attendance stipends? Knock ’em up a bit. Various eligibility standards? Knock ’em down a bit. The NCAA wouldn’t say no because the NCAA would know who’s in charge.

One result of this superconference setup, then, would be at least some sort of pay for play, a more honest, more defensible version of “big-time” college sports — the start, at least, of what longtime critic Murray Sperber calls “punting the pretend.”

Big-bucks lightning strikes are college sports’ alluring illusion. That’s all they are. The vast majority of even Division I schools lose money.

“There are always going to be schools who are going to want to be a part of that highest level,” said Welch Suggs, a journalism professor at the University of Georgia and an expert in the business of college sports, “no matter what it costs, no matter how it disadvantages them.”

Which means they need help making the right choices.

This is that help.

The creation of superconferences would let all the other schools — nos. 65 to 300-plus in the Division I hierarchy — basically stop trying to keep up with the Joneses and get back to more responsible athletic expenditures in a system that looks more like Division III.

“It finally would provide a way for those other teams to gracefully exit the rat race,” said John Gerdy, the author of Air Ball: American Education’s Failed Experiment with Elite Athletics and a former SEC associate commissioner for compliance and academic affairs.

Sperber saw this coming. In 1990, in College Sports Inc., he wrote:

“… the hundreds of athletic have-nots will have to decide whether to abandon their dreams of big-time sports glory or to throw more money into their attempts to compete with the elite. In the worst-case scenario, most of the also-rans will pursue the athletic chimera. In a more positive outcome, most will come to their senses and scale down their sports programs, returning them to their real students.”

North Texas could stop trying to be Texas. A long shot would turn into no shot.

Would four 16-team superconferences bring in more money than the conferences the way they are now? Maybe. But maybe not. Would this work for football only? Football and men’s basketball only? What if it didn’t include all the other sports, especially women’s sports, that are such money sucks? Could it? Wouldn’t that open the schools to additional scrutiny of the already shaky legal standing of the entire enterprise of college sports that wants to be simultaneously amateur and commercial? Yes. Of course it would. So: Title IX issues? And antitrust issues? And workers’ comp issues? And tax-exempt status issues? And coming courtroom challenges with heavy implications? What about congressional subcommittees? Questions to consider. People have been predicting for decades that TV rights fees for sports can’t possibly keep going up. They keep going up.5 But will state budget cuts keep hitting higher ed? Will tuition keep going up? Student activity fees that go toward supporting sports? Coaches getting huge raises when professors aren’t getting any at all? When will students start protesting? Will they? Why aren’t they? And what happens when even more research piles up showing that football wrecks brains? How long can institutions of education continue to sponsor an activity that not only doesn’t improve their students’ intellectual potential but actually and demonstrably worsens it? Worth pondering in any reconsideration of college sports.

Guaranteed: The status quo will not stand.

Some point to Pitt and Syracuse in the ACC and Texas A&M and Missouri in the SEC and Boise State and San Diego State in the Big East, and they call all this an unseemly cash grab.6 They see something that’s ugly. Chaos, they cry.

But if it leads to four increasingly semi-professional superconferences and de-emphasis elsewhere, Gerdy said, “I think it’s a positive reform.”

“It seems to me at this point to be almost inevitable,” Michael Oriard said last month from his office at Oregon State, where he’s an associate dean and writes books about sports and football in America.7

It’s the beginning of the end. That’s progress.

Michael Kruse is a staff writer at the Tampa Bay Times and a contributing writer for Grantland. Follow him on Twitter at @michaelkruse.