The Reducer, Week 21: And Out Come the Swans 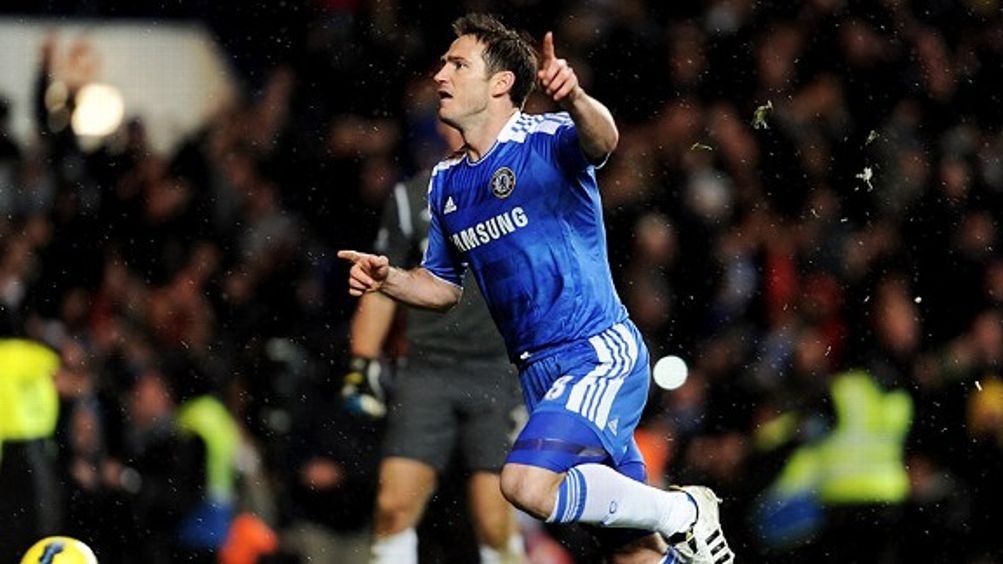 In this day and age, with the proliferation of Continental coaches and international players in the Premier League, with Nicolas Anelka going to China, Joey Barton listening to Bon Iver, and the league’s top team funded by the royal family of Abu Dhabi, led by an Italian manager and starring an Ivorian, an Argentinian, a Spaniard, and a Ghanaian-born Italian, the question needs to be asked … what is English football?

There was a time when that answer was obvious. English football was all about defenders’ heads wrapped in bloody bandages, uniforms covered in mud, pitches that looked plowed, wingers bombing up the flanks, and colossal headers blasted past colossus keepers. The players were named George, Terry, and Tony. They kicked heavy soccer balls made of leather from stoic Yorkshire cattle. They put their faces in front of blistering shots and consumed warm lager and fried fish at halftime.

For whatever reason — blame it on the drop in temperature or the moon being in the House of Allardyce — the English Premier League seemed very … English this weekend. A lot of blood, guts, thunder, aerial balls, players being flipped into the air, crosses, headers, and set pieces in the rain. Let’s take a look at some of the British steel on display.

One of the best presents any Arsenal fan got for their club’s 125th birthday, which was celebrated in fine style over the weekend, was the knowledge that their 2003-04 side would continue to be the only Premier League team known as “The Invincibles.” And that present, strangely enough, came courtesy of Chelsea, who beat Manchester City, 2-1, in the pouring rain.

Blues boss Andre Villas-Boas, despite comporting himself in the press like an off-meds Carrie Mathison, has somehow righted the ship at Stamford Bridge. I say “somehow” like it’s a mystery. Really, the first-year Portuguese boss has gone back to the things that have always worked for Chelsea over the last 10 years; be aggressive, be physical, drive forward, and let Didier Drogba cook.

Played under the floodlights, in the rain, like this one was, played at 100 mph with 100 percent commitment, matches tend to turn on a piece of luck. With the amount David Silva was being kicked (which I really hope doesn’t become a strategy for the second half of the season), the result could have just as easily gone City’s way.

But it didn’t, and in this league, to some extent, you make your own luck. In wins against Newcastle, Valencia, and City, Villas-Boas has relieved some of the pressure on his jumpy defense by starting them out in a deeper position; asking them to soak up attacks rather than head them off. The Blues started a trio of terriers in midfield — Romeu, Raul Meireles, and Ramires — who hounded and harassed Yaya Toure to the point where the Ivorian central midfielder looked cooked after an hour.

Neither goal was scored by Didier Drogba, but he seemed to constantly be involved; dropping deep to help his midfield in possession, breaking off to the wing, pulling a centre-back out of position, or just generally being a handful.

What did we learn from this match?

• It’s better for Roberto Mancini when Mario Balotelli plays with a kind of “You mad cause I’m stylin’ on you” detachment, because, toward the end of the match, when he started showing his frustration, he seemed primed for a card

• Chelsea might have provided something of an alternative blueprint on how to defeat City. If Napoli showed that the Etihad boys were vulnerable to the counter, Chelsea showed that just keeping things close and putting the onus on Joleon Lescott and Gael Clichy to not make mistakes is an equally viable game plan.

• Or you could just kick Silva.

• To his credit, Silva didn’t seem overly concerned about the amount of hip-checks and high boots he was taking. My favorite moment of the match came later on, when he and his former Valencia teammate Juan Mata held a conversation while holding their hands over their mouths.

• They were probably talking about Fernando Torres, who spent the entire night in the pissing rain and only really looked like he was coming on when Drogba picked up one of his “only a flesh wound” ankle injuries.

One of my favorite movies to watch as a kid was the Stephen King directorial effort Maximum Overdrive. In the film, machines have taken over the Earth, leaving a random group of people to fend for themselves at a North Carolina truck stop while big rigs and 18-wheelers menace and destroy all around them.

I always think of this movie when watching Stoke and how long-haul sons of bitches like Robert Huth and Ryan Shawcross can make any opposing football team look like a bunch of cowering mortals, seeking shelter in a truck stop.

Within the first few moments of Tottenham and Stoke’s Brittania Stadium clash there were already multiple midair collisions, a long throw that nearly resulted in a goal, a robust Gareth Bale toppling, and the sight of Stoke forward and the World’s Angriest-Looking Man, Jon Walters, jumping out of his own boots.

Even when Tottenham got something resembling football going, they couldn’t match Stoke’s all-last-ditch-all-the-time style of defending.

In the tenth minute, Gareth Bale broke on the Potters after Rafael van der Vaart redirected a one-touch pass from Emmanuel Adebayor. Bale, standing on the verge of getting it on, lining up Lennon for the cross, let the ball go and then … Huth! There he was (shoot me in the face). Robert Huth threw his entire body and soul in front of the ball, somersaulting into goal and earning a delirious response from the Stoke faithful.

Every game has its own internal rhythm dictated by a myriad of factors; weather, time of kickoff, last match played by either side, and the permissive or restrictive streaks of whatever referee is watching over the proceedings. Sometimes you get a free-flowing, if physical, game. Sometimes you are slowly killed by 1,000 blown whistles. Stoke do something incredibly smart (and a bit cynical) when they play: so physical is their style, so tenacious, that to call every foul would stop the match dead in its tracks.

That’s not a complaint, per se. I don’t actively enjoy watching Stoke play, but I do respect it. They game the system in the best way they can. Manchester City do it by spending the GDP of Tunisia on signing Serbian defenders and then consigning them to the reserves. Stoke do it by coaching up a bunch of dudes that are three Snickers bars away from being Sloth from Goonies. Whatever works.

While I’m sure Scott Parker has the bruises to prove otherwise, this match won’t be remembered for any Earth-scorching tackles as much as it will be for its flawed officiating. Referee Chris Foy failed to see one and a half handballs, allowed a bad offside call to go through, and sent off Younes Kaboul after the Spurs defender nicked Walters. It was sort of hilarious to watch Walters gesticulate wildly after his tumble, given the fact that the Stoke fans had been frothing at the mouth, screaming “CHEAT” at Scott Parker after Walters shoved him to the ground early in the match and booing Luka Modric because he had the temerity to get kicked in the box, leading to Adebayor’s penalty shot and Tottenham’s only goal.

I know all football fans are unhappy in their own way, but Stoke’s support can certainly seem pretty rabid when they get the bit between their teeth.

After the match, Spurs boss Harry Redknapp tried being sanguine about the tough decisions his squad faced: “I never complain about referees’ decisions.” He then proceeded to vociferously complain about the referee’s decisions (for even more vintage: “I just felt like he was quite enjoying not giving us anything”). In the end, what can you do? Forget it, Harry. It’s Stoketown. (For more instant vintage winery from Harrry, check Quote of the Week.)

• Martin O’Neil has been lauded as a master motivator and something of a cup-play expert. He’s also been knocked for being a total flake and overpaying for past-their-sell-by-date players. Upon being hired at Sunderland, there were a lot of “Martin O’Neil Is Overrated” articles in the British press. And for 84 minutes of the Black Cats’ match against lowly Blackburn, those articles seemed right on. But then, with one David Vaughan wonder strike and a typically physics-shattering free kick from Seb Larsson, we saw the O’Neil Effect: At least in the early days, his team plays for him and that team’s fans don’t give up. Two seasons from now, when Emile Heskey is leading Sunderland’s line in one of these, everyone will be shaking their heads and O’Neil will probably jailbreak from the Northeast with his cell phone turned off. But until then it should be a hell of a show in Sunderland.

• Shout-out to Norwich, who took advantage of an anemic and banged-up Newcastle backline to score four goals, most of which came from crosses into the box, finished by the big-man-bald-man combo of Grant Holt and Steve Morison.

Mario Goetze to Arsenal probably won’t happen since he tore a thigh muscle and is out until at least the New Year. This should allow Arsene Wenger to concentrate on what he really needs: a left-back. Andre Santos is out for several months with an ankle injury and Kieran Gibbs is made of origami paper … Liverpool are apparently kicking the tires of Real Sociedad’s Inigo Martine, who could go a long way toward replacing Xabi Alonso’s long, long, long range shooting ability … Now back in the title race with City’s loss, it will be interesting to see if Sir Alex Ferguson can loosen the Glazers’ purse strings to buy a centre-back (Nemanja Vidic is out for a few months with a knee injury) and a creative central midfielder who could take the pressure off Wayne Rooney and allow him to play closer to goal. Going out of the Champions League won’t help his shopping list, however (meaning cross Wesley Sneijder off of it).

(1:30 in) I still haven’t decided whether van Persie’s wonder strike against Everton is better than his shin-hit-for-all-time against Charlton. On one hand, the latter has a higher freak-of-nature rating, but this jaw-breaking volley is a completely clean hit. You decide.

On the performance of referee Chris Foy: “He’ll look at it tonight, on TV, when his wife is making him a bacon sandwich and think, ‘Oh fuck me, what have I done there?'” Take a bow, son.