The Reducer, Week 19: Do the Collapse 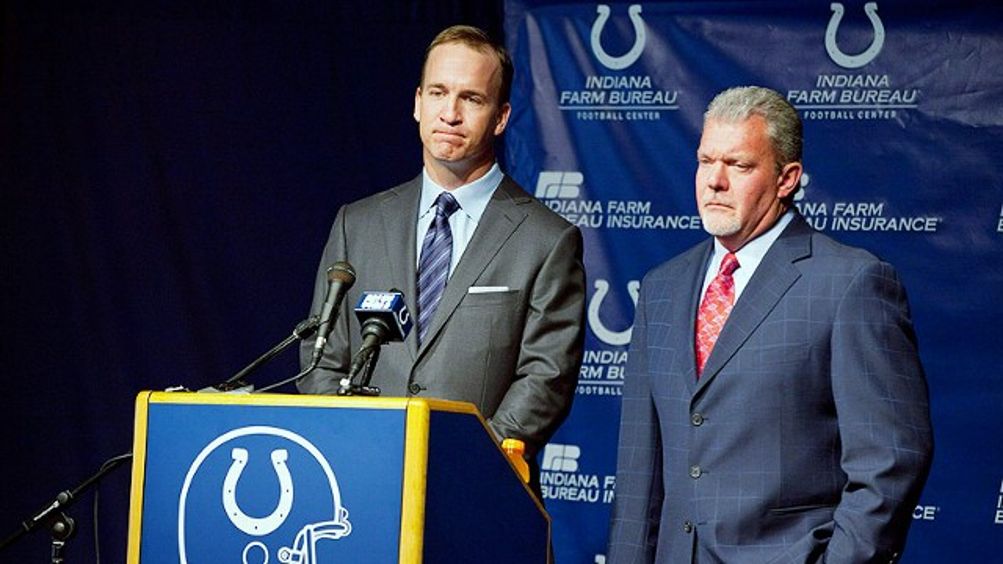 What do you give the man who’s given you everything? Apparently, a press conference to announce that you won’t be giving him anything anymore, that, after a distinguished career of service, you’re laying him off. They say the economy is recovering. They say Americans are getting back to work. But I watched Jim Irsay, the owner of the Indianapolis Colts, break up with his star, Peyton Manning, and I wanted to mail Manning a piece of my job. We now hold press conferences for this sort of thing, which is surreal, but as divorce announcements go, this one was classy. It didn’t have a title or drama or a cast of anonymous kids trucked in from the nearest Boys & Girls Club. No one released a dove or a new hit single. It was just two men, their suits, and the tears they fought.

Manning and Irsay took the stage, which had been adorned with a crinkled, blue paper tarp patterned with the words “Indiana Farm Bureau Insurance” along with, in some spots, the Colts’ horseshoe logo. Manning arrived first — crisp dark suit, pocket square, a tie with stripes in purple and gray. Solemn. Sad. Funereal. Irsay wears a bouncer’s goatee but dressed like the businessman he is: dark-blue windowpane suit, red tie. He choked up, which made you choke up. When Manning spoke, with that endearingly Gumpish congestion of his, he was weepy, too. The tenor of his remarks was “aw shucks.” “I sure have enjoyed being your quarterback,” he said to Indianapolis and, really, in a sense, to America. (How much easier would life be for LeBron James if during his breakup spectacular, which was the opposite of Manning’s more subdued event, he sincerely told Cleveland: You guys made me want to be a better player?)

Obviously, releasing Manning was a big deal, albeit a widely anticipated one. Surgery canceled his 2011 season. He’s 35. And the team needs to put itself in a position to be better than 2-14 without him. The move was made in time to avoid paying him a $28 million bonus. Manning helped resurrect the Colts and made a whole state feel good. He’s a hero, and the news that the hero is changing comic books deserves a podium in a room full of reporters. Still, no press conference in any sport has ever made me feel as if I were watching a Hollywood movie turned upside down. The goodly protagonist arrives at the closing credits with nothing. His brother wins it all (again), and Peyton must bear the awkward arrangement of standing before the country while his employer explains why he’s now his former employer.

That, of course, is Manning’s power: a wealthy man and legendary quarterback from a football family who, as a guy, seems sympathetically, understandably average. In sending Manning on his way, Irsay said something important. No matter what happens to Manning professionally, we won’t experience his like again. He was talking about football (the no. 18 jersey’s been retired by the Colts). But that’s also true of the Manning brand. He has no style. For a man of his stature, in this sport, in this era, that’s almost as incredible an achievement as his football.

Manning is Old Navy and JCPenney. He’s often in khakis and off-the-rack sweaters or in his Colts uniform. He’s been photographed in dad jeans. He sells flat-screen televisions and Oreo cookies and DIRECTV and credit cards. He doesn’t have a cologne or a line of sportswear. Would you believe it if he did? Playing for Indianapolis just made sense. The closest Indiana comes to high fashion is Terre Haute — and that’s just linguistics. There are other no-frills cities in the league. But Green Bay is too quirky. Pittsburgh and Baltimore too in-your-face. The Indianans I know are proud of their basicness, which is not the same as being boring or bland. To be basic is to know what’s important, and when is a pair of $200 jeans important?

For a lot of guys, that basicness was inspiring. It didn’t ask you to be somebody you weren’t, to change. And what a relief. Tom Brady? Mark Sanchez? That’s a lot of pressure — to flaunt and pose and groom. This isn’t to say that Manning is a slob (he’s usually neat; it’s as if you can smell the shower gel). But he’s not a snob, either. There’s no pretense. There are no known stylists. Generally, sports culture should evolve. It should be more progressive and inclusive. Clothes should fit and all of that. But Manning is a poignant reminder that all this progress, all this chic, all this presentation has only a little to do with how most people live. The $28 million aside, there’s little about Manning that seems expensive. He’s a walking argument for simplicity and common sense and modesty — for the old way. He’s still married to his college girlfriend. He’s not all of us, but he’s a lot of us.

And that was the thing about that press conference. Even more than he normally does, Manning appeared to be in pain. It hurt to see him up on that stage. You could feel his heart breaking. The way he stood there, at what essentially was his public firing, in front of that shabby, wrinkled backdrop, it was easy to forget what we were actually watching: a press conference called, in part, to announce that a team was saving a lot of money. With another player, in a different city, the whole thing might have been Trumpy or blingy. But that is the glory of Peyton Manning. He is where bling goes to die. 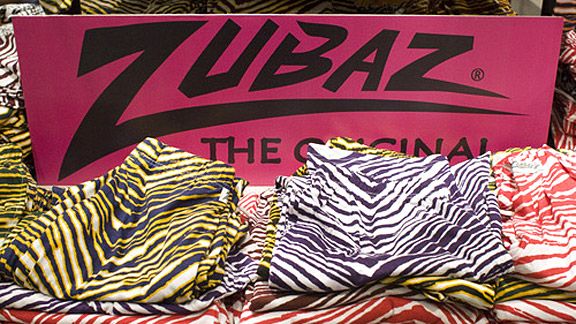 Last week, the New York Times business section ran one of the more ridiculous stories you’re likely to read on the subject of anything. There’s a gym in Manhattan that caters to the extraordinary extraordinarily wealthy. It’s called Sitaras Fitness, and its membership includes such aged 1 percent superstars as Jack Welch, Fred Adler, Paul Volcker, George Soros, and David Geffen. The annual cost starts just south of $14,000. The club has a spacious “digital tracking” room, a kind of holodeck lit in tanning-bed blue, where the owner, John Sitaras, can monitor the progress of its members (at my gym, the trainers just use iPads). And all the emphasis on the impressive fitness of so many seniors made you wonder why Sitaras didn’t just call it Cocoon Fitness.

But that’s not the ridiculous part (New York has fancier, even more exclusive gyms). The story also came with a photo in which Sitaras stood flanked by five of its members, including the venture capitalist and former American Express bigwig James D. Robinson III. Everything about the photo was a dare to roll your eyes. Sitaras, for instance, wore blue sneakers with pylon-orange trim the way guys do who want to be noticed as they walk to the water fountain between every set. Together, they looked like a financial supergroup: Old Money.

But it was Robinson who blew my mind. He wore a tight black T-shirt, and had hiked a pair of Zubaz up to his abdomen. It looked like the pelt of a screensaver was creeping up his body. The piece boasted that Robinson, who’s 76, can leg-press 900 pounds. On Gawker, Hamilton Nolan debunked the leg press, essentially calling it a stupid metric of lower-body strength. Zubaz are pretty dumb, too. It’s possible that Robinson wears these pants every day, but they feel intentional in this photo, as they do when most men choose to put them on. You don’t see them much now, but when you do, you’re overtaken with feelings of Bosworthiness and Hulkamania. The Times piece recalled a time when Sitaras revoked the membership of a well-known high-profile client, who wanted the gym’s soundtrack switched to classical music whenever he worked out. The crime was obnoxiousness, and you half-applaud the move. But can you trust an exclusive gym that hasn’t excluded these pants? 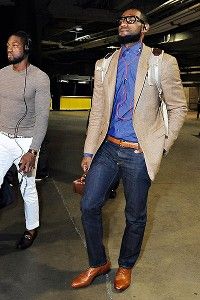 Last week, LeBron James entered Staples Center to face the Lakers. He had one familiar accessory (Dwyane Wade, now in a heathered, tight, long-sleeved crewneck) and one new one: a teeny-tiny leather carryall — or carry-one. Rembert Browne argued here the next day that it was exciting, if only for the embarrassment of retrospect, that James and Wade will look back on it all and laugh. He’s right. But the murse, if that’s what we’re calling James’s bag, feels like a joke. So did Wade’s shirt, his white, cuffed pants, and his black loafers. None of those clothes or the accessories goes with a game face. If you’re going to carry a loaf of bag through the bowels of a sports stadium, it shouldn’t look like torture, like you’re on a runway in Bryant Park at gunpoint. It should look fun, and the love affair between these two has begun to lose that spark of pleasure. They’re now so fashion-forward that they’ve lost the narrative. They’re tipping over. Some reorientation might be called for. They weren’t just in Los Angeles last Sunday. They were in Zoolander.