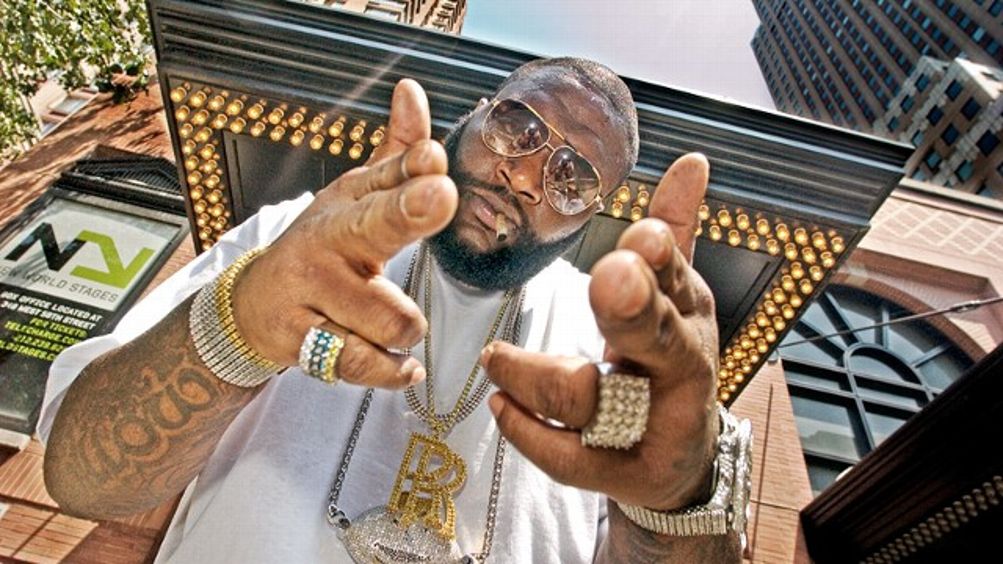 We’re through the looking-glass: Whoever Rick Ross used to be, on his fifth album God Forgives, I Don’t he’s just Rick Ross, who may or may not have once moved weight but unquestionably throws it around. The bawwse is now a for-real boss, able to send talent-in-search-of-a-brand artists like Gunplay and Stalley and Meek Mill to Famous Rapper Space Camp via his Maybach Music Group imprint. (Note the unambiguous major-label corporateness implied by the words “Music Group” — as if MMG were a shell company or an asset-management firm, both of which it sort of is.) Study his Instagram pictures, the way Ross claims his enemies do, and you’ll see him accepting delivery of his second 2013 Maybach coupe (24,000 likes) and showing off his custom-made red python-skin Reebok Pumps. He’s become the kingpin he always claimed to be, and he raps here as a man in full, with a track record and a paper trail and Swiss accounts to prove it, even if they still call him “Mr. Roberts” at the bank.

That’s William Leonard Roberts II, the identity Ross stashed in a Dick Whitman shoebox upon entering the rap game. William Roberts’s résumé, it turned out, included an 18-month stint as a Dade County corrections officer. William Roberts’s job presumably involved incarcerating the same kind of Scarfaces whose life stories Ross would subsequently claim as his own.1 In 2008, when photos of Roberts in uniform surfaced, Ross claimed they were a paste-up job perpetrated by “online hackers,” then avowed, “My life is 100 percent real.”

It was a weirdly semantics-based denial — everyone’s life is 100 percent real, even a fabulist’s2 — and in a different era, his career might have died right there. Instead the revelation that he’d sampled his whole biography barely slowed his momentum, and what got buried instead was a certain romantic/literalist conception of gangsta rap as a nonfiction medium. Ross’s late-’00s feud with 50 Cent (which peaked absurdity-wise when Fiddy commissioned a mocking Web-toon starring a character named “Officer Ricky”) might have been the most purely ideological rap beef of the ’00s. Whatever it was ostensibly about, it was really about an artist who’s spent his entire career coasting on pure shrapnel-scarred street cred objecting on general principles to the success of an artist who’d blithely chosen Street Cred™ as an aesthetic and a rhetorical strategy.

Listening to this song is like watching somebody successfully chisel his face onto Mount Rushmore. Rap game General Zod.

The CO stuff hit the Web between 2008’s Trilla (possible translation: realer than “trill,” a word that itself means “realer than real” — protest much, Officer Ricky?) and 2009’s Deeper Than Rap. A weird thing happened on Deeper. Ross — who’d done a whole lot with nothing but that borrowed backstory and his grumpy-grizzly bark of a voice — suddenly started rapping better, and more vividly. He’d been exposed, nobody aside from preexisting haters really cared, and maybe that felt like the lifting of a burden; maybe it emboldened him to go all-in on the role he’d written for himself, pushing past fiction all the way to fantasy. There are points on God Forgives when he seems to be expressing remorse about all the bad things he probably didn’t do, which is pretty next-level, sliding between the past and present tense and the first and second person like he’s changing lanes. When he says “I can tell you what a dope boy feels like,” he’s really not lying; at this point, maybe he can say it better than a dope boy can.

He also chides his enemies, “Shouldn’t claim the hood till you build a rapport,” and it feels like a wink at his peculiar story arc — by the time The Smoking Gun got its hands on his personnel records, he was a made guy commercially, but also culturally, with an audience that was willing to accept him regardless of where he’d come from. (And in a weird way, it made him easier to love, didn’t it? Rick Ross was just like us, in that he was not exactly Rick Ross.) He walked away from the implosion of his identity and started celebrating, over the most sumptuous and exuberant black-yacht-rock beats new money can buy. Only in America, bitches! Acronyms-of-the-moment to the contrary, you only live twice.

So, OK: Factor out the deluxe-edition bonus tracks — which repurpose the title track and the Nas feature “Triple Beam Dreams” from Rich Forever, an early-2012 mixtape strong enough to count as Ross’s four-point-fifth album — and God Forgives is almost exactly half-great. Around what would have been the flip-the-record-over point on an LP there’s a clot of mean-mugged Lex Lugerish grind-raps produced by people who are not Lex Luger, followed by a splashy R&B-accented victory lap with Usher, Omarion, and Drake lining up to spray the champagne. Both those sections have their moments — the deranged ODB slur Ross affects on the hook to “Hold Me Back,” his priceless “My crib look like a mall / Fired the stylist, went and bought a Big & Tall” boast on “911,” and Pharrell’s rewired “Children’s Story” beat on “Ice Cold.” And while the gross “Diced Pineapples” — which opens with Wale spitting witless Def Poetry double-entendres and somehow manages to go downhill from there — is probably the worst thing Ross has ever signed off on, at least he had the decency to bury it at track 14.

But the great half is pretty astoundingly great. All the real Miami heat is right up front, in the five-song run that starts with “3 Kings,” which bookends a hard-ass Ross verse with scepter-twirling guest spots from Dr. Dre and Jay-Z. Dre is surly and sour, plugging his headphone line and sniping at “magazine n—-s” (for, y’know, expecting him to do something besides endorse headphones); Jay is as watch-me-get-this-in-one-take loose and brilliant as he’s been in years — shouting out Blue Ivy Carter and Robin Williams and dropping a Max B allusion so out-of-nowhere he says “Oh, shit!” and says it again, while still finding time to renegotiate his 360 deal with Live Nation right there on the track (“They talkin’ two hundred fifty! / I’m holdin’ out for three / Two seventy-five and I just might agree”).

The song is a blatant positional statement on Ross’s part. He can create this context and book these guests, therefore he belongs in their company. What’s amazing is that you end up believing it. Way back in 2006, when he rhymed “Atlantic” with “Atlantic” on his breakthrough single “Hustlin’,” people either moaned about how they don’t make ’em like [insert true-MCing paragon’s name here — I don’t know, Chuck D, let’s say] anymore or hailed him semi-ironically as some kind of visionary postlyrical goofball. Here he strings together “weed game,” “Heat game,” “heat, man,” “feet, man,” “D game,” and “C thing” and it just sounds like a signature style; either that or the proximity effect really works, and anything he said between classic3 Dre and classic Jay would have sounded like classic Ross. Anyway: Listening to this song is like watching somebody successfully chisel his face onto Mount Rushmore. Rap game General Zod.

But the balloons don’t really fall from the ceiling until the absurdly resplendent “Maybach Music IV” — that’s “Maybach Roman numeral four,” Ross points out, lest we miss the blockbusterosity. Fat chance: From Ross’s go-to producers the J.U.S.T.I.C.E. League doing for thug-rap what Barry White did for love (extended fuzak guitar intro, Love Boat horn charts, strings, a chorus of quadruple-tracked Ne-Yos singing about dreeeeeeams) all the way to the droll closing shout-out from Ross’s old Def Jam mentor L.A. Reid, this song is practically a Vegas revue unto itself. It’s practically Vegas unto itself. Every note sounds like it’s been poured from a gold bottle or polished on the sleeve of a floor-length mink; Ross doesn’t so much rap over it as swim in it, like a money bin.

“IV” is also noteworthy in that it’s the only time on this record that Ross alludes to the two still-kinda-mysterious sleep-deprivation-related seizures he suffered within six hours on two separate airplanes last fall, and for the blasé way in which he makes that allusion: “Such a breath of fresh air / Get a blow job, have a seizure on a Lear.” Some questions: Is he implying that the seizure was BJ-related? Since Ross would presumably like us to believe he gets fellatio in-flight the way you or I get complimentary peanuts, is he trying to suggest that the seizure was no less routine? Is it weird that, given the opportunity to rap about a momentous thing that actually happened, he blows by it on the way to a reminder that he flies private? Or is textbook death-denial classic Ross, too?

As good as Ross has gotten at putting words together, questions like that remain outside the scope of his art, at least for now. Accordingly, the best song on God Forgives is about limits. The eight-minute running time of “Sixteen,” featuring Andre 3000, promises epic things — Ross’s own “Desolation Rozay,” maybe, or at least his “Pyramids.” We don’t get that, but we do get a lot: some “Flight of the Valkyries” strings, a neon streak of “You Belong to the City” saxophone, Ross comparing himself to John Coltrane, the Last Poets, Mick Jagger, Eric Clapton,4 Ol’ Dirty Bastard, Sammy Davis Jr., Dwight D. Eisenhower, and government cheese, and a sprawling, virtuosically all-over-the-place Andre verse that begins in summer 1988 (“Or was it ’89? Or was it wintertime? Oh, never mind” — take that, facts) before roping in God and Lucifer and Flipper and proclaiming himself a “real merman.”

It’s a moment of supreme creative indulgence in the middle of an album about regular, discontinued-luxury-car-buying indulgence; Three Stacks even whips off an endearingly god-awful guitar solo at the end. A whole Rick Ross album as openhearted and deeper-than-rap expansive as this song is probably too much to wish for. But if the rise and rise of Mr. Roberts has taught us anything, it’s that dreaming small gets you nowhere.