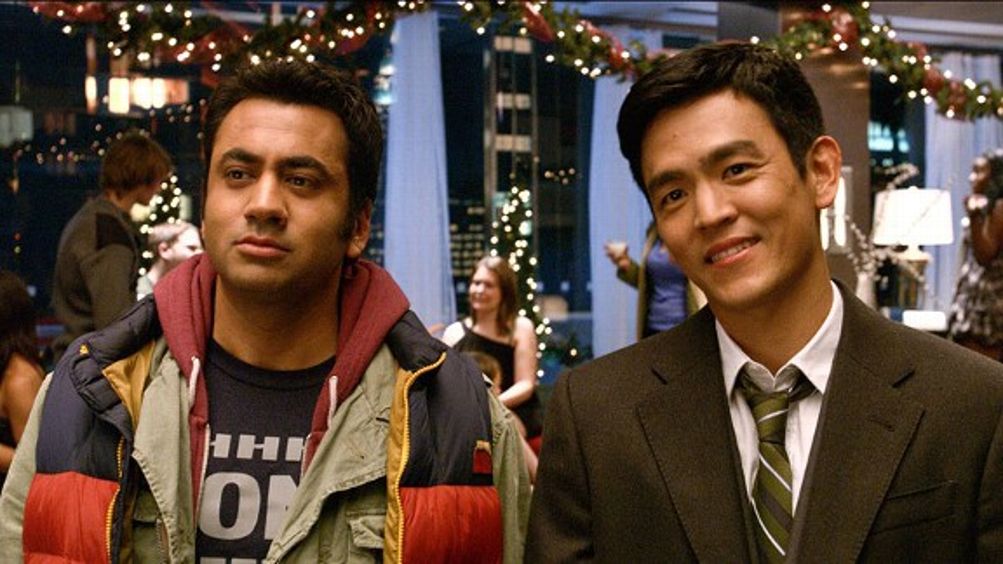 The great challenge of living in a pluralistic society is figuring out an equilibrium: Is it possible to recognize our various differences while pursuing a future of collective aspirations, desires, and possibilities? How might we acknowledge diversity without allowing its mere fact to divide us?

This, perhaps, is where marijuana helps.

In the America of the movies, smoking pot is one of our great social equalizers, a pastime that cuts across lines of race, gender, class, age, educational attainment, even species. For those on the margins, sharing in this common purpose of getting superhigh can accelerate one’s journey toward acceptance and assimilation. Old, worn stereotypes are traded for newer, blissfully vacant ones. Cheech and Chong emerged from a cloud of smoke and became household names; the dark glee of Friday ensured that Ice Cube, snarl and all, was safe for mass consumption. As long as there is college, entire generations of young people will abide, inspired by the mellow enthusiasm of the Dude in The Big Lebowski. And who can forget the boost to Harvard University’s profile that was How High? Such films are Utopian in their own way, with their visions of the simple, pure conviviality of puff-puff-pass, the universal kinship that might spark when one deprioritizes everything else but this moment, man.

Perhaps the most important recent addition to this canon was Harold & Kumar Go to White Castle, which detailed the struggles and woeful, fatally stoned decision-making of two otherwise bright, well-meaning, lightly marginalized friends, Harold Lee (John Cho) and Kumar Patel (Kal Penn), trying to get some burgers. When Harold & Kumar Go to White Castle appeared in 2004, it was the unexpected solution to a long-simmering problem. For decades, questions of representation and visibility had bedeviled Asian-Americans in Hollywood. Yellowface (which is apparently making a comeback!), iffy tales set in the inscrutable “Orient,” bit roles as doctors or nerds or ninjas: This is a history to some, trivia to most. But Harold & Kumar was different. Never had a film with an Asian-American lead — let alone two of them — found such a wide audience.

Harold & Kumar triumphed by ambushing expectations. This was a simple story populated by unlikely characters, including a giant anthropomorphized bag of marijuana and a cheetah. Harold and Kumar were archetypes — the tightly wound Korean-American banker, the Indian-American prodigy content to waste his intellect — unfamiliar to most, and seemingly devoid of storytelling possibilities to the rest.

This was why Harold & Kumar succeeded. It trafficked in difference, but not an exotic, alien kind of difference. It was a difference that was quickly forgotten at the sound of a noisy fart, or in those moments of pure, foggy-brained absurdity. This was still a world where Harold and Kumar were outsiders. But the film’s most aggressive stereotypes were reserved for their enemies: mouth-breathing jocks guzzling energy drinks, oafishly racist cops, politically correct academics, and backwoods weirdos. Rather than dwelling on their marginal status, Harold and Kumar merely bore witness, the clever, everyman stoners whose off-kilter perspectives made them trenchant critics of their small part of the world. There was something secretly fun about their lives.

There is an alternate universe where Harold and Kumar, upon surviving their first run-in with Neil Patrick Harris and a ride on a cheetah, vacation in Amsterdam, return to the States, and embark on a hunt for the late Eazy-E’s mystical stash, aided by clues buried in rap lyrics. These were the original script ideas for the second and third installments of the Harold & Kumar story. Instead of going to Amsterdam, the sequel, Harold & Kumar Escape from Guantanamo Bay, brought them to the infamous detention center, the result of Kumar’s cavalier attitude toward post-9/11 airline security and the efforts of an overzealous citizenry. But if Guantanamo‘s occasionally brilliant satirization of the War on Terror proved to be a more interesting premise than a trip to Amsterdam, then it’s a tragedy that we have A Very Harold & Kumar 3D Christmas rather than the scrapped Eazy-E script, which itself sounds like a plot device in a future Harold & Kumar movie.

3D Christmas marks the end of a respectable run. Perhaps the pressure of fusing a Christmas Eve movie with a stoner movie was too much pressure to bear. Years have passed: Harold and Kumar have gone their separate ways and acquired new, white sidekicks until a mysterious package left on the doorstep of their old apartment reunites them for yet another festival of homosocial bonding. The highlights include a waffle-on-demand robot, the devious return of Harris (who appeared to die in Guantanamo), and a chilling performance by Danny Trejo, who plays Harold’s eternally unimpressed father-in-law; they do not include the actual 3-D of the film itself, which is only evocative in those rare moments when a plume of smoke seems to dissolve in the empty theater. Of the myriad issues that plague 3D Christmas, the fact that Harold and Kumar spend the entire film sober is most pressing. Instead, there is a baby hiding in a closet from a murderous Ukrainian gangster, passing the time by rubbing cocaine on her gums.

There are two versions of the vaunted “post-racial” dream. The first, which will remain unachievable, imagines a future when we as a society have figured out a fair, just, and universally respectful way to deal with difference, if the very idea still holds at all. In the second version, we are all at the same party, cresting on the same contact high, icing each other ad infinitum. In this way, Harold and Kumar were visionary figures, possessing a new chalice of American identity, one that deemphasized the importance of race.

They arrived at a moment when it was still unusual to suggest that lifestyle choices and taste preferences could take precedent over the other, more elemental facets of one’s identity — that we could be cleaved into market segments rather than races, regions, ethnicities, genders, etc. Just as bros or hipsters became the perfect embodiment of this aughts logic, Harold and Kumar were offered as stoners rather than as Asian-Americans. But the relationship between the various raw materials of who they were could not be forgotten: These were outsiders who seemed to embody the momentary lucidity of being stoned, when the true shape of things might be apprehended, if fleetingly — they just happened to be Asian. Years later, we have Tom Haverford (Aziz Ansari) on Parks and Recreation and Ben Chang (Ken Jeong) on Community, characters who are subversively, knowingly funny, and who also scramble our expectations for ethnic humor.

Someone once asked me if I was Harold. This was a few years ago, before the sequels, when the original film was slowly establishing itself as a cult hit on DVD. I was waiting for the subway when the pastiest of a posse of 15-year-olds timidly approached and asked if I was the actor from Harold & Kumar. It was late and I was tired, so my reply was terse: Are you serious? His apology was quick and authentic, and I realized that he had, indeed, been serious. Crestfallen, he returned to the friends who had dispatched him my way, informing them that I was not Harold. They insisted I was lying, but he shushed them away, further down the platform.

There is a novel thrill to seeing someone who looks like you on television or in the movies, and if this has never occurred to you, then it’s probably because you’ve never had to think about it. Whether it is the Oval Office or a sitcom, there are certain settings where we’ve grown unaccustomed to difference. The consequences of such interruptions might be fleeting and vague — Penn, for example, has recently spoken on his difficulties finding interesting roles. But this is what keeps popular culture engaging and unpredictable to those of us who follow it. It is difficult to effect a change in how a group might be perceived and represented. Turning points issue from unlikely sources, for unexpected reasons, full of contradiction. We soon grow accustomed to them and recalibrate our expectations accordingly. It’s the same ambition that unites this small nation of archetypes that constitutes the Harold & Kumar series: incestuous farmers enjoying a preprandial toke, straight-A study groups, the drugs vacuum that is Neil Patrick Harris. It’s the aspirational ethos — a faith that there is always a new high.

Previously from Hua Hsu:
Harbaugh vs. Schwartz: Coach Fight!
Waiting for Radiohead
Varieties of Disturbance
When They Were Kings: Paid in Full to Tha Carter IV
Never Been in a Riot
Watch the Throne: Let Them Eat Cake