The Sports Book Hall of Fame 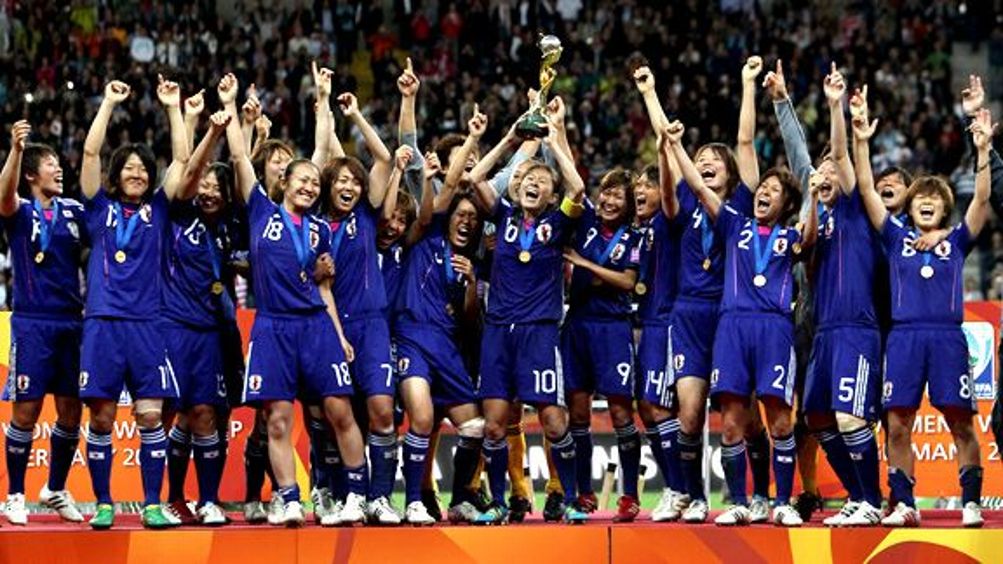 Jenna Pel on the unraveling of the U.S. women’s national team.

The United States’ loss to Japan in a penalty kick shootout in the final of the 2011 FIFA Women’s World Cup might have read like a crushing and capricious defeat. But it didn’t feel like it, perhaps because the more deserving side won. To hell with national allegiances, it’s true.

It was easy to feel spellbound by Japan’s mesmeric style of play (even if the U.S. mostly stifled it on the day) and the remarkable story of bona fide underdogs playing against world superpowers (or so says the perception) to lift a nation reeling from unthinkable disaster. But weepy sentimentality aside, the result remains just. The best side won; the best in both the final and throughout the whole of the tournament.

The U.S. team’s performance in their first final since 1999 alternated between the magnificent and the mad. For parts of the match, the team played elite level — they controlled the run of play, completed long passes and made damaging runs down to the wings. Players who have met the ire of unimpressed fans (namely central midfielders Carli Lloyd and Shannon Boxx) stepped up and prevented Japan from settling in a discernable rhythm. Surprise starter (and total It-girl of the moment) Megan Rapinoe strutted around Japan’s outside backs and sent in crosses with pinpoint accuracy.

But when it comes to the USWNT, there just always has to be something that prevents the team from truly taking control, especially when things are going well. In the first half of yesterday’s match, the team simply could not finish their scoring chances. These opportunities came from the interchangeable tactics that saw the USWNT transition from full-throttled attack mode to a stout defensive posture with mechanical-like exactness, but, frustratingly enough, yielded no goals.

In the second half, the USWNT were due a goal and given how broadly the soccer gods smiled upon them in their thrilling semifinals match against Brazil, it simply had to come. And it finally did, in the 69th minute, when 22-year-old starlet Alex Morgan added another fine effort to add to her growing repertory of lovely, dramatic goals.

But then the tension grew on the field and the USWNT’s demons came into play. Fresh off a one-match suspension, center back Rachel Buehler played the role of the unwitting villain once more as her defensive misplay led to Japan’s first goal of the night. It was a disheartening sight from the aspiring doctor who had been the team’s most solid defender the year prior.

Extra time beckoned. There was simply no way Abby Wambach was going to walk off the pitch without a goal, and a bullet header, to be specific. She did just that, but the USWNT’s lead never seemed truly secure. The swagger, the “we will smash you with our Americanism” that had been on display in the Brazil match was nowhere to be found. With the USWNT scrambling around to defend a heightened Japanese attack, it became impossible to determine which team was playing in their third World Cup final and which was making their title game debut.

The U.S team’s increasingly disoriented defensive play wasn’t helped by an apparent injury to goalkeeper Hope Solo. The icy Solo (who has recently been the recipient of several marriage proposals) crashed into the ground after a challenge for the ball. The team medical staff rushed to her aid. Perhaps their concern was well-founded. Last year, Solo underwent surgery for a shoulder injury. The operation was scheduled so that Solo could recover in time for the World Cup, and the United States’ first-choice goalkeeper appeared to be in top shape in the games preceding the match.

But Sunday’s knock appeared to have affected Solo’s laser-sharp focus and mobility. With just three minutes left in the match, a ragged U.S. defense snapped as Japan’s captain Homare Sawa broke through for the second equalizer. Solo was unable to get a glove on the shot in time. The goal seemed to shatter the confidence of the U.S., a team that has been known to get rattled fairly easily.

Coach Pia Sundhage might not have helped much during the penalty kick shootout. She elected to have Shannon Boxx lead the line, though Boxx had missed her initial kick against Brazil (she got a redo in that game, thanks to a technicality). Japan goalkeeper Ayumi Kaihori batted away Boxx’s ensuing kick. Next up was Carli Lloyd, who appeared shaken by her central midfield partner’s err. Lloyd skied the shot over the crossbar and looked on in dazed horror. Solo managed to block the subsequent penalty kick, but the United States’ hopes rested on the diminutive shoulders of 23-year-old Tobin Heath, who had been on the pitch for a mere 16 minutes. Miss. It wasn’t officially over yet, but the U.S. team had pretty much blown its chances.

The Nike television ads featuring the U.S. women’s national team touted their indomitable will, using the slogan “Pressure Make Us.” In an ironic twist, pressure made Japan. It broke the U.S.

The U.S. had played their best offensive soccer of the tournament, and it still wasn’t good enough to beat the Japan side. The team’s first half profligacy had played directly into Japan’s hands. Japan was content to sit back and absorb pressure without breaking their trademark cool. The U.S. team’s vigorous performance would probably be good enough to break down any opponent in the tournament. But not these opponents.

Japan’s defense wasn’t as sterling against the U.S. as it had been in the team’s upset against Germany in the quarterfinals, though it didn’t need to be. The U.S. team’s shots were denied by either the side netting or the crossbar more than they were by Japan’s back four. It didn’t even matter that the U.S. had essentially neutralized Japan’s creativity in midfield and controlled most of the possession. Sundhage’s team struggled to produce much end product, while Japan won with exactly that.

Precision and confidence were rewarded, and it was a thoroughly appropriate way to cap off what has been an enthralling three weeks. Much like the whole of the tournament, the title game was exhilarating, suspenseful, shocking, exasperating, and heart-wrenching.

That last adjective in particular, because it means it’s all over now. And for a sport that is now threatened with the prospect of returning to obscurity, that hurts.

Jenna Pel covers women’s soccer for the blog All White Kit. Follow her on Twitter at @jenna_awk. 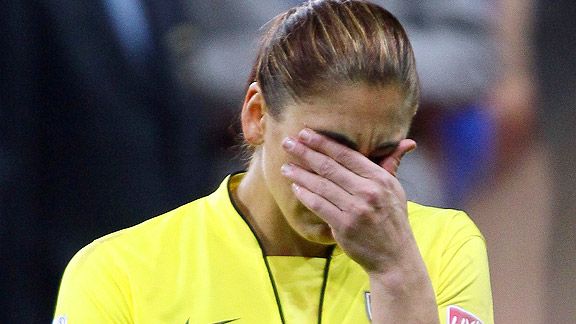 A team’s style of play is often dictated by the circumstances they find themselves in and for the past two weeks, the USWNT had played the role of cardiac kids, breaking the speed limit with their seat-belts off, windows down. But after Alex Morgan scored in the 69th minute, finally finding the back of the net after more than an hour of target practice, the USWNT would have a new part to learn: that of designated driver.

Going up 1-0 in a soccer match, especially in a Cup final, is the opposite of Miller Time. Either you can pursue a decisive second goal or you can Alamo-up, sit back, and defend with everything you have. But if a team cannot commit to either of those strategies, even the most lion-hearted cabal of warriors can quickly turn into a bunch of stoners staring at a vending machine.

On Sunday, the USWNT choose a third option: none of the above. Or a little of both. However you want to call it, it didn’t work out.

At 76:40, the broadcast of the match cut to a shot of Pia Sundhage standing on the sideline. If she were any more rigid, birds would have started landing on her. Given what was at stake, Sundhage’s stoniness was certainly understandable — her team was 15 minutes away from claiming the World Cup. But the stiffness was contagious — from that moment forward, rigor mortis seemed to spread onto the field and into her players.

If you hit pause on your remote at 78:36 here’s what you would see: Aya Miyama on the ball, with Heather O’Reilly chasing her from behind. The Japanese midfielder is looking up with nothing but green lights in front of her. Three Japanese attackers have the attention of the back four, while Megan Rapinoe is legging it back to the right flank to mark an open Japanese winger. Japan becomes the proactive team. All of a sudden, the abandon and heroism with which the U.S. went forward needs to be translated into defensive discipline. The immediacy of the moment putters out. Nobody on the USWNT knows what to do.

Instead of playing to the wing, Miyama has a go but, like watching a boxer establish his reach, she dumps the ball right into Hope Solo’s waiting arms.

In the beginning of the 79th minute, as the U.S. backline tries to stroke the ball across the field, Japan’s up-field pressure becomes more evident. Rapinoe — who should still never have to pay for a beer for the rest of her life — is like a pair of wind-up chattering teeth: you kind of want to point her in a direction and let her head that way. Watching her play hot potato with Shannon Boxx and Christie Rampone on the left flank, you can practically hear the Jaws theme music playing in the background. Something terrible is about to happen.

As the USWNT gives the ball away at the halfway line at 79:28, it allows Japan to settled into a game more suited to their training. The Japan women’s national football team was drilled to play possession football in closed quarters, not unlike say, Arsenal, and the USWNT seems to be begging for an exhibition of those very qualities.

Over the next half minute there is one decided difference in the way the two sides deal with the ball. Japan has their heads up, looking towards goal, while the USWNT seems to be looking at the clock.

The shark comes out of the water at 79:44. Rampone, the veteran conscience of the team, the steadying voice, the connection to the past, makes a rookie mistake. Instead of clearing downfield and making Japan start from its own end, she tries to play the ball to a teammate, on the grass, in her own half.

Nahomi Kawasumi jumps into the passing lane and as soon as she gains possession she sees the most mouthwatering sight there is for an attacking player: two of her teammates, headed toward goal, with the opposition defenders headed the wrong way.

Kawasumi’s perfectly weighted pass keeps Yuki Nagasato onside. To Amy LePeilbet Rachel Buehler, Nagasato’s cross must look like a car spinning out of control. At 79:54, LePeilbet Buehler tries to clear, but instead squares the ball in front of Solo’s goal. A second later, a late arriving Ali Krieger tries to save the day, but only makes the play easier for Japan, teeing up Miyama for an easy goal.

On the replay you can see Krieger turn, as the ball is crossed in, noticing Miyama making her run. That’s her marker, but for a split second, she froze and tried to decide: the ball or the player. And much like the way her team had played in the uneasy, creeping minutes leading up to Japan’s equalizer, she chose neither.

This is what happens when you go up 1-0. You start asking questions instead of searching for answers. You start overthinking, overplaying, overconsidering. You stop doing. You just sort of stop.

Filed Under: Celebrities, Chris Ryan, College Sports, People, The U